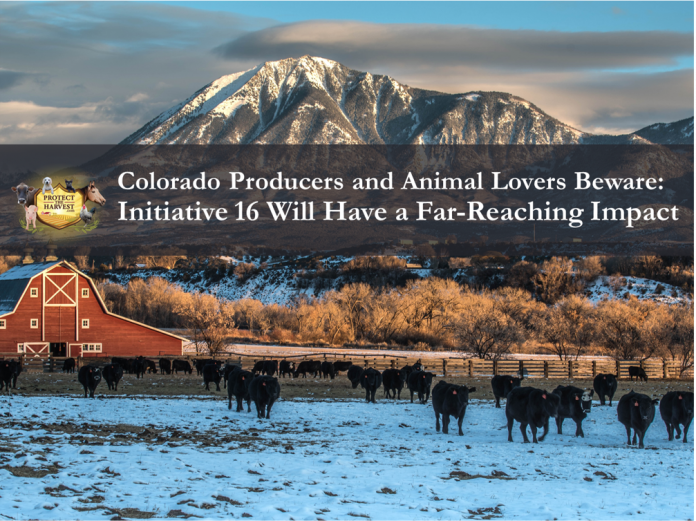 As soon as the Colorado Ballot Initiative 16 was proposed, several people in rural communities spoke out against it. Last week, the Teller County Commissioners passed a resolution to officially oppose the initiative to protect the county’s livestock, poultry, and sustainable fish industries.

The initiative that could be on the state ballot in Nov. 2022 has seen vast opposition from several agriculture and livestock representatives as well as Coloradans for Animal Care, Colorado Farm Bureau, the Colorado Horse Council, and the Livestock Marketing Association. Currently, the Colorado Pause group has sponsored the initiative and they are working on getting enough signatures from Colorado residents to put it up for vote.

The resolution that was passed last week urged people to tell their friends not to sign the petition and to try to keep the initiative off the 2022 ballot. And if it does get on the ballot, the county asks everyone to vote no. However, it was mentioned that political leaders think that if the initiative makes the ballot, it will pass due to voters in urban regions of the state.

The general consensus by the commissioners was that if the initiative passed it would harm several local industries. “The Colorado lamb industry is world renowned,” County Commissioner Erik Stone said. “There is New Zealand lamb and there is Colorado lamb. Those are the two global leaders in producing the finest quality lamb for consumption in the world. That would go away obviously.”

Commissioner Dan Williams said that he was concerned that if the initiative was passed it would make certain common industry practices illegal. “Essentially the title sounds good, but what this really does is criminalizes veterinarians for example,” Williams said. “With domestic pets you will no longer be able to get your dog spayed or neutered. You would become a criminal. This is ridiculous. I will say that the current governor of Colorado opposes this as well.”

The main purpose of the ballot initiative is to change state laws regarding the treatment of animals. The new laws the proposal suggests would make several practices illegal including artificial insemination and conducting procedures to save calves and heifers during birth.

According to one rancher that spoke up during the meeting, some of the procedures ranchers and vets have to conduct can save their animals’ lives. The new ballot initiative would strictly limit what ranchers and veterinarians can do to help livestock.

If passed, the new laws would also define the life span for certain animals and make it illegal to slaughter an animal until it has lived 25 percent of its lifespan. For example, the lifespan of a cow would be defined as 20 years, so it would be illegal to kill a cow before it was five years of age. Many experts argue that the change to the law would make Colorado’s veal industry virtually nonexistent.

All in all, many political leaders in the rural parts of the state feel that the initiative would create too many hoops for those in the agricultural industry to jump through. Including fish in the definition of “livestock” is also a part of the initiative.

“Lots of the items in this ballot initiative are somewhat ridiculous,” Board Chairman Bob Campbell said.

The rancher that spoke up at the meeting also said that if the initiative was passed ranchers would continue to do what they are doing now anyways. He said that people in the industry would just start transporting their animals to other states where those common practices are still allowed.