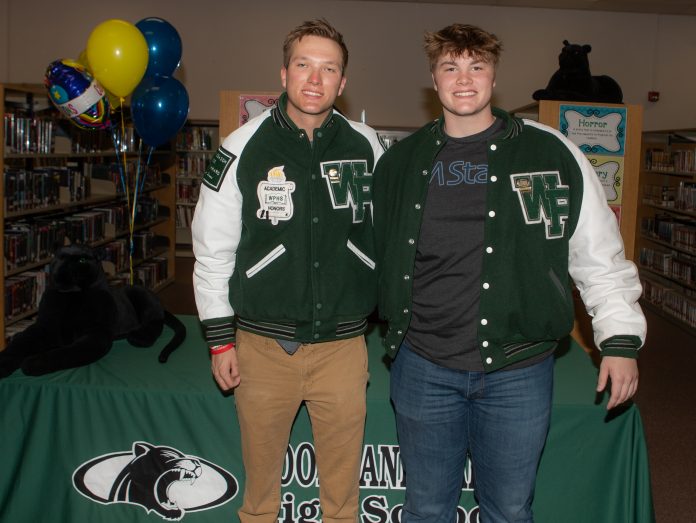 Cameron Chase signed a contract to play baseball at Doane in Nebraska, and Griffin Owens agreed to play football at Minnesota State Community College. During the ceremony, pictures were taken of the players with their families and teammates. 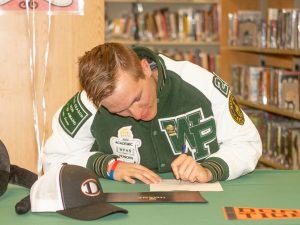 During Chase’s signing, a previous pitching coach gave a speech on video to congratulate him. Athletic Director Joe Roskam, who led the ceremony, mentioned what an accomplishment it was for Chase since Woodland Park was unable to play their normal baseball season last year. 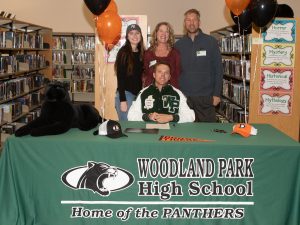 Roskam also mentioned that the pitching coach spoke on behalf of Chase because the baseball player’s former coach, Neil Levy, passed away last August. During the ceremony, pictures were shown of Levy being Chase’s coach as early as elementary school.

“With him (Coach Levy) passing it has definitely been a motivation,” Chase said. “The day he died I actually hit a home run. It felt like he was there with me kind of watching over me and it was really cool. He has always been a big part of my life, and he will always be a memory as a great figure to me and my childhood.” 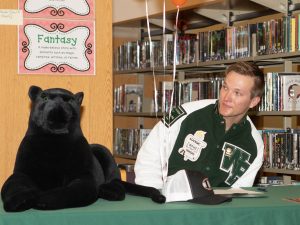 Chase said that he has kept in shape during the pandemic by playing on club teams. He plans being a pitcher in college, but he might play other positions such as outfielder.

Chase said that he chose Doane in Nebraska because it offered both what he wanted in a school and baseball program. The baseball star does plan to play on the Woodland Park Panthers baseball team this season, and he won’t start playing college baseball until this fall. 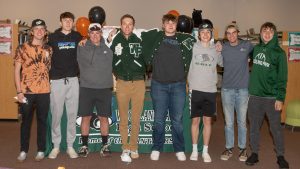 During Owens’ signing, Roskam who has been his coach for the last four years, gave a speech and said that the student’s hard work is what got him to this point. “I remember when he was a tubby little kid as a freshman that couldn’t even lift the bar,” Roskam said. “And now he has a goal of squatting 500 and moving people. He is one of those that said, ‘hey no matter what odds you have if you put your nose down and do the right thing and work hard you can make it happen.’ For that part I am extremely proud about today it is a big deal.” 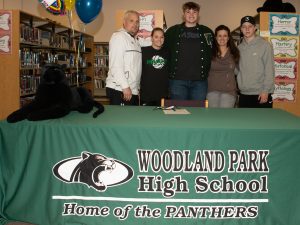 Owens said that his decision to choose Minnesota State Community College had to do with the team’s head skippers. “Honestly, it was the coaching staff,” Owens said. “I appealed to the way they go about their business and handle things. There are lots of similarities between the head coach up there and Coach Roskam. And honestly at the end of the day it just felt like the best fit for me.”

According to Roskam, the one main aspect that helped Owens get to the point where he was signing to play college ball was his ability to overcome adversity. “That dude is a story of an overcomer,” Roskam said. “It’s extremely special, if you knew the whole story it’s awesome and maybe even movie worthy.” 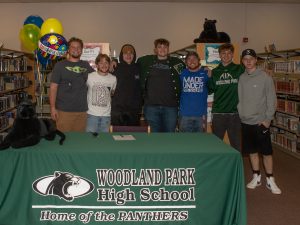 Owens plays offensive tackle, and he plans to ship out and begin practicing in mid-May.

Joe Roskam announced that he will be resigning in his double role at the Woodland Park High School as their athletics director and head football coach. He gained quite a reputation during his stint with Woodland Park for the last decade, and was known for his passionate role as the head football skipper.

Altogether, Roskam sports 21 seasons as a head football coach with Woodland Park and other schools.  He previously even led the Cripple Creek-Victor football program for four seasons, when they competed at the 11-man level.

Next school year, Roskam is moving on and taking a position as a dean at Sierra High School. He won’t be involved in running their football program. Roskam previously coached football for Sierra, but he has been the coach at Woodland Park for the last 10 seasons.

In 2019, Roskam led the Panthers to earn their first winning overall record since 2008. In 2020, Roskam was awarded the honor of the Denver Broncos High School Coach of the Week when he led his team to victory over Alamosa in week one.

Also, both of his sons, Dominic and Braden, played for him in fairly stellar and high profile roles.

Both the head coach and athletic director positions at the high school are now open to applicants. According to press reports, Woodland Park Principal Kevin Burr hopes to have these positions filled by June 1.