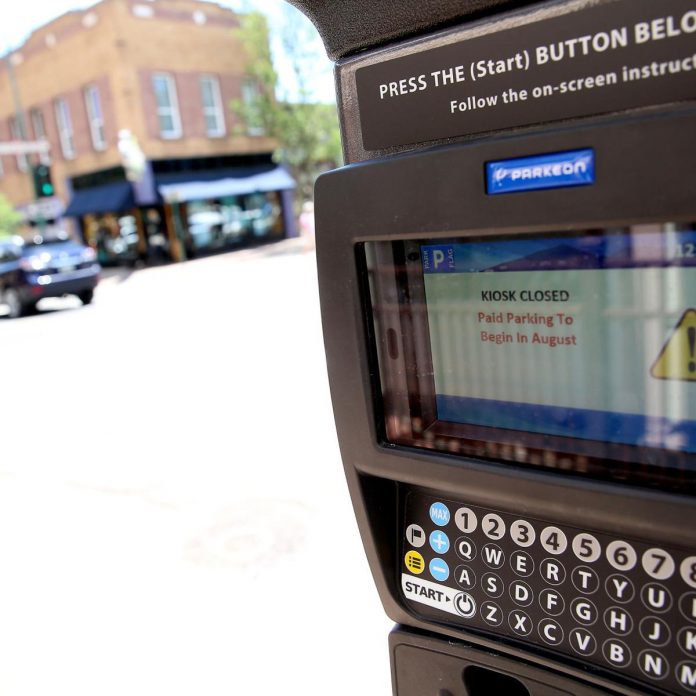 The days of free parking in Green Mountain Falls for hikers and for extended stays are screeching to a halt.

And possibly, the view of Green Mountain Falls as a quaint, small village in the mountains could be ending, as the town will soon operate in a big-city resort climate, so bring your wallet and smart phone when you come downtown.

If a series of agreements are finalized tonight (May 4) between the town and the Interstate Parking Company of Colorado LLC, GMF will become the first community in the Ute Pass region that charges visitors by using a limited, paid-parking system. In fact, the  new paid-parking plan, with the forthcoming arrival of kiosks, state-of-the art equipment and special online technology and parking ambassadors, could get underway within two weeks, if town leaders give the okay.

The concept, which should not impact residents and short-term restaurant and shop patrons, has sparked much controversy and a wide variety of opinions.  Paid-parking proponents say it will help manage the crowd explosion, associated with many more hikers the town experienced last year following the pandemic. Critics, including key business operators, contend that the system will drastically change the character of Green Mountain Falls, and signal a strong anti-visitor, hiker and tourist message.

One fact remains certain: Tuesday’s meeting could ignite many verbal sparks, as opinions are quite passionate about this issue.

On the evening of May 4, the Green Mountain Falls Board of Trustees will grapple with one of their most extensive agendas in months. Altogether, the trustees are scheduled to approve a detailed contract with a major nation-wide parking contractor, Interstate Parking, okay new parking-related code enforcement rules, swear in a new police officer (as part of the enforcement plan) and  set the stage for the new program to get underway in two weeks.

Contrary to previous opinions by residents, town leaders won’t be considering a variety of parking proposals.  The negotiations have already occurred between the staff and the recommended contractor. Interstate handles the parking systems for Idaho Springs, Breckenridge, Keystone, Evergreen and  many resort communities throughout Colorado and the country.  According to information in the forthcoming presentation, the company sports 225 locations, manages 35,000 parking stalls, has five Colorado offices and 300 employees.

According to Mayor Jane Newberry, the town formed a committee to review the proposals, which included the town marshal and head manager. She said GMF did receive many bids from companies interested in pursuing the paid-parking system, now being labeled as managed parking.

However, the May 4th agenda packet makes no mention of the list of other contenders for the deal . Based on a staff memo by Town Manager Angie Sprang, GMF has already concluded negotiations and now wants the board’s approval to “roll out” the parking program.  The town manager noted that the preferred company will be investing close to $200,000 in infrastructure to make it work.

“Like all our municipal operations, our goal is to create a win/win partnership between GMF and Interstate for years to come given the extent of up-front investment and staff’s long-term belief in the benefits managed parking will bring to our wonderful community,” said Sprang, in her memo.

A Huge Change for GMF

The new parking venture, though, is one of the more ambitious steps the town has ever taken. To date, it has received a lukewarm response by local business operators and even certain long-time residents.  Some have even called it a business killer. “We are a town with dirt trails and a few restaurants,” said Ben Stephens, the owner of The Pantry, restaurant, in a previous interview.  “This is ridiculous.”

But Newberry and current leaders say the town can’t operate in a status-quo manner, contending it must manage its crowd and parking situation better. “The cat is out of the bag,” said the mayor, regarding GMFs emergence as a major hiking destination.  This summer, the town will also enhance its tourist offerings even more with the new James Turrell Skyspace installation.

Altogether, about 250 parking spots downtown would come into play. The parking facilities will be managed 9 a.m. to 5 p.m. with the first two hours of parking free.  The maximum charge for a full-day of parking is listed at $34, according to the proposal.

The company prides itself in top-notch technology, with no use of any meters, and such perks as Tap N Explore, permitting people to use their smart phones for fees or info on parking rates and even trails. It wants to manage the parking in a low-key manner. In addition, the parking spots won’t be marked.

Still, many unanswered questions persist about free parking for residents, and how that will work in an easy-to-understand manner. Plus, the initial talks discussed a weekend-only implementation. That restriction isn’t mentioned in the current proposal.

The net revenue from the projected parking revenue, estimated at between $100,000 and $400,000 a year, will be shared 50/50 by the town and the contractor. The pilot contract will last for two years