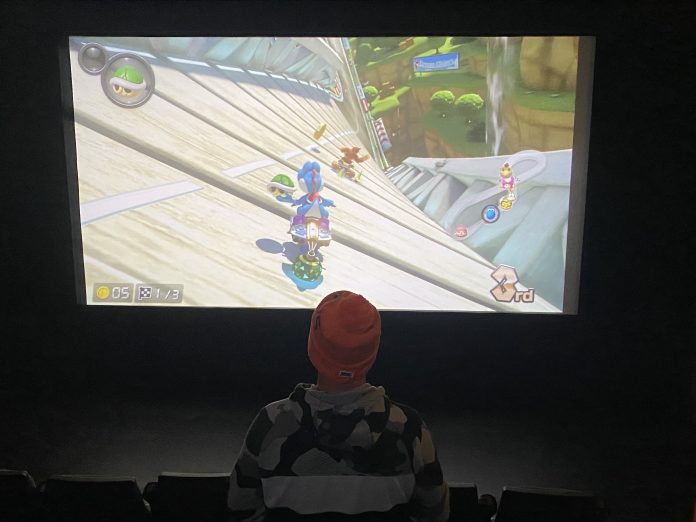 During the coronavirus pandemic, the mandated shutdowns took a toll on several types of businesses, including movie theaters.

First off, the theater industry took a hit when they were forced to close last year. Then, once theaters opened up to limited capacities, there were not many new movies available because Hollywood had ceased big screen productions.

But now that capacity limits have been changed and movie producing has started back up, most theaters are swinging back into full throttle. Locally, Gold Hill Theatres in Woodland Park, located at Gold Hill Square North, is now open seven days a week. Plus, the popular local theater hub has come up with new ideas to generate business.

On April 20, Gold Hill Theatres hosted a day-long event that introduced their new video gaming options. On that day, the theaters opened their doors at noon and invited the public to come in and play a variety of video games on the big screen free of charge. 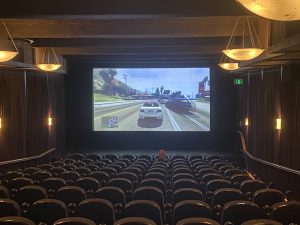 The theaters hosted favorite video games, such as Rock Band, Mario Kart, Forza, and Red Dead Redemption. Players enjoyed an intense experience while playing the game of their choice on the giant screens with surround sound. 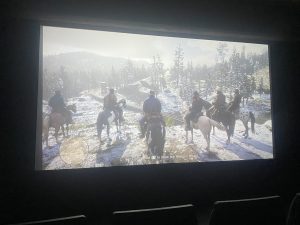 The event also featured the Red Diamond food truck during the day, so people could also enjoy quality local food while taking a break from trying the games. Later in the afternoon and evening, the theater hub showed four different classic movies at a discounted price.

Now Gold Hill is offering ways to rent the theater for people to play their favorite video games. “We have always been a community-based theater and we were thinking of things we could do besides movies that get some different people involved,” the theater’s owner Josh Overton said. “Video games are definitely a prevalent part of our youth. It is something I have done my entire life pretty much and I just thought it would be amazing. My buddy and I tried it out and it was one of the cooler things I have done.”

People have the option to bring in their own video game system and games, or they can rent the theater’s video game systems. Recently, someone rented a theater for their birthday to compete against their friends in “Rock Band.”

During the pandemic, Gold Hill Theatres kept their doors open and they offered the locally produced films “Rook” and “Heart of Christmas.” Gold Hill also hosted showings of old, classic films on holidays.

“We are trying to do something special every month or every couple of months,” Overton said. “It is a cheap option for people to come in and see a nostalgic film.”

This summer Gold Hill Theatres will be hosting a special talent show event. People can go to the theater and portray their talents live to a limited audience. The event will also be live-streamed on the Gold Hill Theatres’ Facebook page and recorded so people can vote for their favorite contestants virtually.

The company is also planning on bringing back some of their events that were cancelled due to the pandemic. Soon the theaters hope to bring back their special showings for senior citizen and children’s audiences. Their Movie House Music nights during which people can enjoy a live musical performance, a drink and a movie for one price are also slated to return soon.