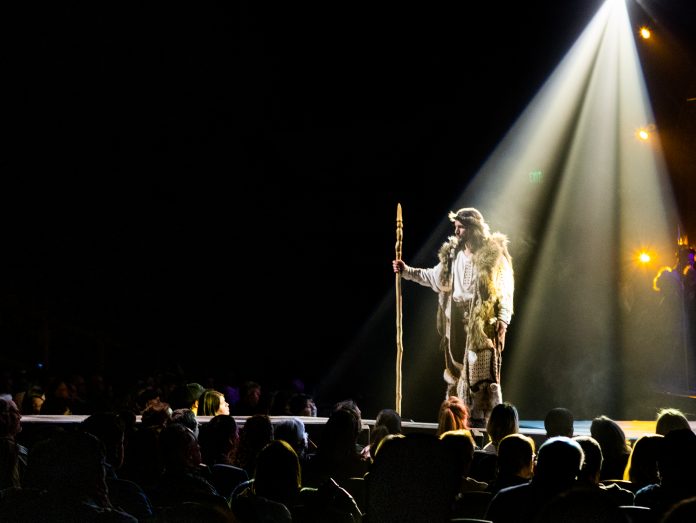 “God with Us” Honors Easter Weekend

The Charis Bible College in Woodland Park brought back their famous “God With Us” presentation last weekend, in a move to prove that live performances have officially returned to the local stage.

In 2020, the live performance was cancelled due to the pandemic threat and the mini-lockdown regulations.

After a year hiatus, producers Robert and Elizabeth Muren returned their crew to the stage last Friday, Saturday, and Sunday. Those wanting to go were required to get tickets in advance as the capacity was limited.

This year the live performance was different from in the past with the college opening up the auditorium’s doors early for their spring market. Those going to watch the show could arrive early and browse around the market that featured several local artisans.

The market had dozens of vendors that sold a large variety of goods. At some tables, people could find fresh jellies and jams, and others contained jewelry and clothing. The college also had their cafes and gift store open an hour and a half prior to the show and at intermission. Shoppers had the choice of browsing the market and buying local goods before the show and during the 20-minute break.

Before the show, it was also announced that this year’s performance was being videotaped. The college plans to put together a film version of the live performance to be available to purchase on DVD.

Due to it being taped, the host asked that people avoid the cameras if leaving the show and everyone was encouraged to clap and cheer to give the taping a live feel.

The crowd was also warned before the show that there were some gruesome scenes, as it was a performance written to depict what happened on the Easter holiday. The story starts out fast as it quickly gets into song and dance pieces. 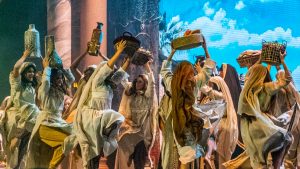 The story starts with the aging Apostle Peter telling his tales of when Christians were being persecuted in 64 A.D. Rome. At one point, Peter and his group get arrested and are held prisoners to be executed. The story continues on and tells different tales of how the prisoners’ faith gets tested.

The locally written and produced presentation depicts the story of Easter using a combination of videos, 3-d graphic backdrops, and live action. The performance contains several song and dance numbers with dozens of people on the stage dancing at times. Actors and dancers can also be seen traversing through the auditorium making the show a unique 360-degree experience. 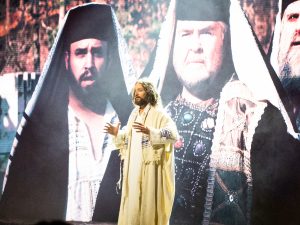 One notable scene is the one that tells the story of David and Goliath. The producers used the graphics technology they have to portray the giant Goliath on the big screen. The show then incorporates live action and animation when the live actor playing David famously slaughters the giant with a stone.

The return of the live version of “God With Us” marks the comeback for live events at Charis. The bible college will most likely go back to having most of their conferences and live shows, as they did before the pandemic struck in early 2020.