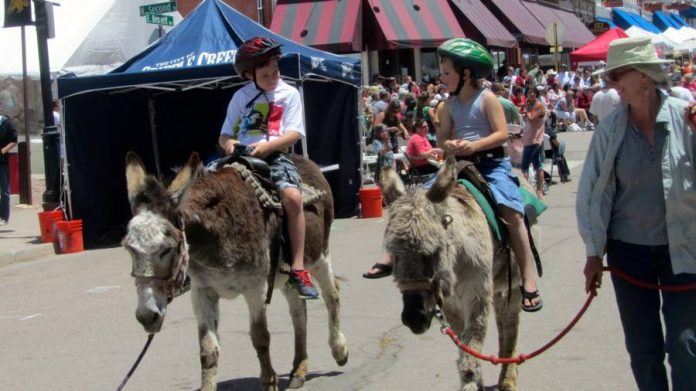 Despite the financial struggles of southern Teller, the 90th anniversary bash for Donkey Derby Days 2021 is a go.

That’s according to a recent announcement made by the even sponsors, the Two Mile High Club. The club  informally cares for the town’s herd of donkeys, rated as probably the biggest attraction for the district.

Last year, the famous annual event, considered Cripple Creek’s prime historic festival, was first rescheduled and then cancelled due to the coronavirus pandemic threat. And this year, the fate of the event was questionable due to the city of Cripple Creek opting not to provide funding for any events in 2021, except the July 4th celebration.

However, the club was able to come up with a way to host the event on Aug 14-15, and by scaling it back. This year the main street will not shut down, and there won’t be a parade or a live band playing.

But according to the Two Mile High Club Executive Director Curt Sorenson, the new event will still celebrate 90 years of having a donkey race in a different way than what has been done before. “In order to make it happen and still have a 90th anniversary celebration of Donkey Derby Days we are going to scale it back,” Sorenson said. “We are going to have donkeys in pins at the Cripple Creek District Museum, at the city hall park, and at the jail museum. So, there will be events scattered around town with displays and merchandise for sale at the district museum. And then, we are going to schedule a donkey race somewhere in town but that has yet to be decided.”

Sorenson said that the club does not race their own donkeys, they actually import other donkeys to race. He also said that there will still be vendors set up around town just not in the streets. And, there will be a beer garden set up for the event.

Last year, the club was worried about how they would care for and feed the town’s donkey residents without having the Donkey Derby Days’ event. This is their big fundraiser and main source of income. But the director said that the donkeys were able to survive with other donations the club received during this difficult period.

Since the pandemic struck, the club has received help from several residents and businesses including the Newmont Mining Company and several casinos in the area. At one point, a man from Woodland Park gave the club nearly $1,000 to pay the club’s electric bill. And, a group of local musicians held a benefit concert for the Cripple Creek donkeys.

The club also did well with their 2020 pandemic version of their annual aspen leaf tours. “This last fall we had the most successful aspen tours ever,” Sorenson said.  “We tried a new program where we had self-guided tours and we had people stationed all over the Gold Camp District. We just did very well on our aspen tours this year, much better than normal.”

“We have had very, very good participation in the way of donations from a large number of benefactors,” Sorenson said. “Our donkeys are not going to starve this winter. They are just fine. We have taken care of their veterinarian needs and their farrier needs.”

The donkeys are financially taken care of for the rest of the season and the club hopes to provide more funding for them through the Donkey Derby Days event. According to Sorenson, the only thing they need for the donkeys now are units to better store hay for them.

The club takes care of all the town’s donkeys’ needs through donations and their fundraising events as they don’t receive any consistent funding from the city or other government agencies. The club is looking for people to help volunteer for their event this year, and anyone who is interested is asked to visit their website at cripplecreekdonkeys.com.