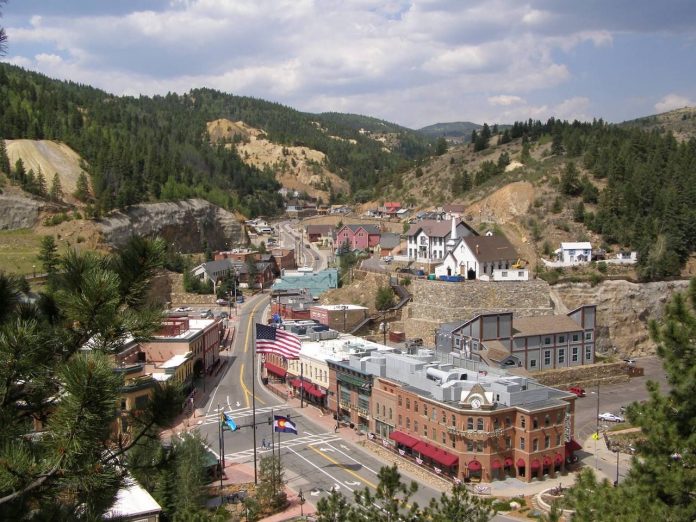 Having grown up in Teller County my first experience going into a casino occurred in Cripple Creek. I have been to Las Vegas a few times and other casinos, but until recently; never partook in other Colorado gaming establishments outside of the Creek.

Therefore, the only things I really know about the Black Hawk and Central City area is what I have been told by other people.  Some have  told me is that Black Hawk is “better” because it is “more like Vegas with bigger casinos.”

I disagree with those “better than Cripple Creek”  views.

Recently, I decided to take a trip up to Black Hawk for a night and check out the area. Although I didn’t spend a lot of time in the two towns, I spent the night at the giant Ameristar casino in Black Hawk, and then went and hung out in Central City the next day.

The first thing I noticed about Black Hawk was that, although  it sports “giant casinos, it is not very large at all. The city basically consists of two strips of large, high-riser casinos and that’s about it.

But once you get into a casino, they definitely look more like you are in Vegas. The large single and double-floor gambling spaces are completely different than what gamblers find in Cripple Creek.

Another plus to Black Hawk is that the amenities available in the casino far exceed what Cripple Creek has to offer. Gamblers have more choices of restaurants, including fine dining options and all-you-can-eat specials. There are also currently more casino hotels that offer pools and spas as amenities.

One thing I especially remember about the Ameristar was their giant, state-of-the-art sports book bar. The area has bar seating and other tables where sports betters could watch games, they had skin in on a 24-foot screen or on over a dozen others.

About a mile up the road in Central City, the town kind of resembles Cripple Creek a little more than its neighbor. There is more of an historic aspect to the town (like Cripple Creek), and there is more to it than just casinos. Central City features at least one museum, and a handful of recreational marijuana dispensaries.

The casinos in Central City made me feel like I was at home more than those in Black Hawk did. The town has smaller casinos, and their Century Casino drew comparisons to Cripple Creek. Central City’s Century was a little bit bigger than the Creek’s, and they had a bigger variety of machines.

Central City has older machines and ones that do require as much money to get into the game. The town’s Century boasts about the fact that they have the only Blackjack table in the area that has a $5 minimum (all others are $25 and $50.)

My biggest complaint about Black Hawk was basically that it was too much like Vegas. You can tell that the casinos within the city cater more to the high-roller types, as the trip was on the expensive side.

To get a hotel on a weekend night during spring break would run someone about $300-$400 per night. Luckily, I booked on a Thursday, but the room still was over $160 after taxes and fees.

Then, once you get there, get ready to open up your pocket books. All of the meals, while nice and a little on the fancy side, were quite pricy. The other thing I noticed was that most of the newer machines in the casino had much higher minimum bets than I am used to.

I also didn’t like the fact that to play black ack you had to bet at least $25 per hand, which means that a a $100 dollar bill gets you a measly four hands of play. And, the fact that they didn’t have any tournament poker, and it was only cash games. This meant that playing poker was designed for the big spending high-rollers.

The other thing I didn’t like about Central City and Black Hawk deals with their rather Vegas-like coronavirus restrictions. They were the same as Cripple Creek in the ways that they conduct temperature checks on all patrons before entering the casino. But with the bigger crowds, it was not unusual to see a huge line just to get on the gambling floor and play.

The masks laws were also different because in Cripple Creek patrons must wear a mask until they get to their machine, and then they can take it off while they are gambling. In the two northern gaming towns, gamblers must wear their masks at all times and can only remove it for a second to take a drink, and then they must immediately put it back on. Even while eating in the restaurants, signs on the tables ask customers to wear a mask when the server comes to the table, and at all times unless actively eating or drinking.

Overall, I think I just like Cripple Creek better because it is less crowded and more affordable to play and stay. I also like the fact that Cripple Creek has more residents than both Black Hawk and Central City combined. I personally think that the presence of old-time shops, museums, and hiking trails make Cripple Creek slightly stand out on top of the state’s three gambling hubs.