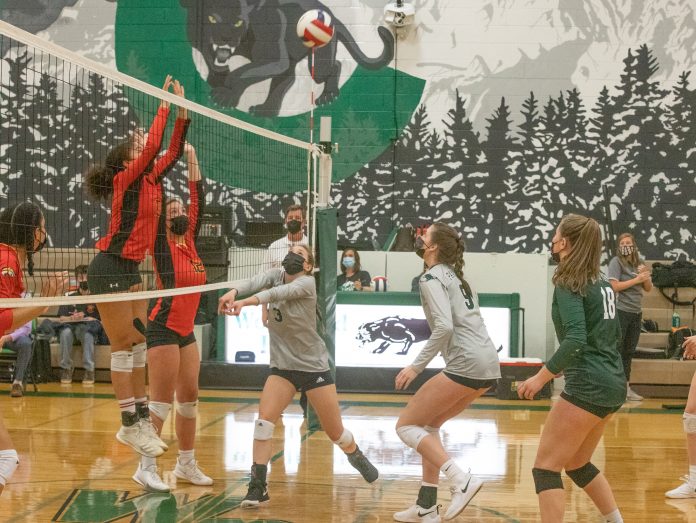 The Lady Panthers volleyball team is on track for another great season.

Many sports insiders are already starting to predict that the girls may once again be a championship team, with a state title within their grasp.

So far, no other team they have competed against  has matched up to the Panthers’ net skills. The ladies so far have won their first six games. And, all but one was won in the first three matches, meaning the girls beat all teams except Harrison 3-0.

Last week, the girls played matches three days in a row starting Tuesday. After they came back from a short hiatus for spring break, the Lady Panthers shut out Widefield, Mesa Ridge, and Palmer during their three straight days of games.

Earlier in the season, the team’s coach Stacy Roshek said that their main strength is defense. Senior Trinity Mcabee currently leads the team with 45 kills and 13 solo blocks. Sophomore Sydney Roshek leads the team with 101 digs and Allie Tring falls in second with 65.

On the serving side, Sydney Roshek is in the lead with 26 serving aces. Tring and Macabee have also come up with 13 and 14 serving aces respectively. Sophomore Giana Roskam is a big key when it comes to ball handling as she has racked up 92 assists.

The girls currently have a 5-0 league record and they are battling for the first-place spot with Coronado. Coronado is also undefeated in their 4A Colorado Springs Metro League. The Lady Panthers have eight games left of their season with seven of them being league games. The team still plays Coronado twice this season, which could decide who gets the league’s top spot.

This Tuesday the ladies play a big, must-win match against the high-rated 3-0 Coronado Cougars at home. Then, Thursday they take on the 1-2 Canon City Tigers. This is team the coach said she was worried about.

Before the soccer season started, the WP coach said the 2021  team sported a young squad, and one that is still learning the game.

But the team  actually fooled many skeptics, and got off to a decent start for their 2021 season. They then hit a rough stretch, when they entered their league games.

The Panthers started their season by losing their first game to Ellicott 4-2, but then they answered with a couple of victories. During their second game, they shut Palmer out 4-0. They then dominated against Dolores Huerta Prep out of Pueblo 6-3.

But then, the boys started playing their first league games. Unfortunately, the WP kickers lost their first two contests, giving them a winless 0-2 league record. On March 25, the boys ended their winning streak, when they lost to Palmer 7-4. Then, last Thursday, the team fell again to Coronado 5-2.

Even though the team sits just barely under .500, they still been some star players to  brag about. On the field, junior Alex Vonderharr has stood on top by scoring 11 of the teams 18 goals this season.  Freshman Ryder James has also shown some skill by getting the ball through the goal four times.

The boys only have four matches left to play with two this week and two next week. All of their remaining games are league matches, so they basically need to win them all.

This Tuesday, the team hits the road to play the tough 3-0 Mesa Ridge Grizzlies. Then on Thursday, the Panthers face the not-so-tough 0-5 Widefield Gladiators in a home match that they should easily win.

(Editor’s Note: This article was written to be published last Tuesday and it does not reflect the games played the week 4/5-4/9. Stay tuned for an updated article coming out next week that will include the results of last week’s matches.)