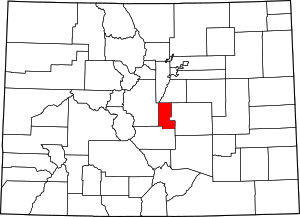 During a special meeting of the Teller County commissioners, a resolution regarding Teller County’s “Freedom from the State of Colorado” passed unanimously with little discussion.

According to the commissioners, the passing of the resolution is the first step in getting out of the “stranglehold” recent state policies have put on local businesses, personal rights and gun owners. All of the commissioners spoke positively about the resolution and they are eagerly waiting the next steps to “set the county free.”

The resolution basically was an announcement to state government officials that Teller County would no longer be a part of the state of Colorado. The resolution quoted a similar resolution that was passed in Weld County to declare themselves as a part of Wyoming.

However, since Teller County is not on the border of another state, its freedom means that it must establish itself as a new state in the country. The commissioners said that more resolutions regarding specifics of the new state including government functions and what the official name will be will be coming over the next several months.

County commissioner Eric Stock said that he personally already started drafting the new state’s constitution and bill of rights. “We need to break free from the laws our tyrant governor and liberal state legislators keep making,” Rock said. “We looked at several options, and declaring our independence from Colorado and starting up our own state was the most feasible option.”

This first resolution is the beginning of a series of probably around 100 more that will come out at meetings over the next several months. The board of commissioners also voted to have meetings on the subject twice a week, many that will be held in secret.

Commission Chairman Bob Camal said during an interview with the Crackpot that the move could be the first step to many more changes. “Today we want to be our own state and we are moving forward with that process,” Cobble said. “But if the United States government starts to follow along the same tracks as the liberals in Colorado, then we may decide to break off as our own independent nation.”

Several local residents like the idea of Teller becoming its own state and possibly its own country. “I think it’s great,” County Manager Cheryl Docker said. “Who knows one day I might be elected governor or better yet maybe even president of our wonderful community.”

The first vote will come out in yet another resolution to take it to the polls on what the new state should be named. County officials will be a holding an election where in order to vote people must cut out random letters from a magazine, glue them on a piece of paper and personally deliver their idea of a name to the sheriff’s office.