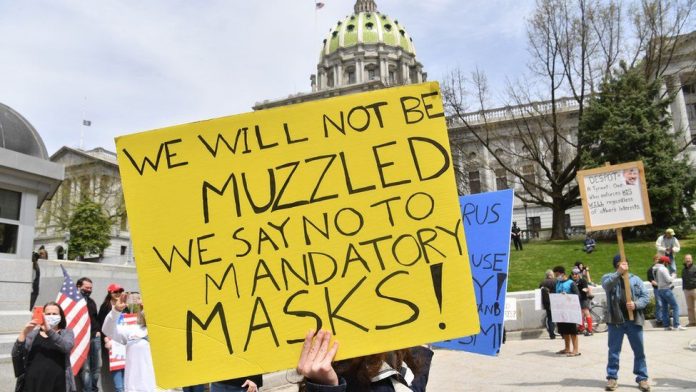 Area Leaders: Time to move on from pandemic scare

Early this week, coronavirus protective masks will be completely barred in all public places in Teller County and the lower Ute Pass area, pending certain exceptions.

During an emergency meeting held among elected leaders from several municipalities and with the Teller government, a region-wide edict was proclaimed, prohibiting COVID masks, unless physician safety orders are issued for individuals with special conditions. In addition, all in-person meetings will resume, unless an emergency occurs.

Area leaders maintain that the pandemic is nearing a conclusion, and it’s time to regain a sense of normalcy.

“The emergency is over,” said Teller County Commissioner Erik Stony.

“The masks and other precautionary measures have been effective for  months, but now it’s time to move on and worry about wildfires and other natural disasters,” said Don Angel, the director of emergency management for Teller County, who cites this as the main threat for the area. “I am rooting for 22 weekends of snow and rain, instead of worrying about mask mandates.”

Unfortunately, in the eyes of many, the masks have become a symbol in the regulated lockdown of the area, a development that sparked more mental health cases locally and devastated the economy.  Cripple Creek almost resembled a ghost town for months, bringing back memories of the way the community appeared prior to limited stakes gaming in the late 1980s, and even following the gold rush boom.

Teller County Sheriff Jason Mikeesell and his agency will begin enforcing the no-mask rule in mid-April.

“Masks are no longer necessary, and they give the county a bad image,” said the sheriff.  “They make everyone look like bandits or refugees from the 1960s.  We have never had a big following here among proponents of the counterculture. This isn’t the place for a Crosby, Stills and Nash or Grateful Dead reunion show. Some of these people with masks look like they have spent too  much time with TMJ staff members, and people like Trevor Phippy, Bob Valpe and Rick Langy. That’s what we call the wrong element. This will give everyone a fresh start and get our economy back and running.”

Initial fines are set at $500 for the first offense, and then sharply escalate. The final punishment too involves mandatory  attendance at Woodland Park City Council  meetings, once in-person sessions completely resume shortly. (Rumor has it that if a person is fined, he/she would most likely prefer a $1,000 fine, then attend the WP Council Circus Show.). A brief education period will occur, outlining the no-masks in public rule, unless a doctor’s order is issued.

“This is the best news I have heard in months,” said Josh Mantey, manager of the Peak View BBQ in Woodland Park. Employees there have gained a reputation for extremely creative mask styles. On the downside,  the new mask prohibition will put a damper on some of the innovative designs’ locals have come up with in protecting their face.

“I can finally breathe again,” said Cripple Creek Councilwoman Melissie Treanarie, who has made it clear for months she struggles with COVID-19 masks.  “I was afraid things could come to this level,” countered Creek Council member Meghan Rozelie.

“This is about protecting personal liberties. We never supported this mandate to begin with,” said Woodland Park Council member Stephanie Alfiri, who played a lead role in authoring a symbolic ordinance regarding the constitutionality of Governor Jared Polis’ COVID mandates and regulations.

Some health officials in the region are confused over the mixed messages, with masks still regarded as a big defense against the pandemic. But local leaders contend that the Colorado governor’s office will soon end the mask mandate in the near future, and this will give the local region a heads-up in addressing the economic recovery efforts.

“It’s time we make the first move, instead of waiting on the state,” said Stony.

Teller County has been jolted by the year-long epidemic, which hit home about a year ago during St. Patrick’s Day.  Shortly after a celebration occurred last year at the McGinty’s Wood Oven Pub in Divide, featuring the popular McDeviants band, the entire area and state got hit with a complete lockdown the following day. All sports events and theatrical and musical performances across the country were cancelled.

Oddly enough, a follow-up celebration that occurred last Sunday almost  a year later at McGinty’s, with the same band, had everyone dancing in joy and acting like they hadn’t been out in 12 months.  Bono of the U-2 rock band would have been proud of the Irish  enthusiasm.  (We won’t discuss the dancing styles.)

The anti-mask law is also accelerated by the area’s rapid pace at getting local citizens vaccinated. This has been achieved in a much more rapid fashion on a per capita basis than neighboring El Paso County.