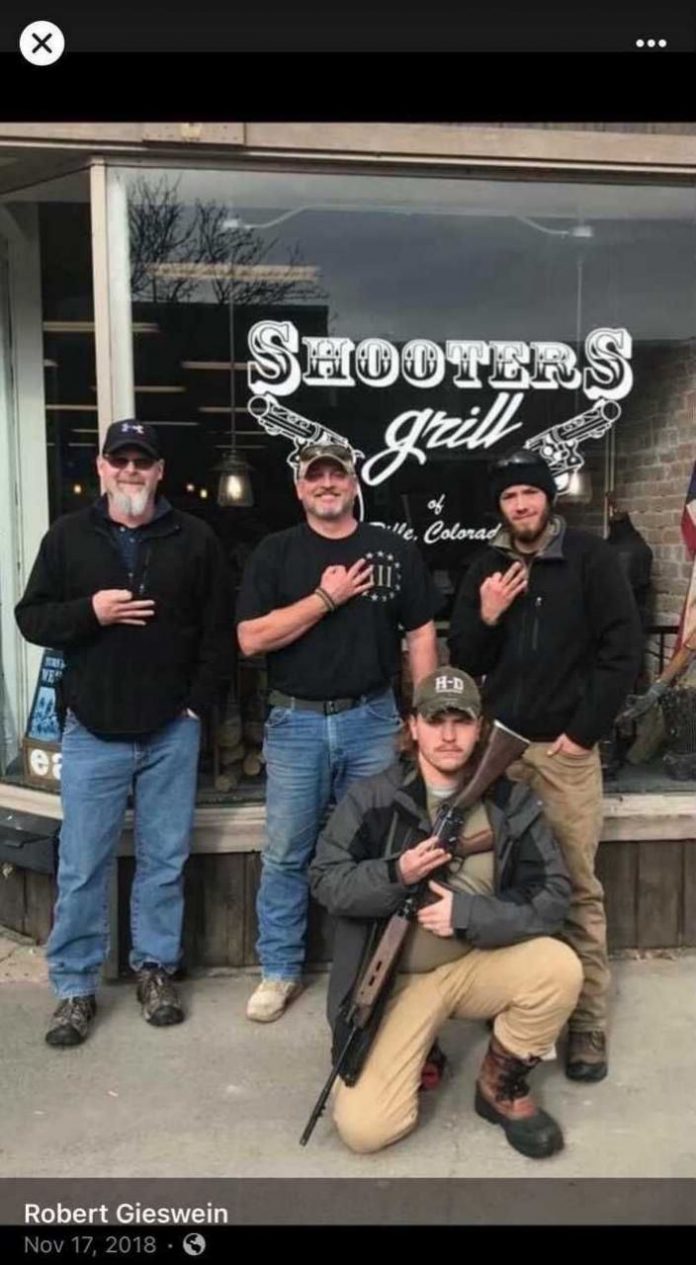 The arrest of former Woodland Park resident Robert Gieswein on federal charges, following the assault on the U.S. Capitol, has captured a surprisingly large amount of national and even international news coverage.

Gieswein, dubbed “Machine Gun Bobby” by some area residents,  has caught the attention of several major  news outlets, especially those from across the pond.

Since the story came out in late January, TMJ News has been contacted by three different news organizations all based in Britain, seeking more information about the 24-year-old man who has called Woodland Park, Cripple Creek, and Florissant his home. They have sought more information about the background of Gieswein, and were intrigued by the way he freely carried around assault weapons in the community, and played a lead role in local Second Amendment protests.

In early February, Cordelia Lynch a reporter with Sky TV UK contacted TMJ News and asked about anyone who knew Gieswein before he was arrested for his role in the Jan. 6 U.S. Capitol riots. Lynch did a lengthy interview with TMJ reporters asking about the gun-toting resident and details about his  “Machine Gun Bobby” nickname.

After seeing a picture of Gieswein at Congresswoman Lauren Boebart’s restaurant in Rifle, the news team did a story about his connection with the newly elected congresswoman. Lynch and Sky News did a segment where they visited Glenwood Springs and Rifle, and asked residents and the Glenwood Springs mayor what they thought about the actions of the controversial congresswoman.

Last week, Gabe Joselow a news producer with NBC News London, also contacted TMJ News in an attempt to learn more about Gieswein. “You (TMJ News) have done some of the most on the ground reporting I have seen on this guy,” Joselow said.

The producer said that NBC News is working on a documentary about several of the people who were arrested on federal charges for crimes related to the Capitol riots. Joselow asked questions about Gieswein’s character and the reaction of locals to his antics.

Phillip Maravilla a television news producer with ITV News based out of London, also reached out to TMJ last week to ask about Gieswein. Maravilla said that ITV News did a lengthy interview with Gieswein, just prior to the U.S. Capitol insurrection.

Maravilla said that ITV News is working on a documentary about Gieswein and they were looking for more background information to add to the interview they have of him. The producer was in the process of  trying to contact any of Gieswein’s friends or family to learn more about his background.

However, nobody who personally knew Gieswein has spoken up recently and come forward. His mother and other family members have also stayed silent thus far. But  during an earlier court hearing, there were many letters of support written for Gieswein, According to these letters, Gieswein was a kind and caring man who wished to become a police officer.

Also, Gieswein was a familiar figure during local pro-gun and constitutional rights’ protests in Woodland Park and Teller County.  During one protest in 2018 that he partially led in Woodland Park, Gieswein was spotted carrying an assault rifle and publicly advocating the rights of teachers and others to properly defend themselves from potential active shooter incidents.

On Jan. 18, the FBI released an arrest warrant for Gieswein after identifying him in several photos and videos taken during the Capitol riots. FBI agents raided the home of Gieswein’s ex-girlfriend the next day but did not find him. Later that same day, Gieswein turned himself into the Teller County Jail.

Gieswein was then transported to a federal holding facility in Denver where he first had a hearing where he was told what charges he was facing. During the first hearing, Gieswein waived his right to have a trial in which prosecutors would have had to prove that Gieswein was the correct person being charged. A judge then ordered that the man remain in custody throughout his trial.

After the first court hearing, a grand jury officially indicted Gieswein on six federal charges including three counts of assaulting police officers, using a dangerous weapon, obstructing an official proceeding, destructing  government property, and entering and remaining in a restricted building with a dangerous weapon.

During his second court date, a judge ordered that Gieswein be sent to Washington, D.C. where he will face trial on the charges. There has been no information regarding Gieswein’s next court date, or when his trial will begin.

The arrest affidavit said that Gieswein operated a paramilitary group in Teller County, called the Woodland Wild Dogs, and that he was related to other militia groups including the Three Percenters and the Oath Keepers. However, during his hearings, Gieswein’s lawyer said that the suspect did not have any ties to any anti-government militia groups.

Teller County Sheriff Jason Mikesell has since told media outlets that he had never heard of the Woodland Wild Dogs and that the group was not under law enforcement’s radar. Mikesell also said that people, such as  Gieswein are rare. Moreover, the sheriff emphasized that they do not represent the strong Teller County community that believes in law enforcement.

“I want people to understand that when they hear he’s from Teller, that he is a lone wolf,” Mikesell said.