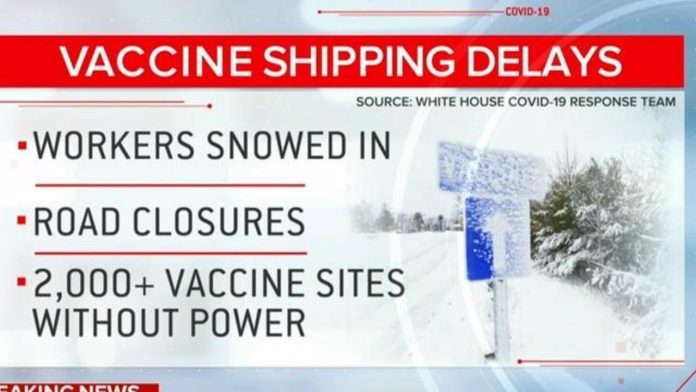 Compared to Texas and Oklahoma, Colorado and the Teller High Country may have been sparred the wrath of Mother Nature.

At least on paper.

The bitter cold that nearly paralyzed parts of the country, didn’t impact Teller as much, even though the mercury dropped to the minus-20 level on Valentine’s Day. This caused a big headache for residential and commercial property owners, with frozen pipes, but no major disasters were reported.

But the trend did freeze COVID-testing, as the  Teller County region didn’t receive any vaccinations for a week.  This fact was announced by Cripple Creek Finance Director Paul Harris, a member of the local coronavirus task force.

This came on the heels of a report, indicting that Teller is  making positive strides in vaccinating  the 70-plus crowd.

Harris hopes that with this temporary shipping delay, attributed to the weather, Teller can receive double its normal allotment of  vaccinations this week.

The continual cold and snowy weather early last week, though, created other problems. The city of Cripple Creek was forced to temporarily suspend its transit service, following an incident that commanded much fodder on social media.

One of its   vehicles, filled with a number of school kids, got stuck due to the inclement weather. This forced the police department to help rescue the stranded passengers. “There were no injuries and no drama.  We are going to support that service,” said Interim City Administrator Ray White.

For safety reasons, he said the city had to temporarily suspend its shuttle service.

And on an upside, he said the area’s movement to Blue will open up more services for the city government.  White said the city will review its travel policies. Residents can now attend city council meetings, on a limited basis. They just have to  call 719-689-2502, no later than noon of the meeting day, to make a reservation. In-person attendance, however, is limited. Priority is given to elected leaders and staff members.