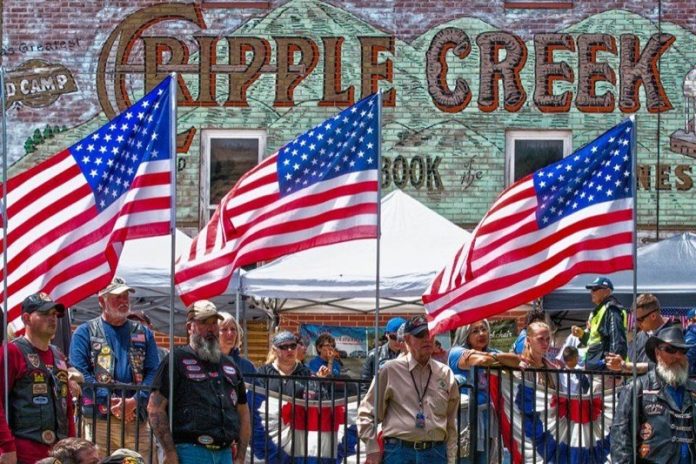 Popular Event and Motorcycle Ride May Move to Woodland Park

Jim Wear, founder of the annual Salute to  American Veterans Rally and motorcycle ride, has not given up on the possibility of resurrecting the popular event that has called Cripple Creek home for nearly three decades.

Even with the official announcement of the axing of one of Cripple Creek’s most well-known local festivals for 2021 and possibly permanently, the debate continues over the future of the Salute Rally and whether it will return to Cripple Creek. Due to the coronavirus pandemic and associated financial woes, the Cripple Creek City Council pulled the funding as a sponsor of any special events for this year, except for its July 4th fireworks celebration.

Rally supporters have accused the city council of not doing enough to publicly support the Salute to American Veterans festival, and have even launched a pro-Rally petition drive.

City leaders, though, say that’s not true and that their decisions are based on the realities of the pandemic. Plus, the city’s budget has precluded Cripple Creek from sponsoring any festivals for 2021.

“The city has not cancelled any events for 2021,” said Meghan Rozell, a Cripple Creek council member, who came under attack at a recent city council  Zoom meeting regarding the Rally scenario. She reiterated that the council also can’t get into the role of “playing favorites,” when it comes to special events. As far as the city’s stand, she noted, “The city is very pro-veterans.  We have three members of the city council who have served in the military.”

Rally leaders contend they want the Salute  to American Veterans Rally to still occur, regardless of funding limitations.

In a recent interview with TMJ News, Wear spoke about his desire to get the ball rolling again with the event. He said, “We’re working with Woodland Park, I think something will happen in Woodland. Something more than last year, but not as much as normal. There’s some conversations happening.”

Wear said losing the sponsorship of Cripple Creek was important, but he was still looking at ways to put the rally on. He mentioned talking to the motorcycle attorneys who have been a major sponsor of all of Wear’s events.

He said, “They have money. We were trying to figure out how to get it done, but then the biggest deciding factor was these complications that some of the locals threw at us.”

He specifically mentioned a group called the Gold Camp Coalition, a nonprofit organization that offered to handle a variety of local events and represent various organizations. He said, “What they kept throwing at us was the real back breaker. It was not the money.”

Wear indicated the Rally’s problems with Cripple Creek dealt with a lot more than funding.

According to Wear, it wasn’t Cripple Creek pulling the money that killed the event. “Cripple Creek’s not supporting it financially, so we’re leaving is not accurate. It’s more these people that seem to have some idea that we’re going to leave (ProPromotions), but the rally’s going to stay and they’re going to be running it.” said Wear.

He said, “They are getting some encouragement from some very uninformed council people. There’s just a lot of backwards stuff going on.” He then took a shot at the Cripple Creek City Council. “Their council makes Woodland Park’s council look really stellar,” said Wear.

A Lack of Council Support

Wear said he thought the council had problems in the early days of the Salute Rally, but now he wishes those days would return, compared to the current attitude of the council.

One issue of contention appears to deal with the desire of Rally organizers for a public support statement, endorsing the event and their organization. This was suggested during a recent council presentation by Annie Durham, a representative of the Veterans Rally Citizens Alliance., which favors ProPromotions continuing the event in Cripple  Creek.

She accused the council of supporting a small group that is trying to vilify ProPromotions, the pro-Rally organization that sponsors the event every year. Durham mentioned earlier conversations she had with Rozell.

Rozell confirmed last week that she did meet with members of the pro-Rally group  last year, following the cancelling of the 2020 event.   However, she didn’t believe the council could publicly support or favor any particular event or group, over another organization. “This is not personal,” said Rozell. “We are in the middle of a pandemic. We can’t pick favorites.”

Rozell said she felt uncomfortable in giving any specific group this level of security, which could be construed as the green light for funding.  Rozell was one of the  main council members who pushed for  no funding for special events in 2021 due to the uncertainties  associated with the COVID-19 pandemic. At the time, the city faced a decision between cutting special event funding or possibly making staff reductions.

In a recent interview, Interim City Administrator Ray White indicated that while the city can’t sponsor any special events, Cripple Creek can take action to provide support services, or even consider issuing a letter of support to facilitate outside funding. He also noted that there are several  organizations now that have gotten involved in the push for veteran events.