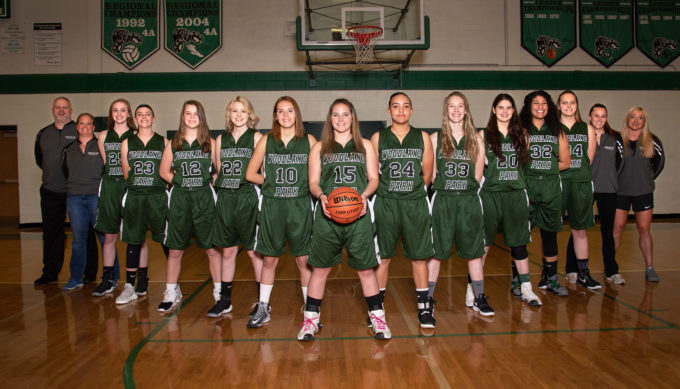 After being postponed for a month, the Lady Panther hoopsters hit the court for their first matches last week.

This year the girls and boys must wear masks while playing and the spectators in the stands will be limited to family members of players only. Unfortunately, the girls lost their first two games, but they have a young team that is still learning the game.

Last Tuesday, the girls played their first non-league game against Mitchell on their home courts. The girls played hard considering the fact that they had limited practice, but they lost the match 46-28.

The Lady Panthers then didn’t have much time to rest or improve before they played another match last Thursday at home against Bennett, where they lost a close one 41-39.

The ladies this year have a shortened schedule due to the pandemic as they only play 14 games. But the girls get little time to rest as all of the games will be played in a month period.

According to the team’s coach Craig Macari, the team is young and they have a lot of improving to do. “Our strengths I have seen on the team are the fact that we don’t give up,” Macari said. “We play hard for 32 minutes.”

Macari said that since the team is really young this year, the main thing they can improve on is “growing up.” “We’re getting there,” Macari said. “They are so young and I am still trying to learn them and figure out what packages work together the best.”

According to Macari, the team only has two seniors and three letter winners from last year. Besides this disadvantage, many of the players are new to the game. The team only sports two other players that played varsity last year.

Another potential setback to the girls’ success this season is the fact that they are playing in a new league. “We are in a totally new conference this year,” Macari said. “We are in the Colorado Springs 3A Metro league, lucky me! I believe Lamar won the state championship three years ago and St. Mary’s are back- to-back state champs, so here we go.”

Macari has coached girls’ high school basketball for the last 18 years. He has been with the Woodland Park program for four years and the head coach for the last two years.

The ladies get thrown back into action this week as they play one non-league match and one league game. On Wednesday, the girls take on Florence on the road and then on Friday they come back home to challenge St. Mary’s during their first league match of the year.

Last week, the boy Panther hoopsters also hit the courts for the first time in 2021. The boys did a little better than their female counterparts as they posted a 1-1 record.

The boys’ team trounced Mitchell at home last Wednesday by a 71-43 margin. But then they played the very next day on their home courts and lost to Bennett by a close 61-50 score.

According to coach John Paul Geniesse, he has been happy with the Panther team progress. “During our first game against Mitchell we played really well,” Geniesse said. “We shot really well and we defended really well. I was really proud of our effort on both sides of the floor. Defensively is where we are really going to pride ourselves. And the kids really responded that night. During the loss to Bennett, they had a good squad and we just couldn’t get the game tied.”

Geniesse said that he also has a young team this year with only four upper classmen.

The coach said that he has noticed the team exhibit some good strengths. “We have really good team speed this year all over the floor,” Geniesse said. “I think we are pretty good shooters this and we can really stretch the floor and force our opponents to have to defend in multiple spots. We have a really hungry team that wants to go out there and play great defense and they want to play with each other. They are excited to be out on the floor.”

However, the coach said the team need to improve in several key areas. “I think consistency from one possession to another is super important,” Geniesse said.

Even though the team is young,  the coach has seen a couple of players shine above the rest. Senior Tyger Ciccarelli and sophomore Sonny Ciccarelli are two players that have already impressed the coach.

Geniesse also said that sophomore Jackson Dornsbach has made some major improvements this year. “All of our kids on our roster are doing something positive right now,” the coach said. “And that’s what we want to continue to focus on. I could literally list all of the kids on our roster and tell you what they are doing well. We are just excited to be on the floor and we hope to develop every day.”

The Panther hoopsters continue their condensed schedule this week as they play their first two league matches. On Wednesday, the boys take on Florence at home, and then they play St. Mary’s on Friday on the road.