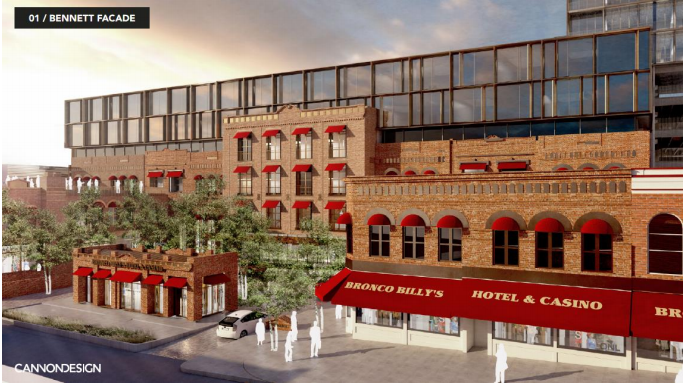 The Bronco Billy’s massive expansion spurt, a project in the works since 2018, is back and nearly ready to move forward.

Only now, the plans are even more elaborate, with a nearly $200 million price tag estimated for the four-star, multi-story hotel addition and parking garage, slated for completion at the end of 2022. In addition, the project now calls for 300 hotel rooms, a 34 percent hike from a previous proposal, and the addition of several more stories in height. 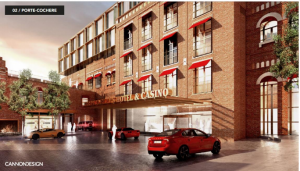 Last week, Full House Resorts, the owner of Bronco Billy’s, received the preliminary okay by the city council for a renewed designation as a project of special merit and variances from the town’s height limits. The final resolution on these matters is scheduled for Feb. 3.

This is a big triumph for Bronco Billy’s, as project proponents can soon initiate the financing for the development that practically appeared dead during the peak of the coronavirus restrictions. Plus, it gives Billy’s the go-ahead to take down several old buildings and obtain a necessary major street and alley vacation to make room for the expansion.

Still, some skepticism remains from the council towards the project. These lingering doubts deal with the lack of tangible progress since their earlier approvals in the summer of 2018. “This is a lot to take in,” said Councilwoman Meghan Rozell, following a lengthy presentation by the Full House Resorts team, at last week’s meeting. “How much of the community is aware of this?” Rozell wondered if more input should occur from local citizens, prior to moving forward.

Mayor Pro Tem Tom Litherland, meanwhile, objected to viewing these new revisions virtually in the 11th hour. But at the same time, he wanted to move forward with the development.

While Billy’s received the approvals it sought, the tally on the height variance only passed by a single vote, with council members Meghan Rozell and Melissa Trenary casting no votes. They mainly cited the lack of progress in the Full House Resorts’ original bid for a hotel addition.

Original plans were approved in the spring/summer of 2018 during packed city council meetings with lively debate over the development direction the town wanted to take. Following considerable discussion, the council gave Full House the okay for what became undoubtedly  the most aggressive hotel additional ever proposed and one that clashed considerable with the city’s stern historic preservation rules.  But work never really commenced on either the parking garage or the new hotel, and a result, their previous approval resolutions, expired. 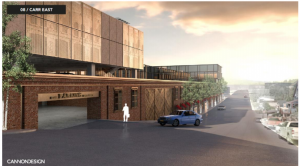 During last week’s hearing, Dan Lee, the chief executive officer of Full House Resorts, conceded that delays have occurred, which he attributed to the coronavirus epidemic. He said all of the company’s five casinos across the country, including Bronco Billy’s, were forced to shut down at the same time.

But now, he said the stakes have definitely changed, with casino business on the rise.   In addition, he cited a very favorable bond market and the change in laws, with the passage of Amendment 77. This amendment calls for unlimited wagers on single bets and a big lineup of new Las Vegas-style games.

“We can build it all at once,” said Lee, in mentioning probably the biggest adjustment from the time of their original approval.  Initially, Billy’s wanted to do the project in stages.

But under their new plans, both the parking garage and new hotel construction will occur at the same time.  The other big change visually is that the project will feature the addition of 101 hotel rooms from the original proposal, with the new lodging units located above the parking garage. 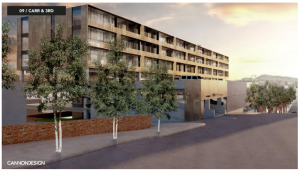 The new hotel will encompass six stories, 300 rooms, and a spree of amenities.

At last week’s hearing, the Full House head executive continued to stress the theme that their project would help the town become more of a destination area  He said they are striving to maintain the historic flavor of Cripple Creek, while offering needed extra amenities. “We are trying to adhere to the historic nature of Cripple Creek,” said Lee. 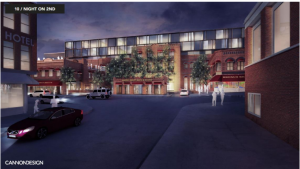 More importantly, he said their team is ready to move forward and assured the city it has restored their original $3 million-plus performance bond. “We are teed up to go to the bond market.”

The project development team for Full House Resorts backed up Lee’s comments with some impressive data.  They reminded the council the project would provide “a significant civic benefit.”

No one spoke in opposition to the request.  That’s a far cry from several years ago, as the project got delayed by a lawsuit, filed by several competing casinos, which was denied in court.

The project plans must survive one final council vote, slated for Feb. 3. Pending any last-minute hurdles, this should signal the green light for a proposed  development that has commanded much interest locally and across the state for several years.

The original expansion plans of Bronco Billy’s spearheaded a race for new lodging amenities.  Besides Billy’s, a new hotel bid by the Wildwood casino, is nearly completed.  A new 100-plus-room hotel, adjacent to the casino, should open sometime this year.