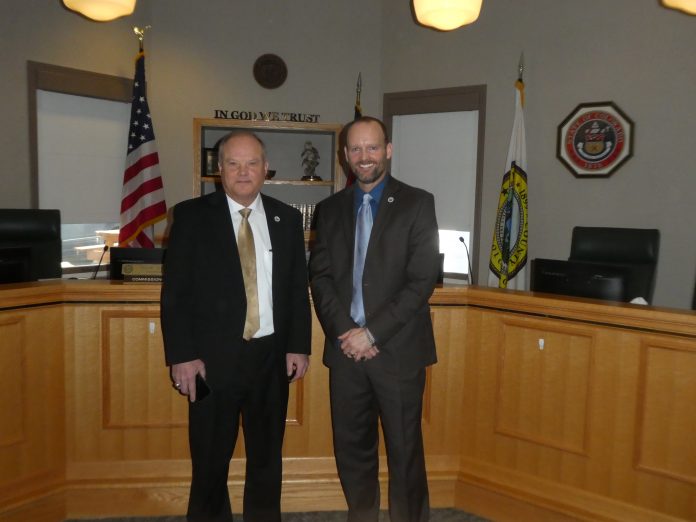 In a ceremony capped by many pats on the back and favorable comments towards outgoing leaders, veteran commissioners Norm Steen and Marc Dettenrieder bid farewell from their familiar posts after eight years of service.

However, none of the outgoing commissioners will be leaving government activity altogether. Steen was recently appointed as the district director for U.S. Congressman Doug Lamborn, who represents Colorado’s 5th congressional district, encompassing five counties including Teller and El Paso.  As a result, Steen said he will have strong legislative connections with Teller residents, but more on a federal level. He also has started a private government consulting company that assists companies and individuals dealing with state and local governments.

And Dettenrieder has taken a top position as the economic development manager of Elbert County. Consequently, he will have strong ties with the state government.

But at last week’s ceremony, both departing commissioners touted their service in Teller County, and maintained that they are leaving the county in good hands. “Public service is a matter of the heart,” said Steen, when addressing the large audience that attended the changing of the guard ceremony. He emphasized the strong team work that occurred during his stint as commissioner. “We are a team of teams….I want to thank the people of Teller County.”

Besides his roles as a leader on several key committees, such as the Pikes Peak Area Council of Governments, Steen didn’t hide his strong religious views.  “I value our spiritual heritage,” said Steen. “Praying for Teller County every day has been my privilege.”

Dettenrieder, meanwhile, mentioned the high points of their administration.  He cited the High Chateau fire several years ago in the Four Mile area as a real eye-opener for himself, in learning the amazing response team Teller had in place in dealing with potentially devastating incidents like this. “It shows how prepared we are,” said the commissioner, who was impressed also with how top leaders weren’t afraid to get their hands dirty in taking on a crisis head-on and in adopting a hands-on approach.

Dettenrieder also cited the county’s prime financial position, a track record achieved through lean and mean savings. “The county will have no debt in 2022,” boasted Dettenrieder. Other improvements he  mentioned dealt with a vastly improved sheriff’s department and an increased level of cooperation between the sheriff’s office and the commissioners.

The departing commissioner also cited the county’s response to the coronavirus epidemic as a great final tribute to their track record. He admitted they faced a crisis scenario in grappling with a virtual lockdown situation on several occasions. “We had one of the most aggressive proposals,” said Dettenrieder, in describing their efforts to reopen the county, following the initial stay-at-home-order.

He said it took much cooperation among business, civic and elected leaders to reopen Teller and to keep the county from shutting down again. “We were all able to hang on,” said Dettenrieder, in describing a scenario in which the state was ready to reclassify Teller as  a Level Red area in December, meaning all casinos would shut down again, indoor dining would cease and businesses would get slapped with huge restrictions. “Those were some tough times. I have empathy for those who suffered,” said Dettenrieder. In closing, he noted, “Teller County is always going to be in my heart.”

No Shortage of Compliments

Scores of elected leaders who attended the ceremony complimented the departing commissioners.

Commissioner Erik Stone, who now represents District 3, said citizens and workers of Teller County owe the departing commissioners a huge thank you. He noted that without their continual and repeated pleas  to the state, thousands of jobs would have been lost, just before Christmas time 2020. “We were orange (the  at-risk color rating of the state) in a sea of red. They bought us time. I want to applaud them for their work (in preventing another lockdown mode).”

He emphasized that Steen and Dettenrieder really played a key behind-the-scenes effort in keeping the county open for business. And if it wasn’t for their dedication, Stone predicted that Teller would have lost thousands of jobs and got clobbered financially.

Teller County Clerk and Recorder Krystal Brown thanked the two departing leaders for giving her a chance in running the agency.  She was initially appointed to the clerk position during their administration. Brown referred to Steen as a “Gentle Giant,” and touted the amazing public speaking abilities of Dettenrieder. “You can fire up a room,” she added

In the most unique speech of the day, Sheriff Jason Mikesell touted the two as nothing less than local heroes. He also said this type of transformation of power is what the country needs.

New commissioners Stone and Dan Williams were sworn into power in a non-eventful manner and soon got down to the business at hand.  As expected, veteran commissioner Bob Campbell received the nod as  board chairman, while Williams, who served as Teller’s head planned for a number of years, was appointed as vice-chairman. In other action, Don Angell, who heads the county’s office of emergency management, was awarded the county’s annual leadership award for his role in leading the response effort to the coronavirus epidemic.