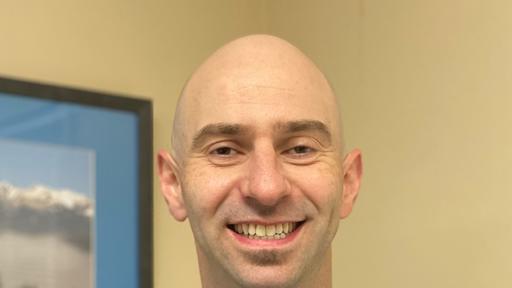 New Woodland Park Acting  City Manager Michael Lawson faced the spotlight of TMJ News last week during a detailed interview, as the  new head boss outlined his stand on key community issues and his adjustment to the new position

Lawson was hired as the WP assistant manager shortly before former City Manager Darrin Tangeman left his post for a job in Truro, Massachusetts last December.  Lawson’s first day on the job was October 19. But after Tangeman’s departure, Lawson was appointed as “acting city manager.”

According to a press release, “Lawson comes to the city with experience and a proven track record of success in local government. Prior to accepting this position, Michael (Lawson) worked for the city of San Diego as a Management Analyst, and then with the city of Aurora for more than 12 years in various roles: Manager of City-Wide Special Projects, Interim Community Development Manager, Interim City Clerk, Finance and Budget Program Manager and Finance and Budget Program Administrator.”

His appointment marked the first time the city had a permanent assistant city manager as this position was often held in the past by the city clerk, or by other city officials.

Asked what issues he believes need top attention this year, Lawson responded, “We have a number of key areas we’ll be focusing on as staff in this new year. It’s hard to put them in a priority order, as each of them impact different parts of our community and our organization in different ways. I will say that as I’ve shared with our council, staff, and several members of our community, my greatest ambition for the city of Woodland Park is to build trust between the city and our community. For me personally, trust is built through constant communication and openness. I believe the city government does great work already and delivers strong value for money to taxpayers.”

The acting city manager also cited the importance of getting the citizens more involved in city projects and in increasing communication efforts.  “I think there is more we can do to come alongside the community and show how we’re serving our residents and businesses, said Lawson.

And as part of this process, he hopes to increase communications online. “We can do things like better involving the community in important projects and making city processes easier-to-understand,” said the acting city manager. “We are making strides on that front through bringing online, “What’s Up Woodland Park”, our new community engagement platform (whatsupwoodlandpark.com). Our hope is that we can hear from all corners of our community about the things that matter most to Woodland Park. The city government belongs to the residents and we want to ensure the city is transparent and responsive.”

Lawson also discussed the upcoming comprehensive plan and plans to better market the city. The comp plan, often referred to as the master plan, is done every 10  years and often serves as a planning blueprint for the next decade. Lawson believes this effort is important and can enhance communication efforts and help get the word out about local businesses.

“Other key priorities for the city in 2021 include creating a new comprehensive plan (another great way for residents to get involved!), marketing and promoting the community and its businesses, building out long-range financial and capital improvement plans; along with making changes to the budget document, focusing on enhancing the quality of customer service we provide and investing in our most important resource, our employees. We will also continue to strive to ensure everything we do is viewed through the lenses of both effective fiscal stewardship and compassion toward those we serve.”

Not getting the nod as permanent city manager

Despite Lawson’s impressive resume and his bold vision, the city council fell short of giving him the full-fledged city manager status right away. It is unclear at this point if he will be appointed to that position, or if the city will conduct another search for a full-time city boss.

When asked about not getting the nod for the  permanent, city boss position, Lawson remained somewhat low-key, emphasizing the attributes of  his current position. “I’m enjoying the opportunity to serve in the acting role,” said Lawson. “The support from the council and the staff have been wonderful. I’m grateful to serve in the role during the relative calm of the holidays and the start of a new year. The time is giving me time to assess and get a better feel for the community and the ins and outs of both the assistant city manager role and acting city manager role. At this point, I’m just focused on getting up-to-speed and helping the council and staff get into the groove of a new—and hopefully less crazy—year.”

From the communications we have had with Lawson, he appears to be the kind of government administrator who sees opportunities, even in times of challenging circumstances.

As for Lawson’s first impressions of the city he said, “I’ve enjoyed my time here so far. The city has faced several challenges, even in just the short time I’ve been here. But with those challenges come many opportunities as well—and I’m excited to see how our community responds. Our city staff is phenomenal and has great passion for those they serve. The council has been welcoming and helpful as I’ve come on board as well. Those I’ve met in the community have been very kind to my family and me as well. We’re glad to be a part of the Woodland Park community and make it our new home. We live here in the city and have just started to get plugged in—unfortunately, it’s been hard to do with COVID! Woodland Park has much to be proud of and we’re excited to be here.”

The 2021 budget was a long and sometimes contentious ordeal. It was barely approved, with a few council members voting no and complaining about how the process was conducted. In fact, it passed by a single tally.

Lawson’s take on the budget fight, though, is interesting. He stressed the challenges facing the city and council and the fact that the leaders succeeded in approving a lean fiscal budget for next year, without cutting services.

“I’m pleased the staff and council found a way to respectively, propose and approve a balanced budget in spite of facing a number of unprecedented challenges,” said Lawson. “Both the council and staff had to make some difficult decisions while navigating a world-changing pandemic, having several council members going through a city budget process for the first time, and even adding a new council member during the process. We did preserve service levels for the core services our residents rely on each day. We are considering ways to make the budget and budget process more accessible and transparent to residents in the coming year as well.”