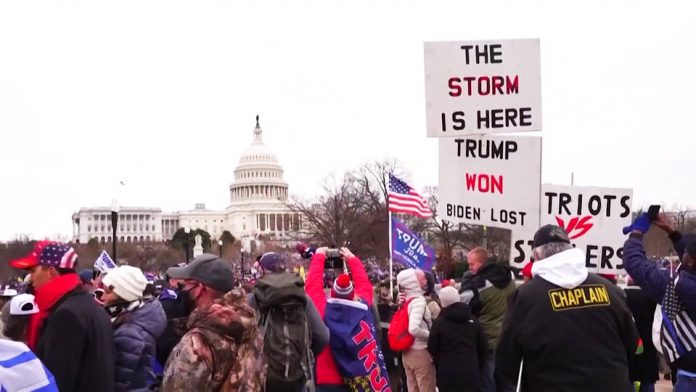 In the wake of the unprecedented attack on the U.S. Capitol on Jan. 6, TMJ News was bombarded with response comments from local and area civic leaders, along with national representatives and well-known voices. Many of these consisted of official statements, emails and web posts. We appreciate everyone’s interest in this issue during a very tumultuous period in our nation’s history.  Here are a few highlights:

Unfortunately, the scenes  in Washington last week conveyed images from the great historical novel by Philip Roth, “Plot Against America,” which was turned into a popular HBO ministries series in 2020.  That story represented a purely haunting fictional tale of what may have happened prior to World War II, if Charles Lindbergh ( an early Hitler sympathizer, according to some reports) would have run for president and beaten FDR in 1940. Yes, the story is farfetched, at least I thought so when I read the book several years ago. Thought it was a great book, but would never resemble anything happening in America. But the anarchy Roth depicted when democracy was shattered, and showcased somewhat in the HBO series, really hit home with the Capitol invasion.

What happened to the good old days when Dems and Republicans would go out drinking together, (like Ronald Reagan and Tip O’Neill did on many occasions) and even exchange stories with crazy journalists like Hunter S. Thompson, and then have good-hearted debates the next day.  Some of those nostalgic days were featured in a recent CNN film,  “Jimmy Carter, the Rock and Roll President.” Maybe, our leaders now need to listen to more rock and roll, go on a hike or plainly chill out; or accept each other’s view.  Regardless of politics, this partisan divide is not achieving anything.

Whatever happened to the ideals of Common Sense?

It was a setup.  President Donald Trump really made a mistake and miscalculation in believing nothing was going to happen  He assumed the Capitol Police would defend the Capitol.  It was an ill-advised move on his part.

But I think the decision to impeach the president is stupid. Nothing is going to come of this action. That is just a symbolic gesture by the Democrats. I don’t think one bad incident should negate four years of a good economy.  Trump did a good job, whether you like him or not, and I would vote for him again. Personally, he is ruthless. I don’t think anyone really likes him (personally). But you don’t make billions of dollars  by being a nice guy.

It is unprecedented and very sad.

It just shows the strong amount of anger and distrust on so many different levels. I used to spend some time in Washington D.C. in my previous work with the federal government. I am just glad I am in Cripple Creek now.

Today (Jan. 6), the violence and disdain we witnessed inside our U.S. Capitol in Washington D.C. was inexcusable.

We as Conservative Republicans should not conduct ourselves in that manner when demonstrating in a peaceful protest. Every American has the right and freedom to protest, as many had the best intentions, but there was a small percentage that led a disgraceful attack and stormed in.

Those actions led to a life that was lost today. We have numerous problems as a country, protecting our liberty and freedom, but what occurred today is not the solution. Please join us in condemning the senseless violence and disrespect that took place. We can never normalize political violence, but address this with law and order.

We are certainly disappointed with the results from the Georgia runoff election (in which the two Republican candidates lost, meaning the U.S. Senate will now fall into a Democratic majority), but we must keep our eyes on the goal.

The founding fathers set up as best of a government as has been conceived, not perfect, full of flaws; but better then what was known or has been known. This was largely influenced by the people already living in “America” and their systems of society that had been in place for far longer than we have been a country.

The checks and balances the founders sought to put in place do the best to limit government control and insure PERSONAL freedom. This system isn’t perfect as they well knew. Today we are constantly exposed to opinions, mass media, conspiracy theories, and propaganda from many sources, including our own government. The founders understood that change takes time and scientific reason to take hold. AS WELL AS a belief in something greater than ourselves and that a certain natural law governs all peoples. My hope is that Today showed how divided we are, how influenced we are from outside sources, and how we need to come together and realize that difference is what makes our country great. I don’t need to agree with you but at the same time you need to respect my ideas and beliefs.

This is a concept that is being removed from America because you can’t hurt anyone’s feelings anymore. I could care less if you are gay, white, Asian, black, poor, rich, Arabic,  Irish, an immigrant (legal or not), short, tall, blue eyed, or transgender. The point is don’t force your opinions or ideals on me and I won’t treat you any different than the next human.

The rhetoric being pushed now is that you have to take a side and that there are only two sides. There are over 320 million people in this great country and no one should have the exact same beliefs, and that’s okay. We need to stop worrying about what everyone else is doing, thinking, promoting, and FOCUS on what do I actually believe? What are your values? It is ok to disagree! After today’s events I support the police who tried to keep a peace, I support the congressmen (yeah that’s what they are called regardless of gender), I support the protesters, the media, and I support the president of the United States of America, Donald Trump and the next President, Joseph Biden.

AMERICA come together! Continue to work to make this the greatest county in the history of the world. We have a long way to go but a hundred years from now maybe we will be closer to a better society then in 1776.

United we stand, divided we fall.

I condemn violence. Instead of shooting people and tearing down buildings there is a right way to do this. In Teller County, we value the respect of the law and we also know what’s right. We value what is right and we speak openly about it. That’s one of the things that we in Teller County respect and encourage. We value our freedoms and taking steps to protect them but that should not come in the form of violence. The Founding Fathers said that we have a republic if we can keep it.

The last stanza of our national anthem is a question. “Does the flag still wave o’er the land of the free and the home of the brave?” There is a question mark, it’s not a proclamation. Americans always have to keep working and trying to be vigilant and aware to protect their liberties.

Norm Steen has served as a Teller County commissioner for eight years and also was chairman of the Pikes Peak Area Council of Governments and served on several key transportation advisory boards.

On Sunday (Jan.  I was sworn in to represent Colorado in the United State Senate. Four days later, I was hunkering in a secure location in the U.S. Capitol’s basement, texting my wife, Robin, that I was OK and to make sure she was safe.

It’s now been about 24 hours since the Capitol was ransacked by a violent mob of domestic terrorists driven by the president’s own false notion that our free and fair elections — the very cornerstone of our republic — were fraudulent.

It would be easy to point to Wednesday’s events as an unpredictable anomaly, but the truth is that they were simply the culmination of the work of a president who has spent the past four years stoking dangerous divisions and appealing to the most vile, most toxic elements of human nature.

As Nelson Mandela famously said, “No one is born hating another person. …  People must learn to hate.” And President Trump has been a masterful teacher. President Trump is clearly unfit for office. I supported impeachment a year ago, and the American people voted to remove him in November. That’s finally happening on Jan. 20, when President-elect Joe Biden will take over and begin to rebuild our nation. President Trump and the thugs who attempted a violent coup can’t override the will of the people.

Laura (Bush) and I are watching the scenes of mayhem unfolding at the seat of our Nation’s government in disbelief and dismay. It is a sickening and heartbreaking sight.

This is how election results are disputed in a banana republic — not our democratic republic. Our country is more important than the politics of the moment.”

The violent assault on the Capitol and the disruption of the constitutionally mandated certification of the Electoral College votes were done by people who believe in misinformation of voter fraud that has been perpetuated by political leaders.

(George W. Bush served as president from 2001 to 2009. But since stepping down, he has mostly maintained a low-profile status.)