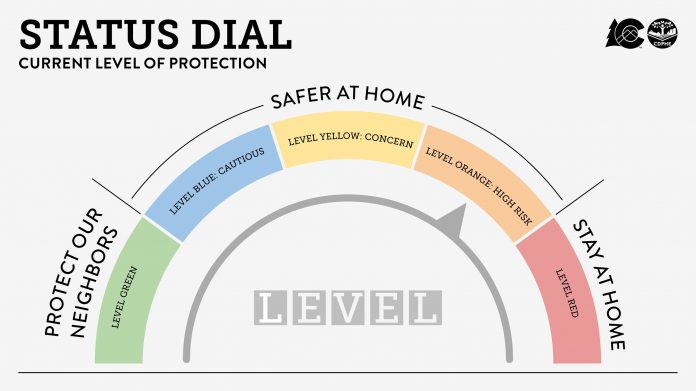 No, it’s not quite time to beat the drums and uncork the champagne bottles and invade area establishments,  but Teller County remains safe from further coronavirus restrictions and local business shutdowns.  At least for now and the immediate future.

That’s great news for local restaurants and casinos, which were always forced to operate on a week-by-week basis, with the threat of a closed sign hovering over their entrance.

The recent statistics have shown that the number of new confirmed cases of COVID-19 have been decreasing and are headed in the right direction.

Last Wednesday, the Teller County commissioners had a conference with the Colorado Department of Public Health and Environment (CDPHE) regarding whether the county would move to the extremely critical Level Red on the state’s dial or continue its Orange-land designation.

“We had a phone call with the state on Wednesday around noon and they agreed with the stats the way that we see them that our numbers our improving,” County Administrator Sheryl Decker said. “We are solidly and legitimately in the orange now and we don’t need to touch base with them unless we start to see things slide the other way. We need to keep doing what we are doing.”

According to Decker, the county is currently considering signing up for the state’s five-star program, but since the county is still at Level Orange, they have not taken steps to be a part of the program. Under the new five-star agreement certain businesses can operate at one  level of fewer restrictions than what the county operates under, if they implement and prove that certain safety procedures are taken. But on the downside, the five-star program is filled with many rules and procedures.

Decker said that since the county is still at Level Orange, they are going to have a stakeholder meeting to see if local businesses want to sign up for the program. The meeting will see if the businesses think it is worth signing up for the program that would allow certain restaurants, for example, to operate at 50 percent capacity levels instead of 25 percent.

The county is also currently working on providing the anti-COVID vaccine to first responders, hospital workers and people over 70, and those living in assisted living facilities. According to Decker, the county’s health department has received  shipments of 100 vaccinations and they are working on administering the second round of 100. All of the vaccinations that the county health department received went to the county’s first responders.

Decker also said that other organizations, such as Walgreens and UCHealth were working towards getting vaccinations out to the other people covered under the state’s phase one plan. “When we get the vaccinations, we are still trying to make sure we get the majority of first responders done,” Decker said. “I know UCHealth is helping out with seniors because that is a big push at their level. Walgreens is taking care of our long-term care people. There are a lot of moving parts to this.”

According to information put out by the state, Teller County had received 158 vaccinations, but that number is not thought to be accurate. Decker said that officials believe there have been more vaccinations administered than what the state has reported.

“We know for a fact that that number is not accurate,” said Decker.