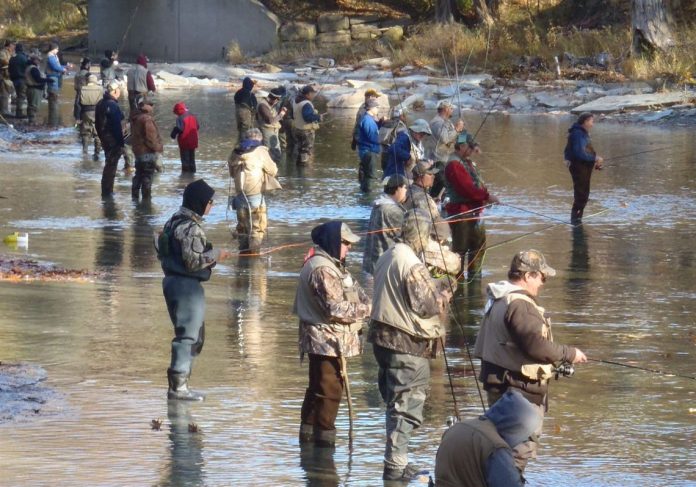 With the usual indoor entertainment venues being closed or shunned for fear of contacting the COVID-19 epidemic, thousands of Americans looked to the outdoors for recreation and entertainment in 2020.

Already, officials reported a record number of visitors at Colorado state parks. This trend is expected to continue for 2021.

Every outdoor recreational sport has seen a dramatic increase in users since the pandemic began, and one of those activities is fly fishing.

In a sense, fly fishing is a natural byproduct for social distancing. Proper fly-fishing etiquette dictates that each angler allows other anglers room to pursue the art of fly fishing. Problems arise, however, when thousands more anglers are added to limited space on rivers, lakes, and streams.

On a typical day on the North Platte River at Deckers, Elevenmile Canyon, Cheesman Canyon, and the Dream Stream, you’ll find scores of anglers trying their luck. With the addition of COVID-induced fishermen, the problem of finding a spot to fish unmolested by the crowds has grown.

While the addition of more anglers on the water may be an inconvenience to the fishermen themselves, it has been a boom time for fly shops, fishing guides, online fly-fishing shops, and the fly-fishing industry as a whole. From the industry’s new angler standpoints, this outbreak is being compared to (and exceeding) the flood of new entrants into the pastime after “A River Runs Through It” premiered in 1992. (This was a popular movie directed by Robert Redford, highlighting fly-fishing scenes in Montana.)

The current surge of increase in the sport has given the fly industry hope after many businesses and retailers have felt the impact of the COVID outbreak, starting in the winter of 2020.  More and more states are reporting record-breaking license sales and some retailers have seen increased business.  For instance, according to Angling Trade, “David Leinweber of Angler’s Covey said he spent last April wondering if he’d even have a business in the summer, but when he opened in May he sold 1,000 flies in a single day.”

Leinweber said he worried his business and his staff would suffer from a drop in sales during the pandemic. However, the store has struggled to keep up with booming demand.

“I’ve been scrambling the entire month of June just to get product,” Leinweber said. “We’re almost caught up now. But it’s been really an unbelievable, crazy phenomenon that you go from April, where I think I might lose my business, to May.”

Tim West, owner of Breckenridge Outfitters in Breckenridge, Colorado said, has noticed a surge in people booking guided fishing tours, “Our guided trips are insanely busy,” he says. “We’ve seen a lot of first-timers coming in because they couldn’t travel or do other things like backcountry skiing, and that snowballed into guided trips once we were allowed.”

Families are getting on the water more than ever before also. Many families are quarantined together, so they feel comfortable taking fly-fishing lessons together, too. According to West, Breckenridge Outfitters is seeing an increase in parents and kids wanting to get on the water. “Trout don’t live in ugly places,” he said. “So why not enjoy the beautiful scenery as a family?”

Colorado Parks and Wildlife has issued nearly 90,000 more annual fishing licenses in 2020, compared to the same period in 2019. “That uptick is largely the result of people feeling cooped up from stay-at-home restrictions and other public health orders,” CPW spokesman Travis Duncan said.

In addition to annual licenses, CPW sells several other fishing licenses, including one-day passes and stamps that let you fish with more than one rod. In the first half of 2020, nearly 710,000 various fishing permits were sold.  There is no reason to expect a decline in this rate for 2021.

Lastly, from what I heard from fishy friends, the major hot spots near Woodland Park, The Dream Stream, Deckers, Elevenmile Canyon, and Cheesman Canyon were packed with fishermen last year. These areas should experience a boom again in 2021, once the season kicks into high gear.  Currently, ice fishing is the main activity area anglers are enjoying. But this sport is often contingent on the Colorado cyclical winter weather conditions