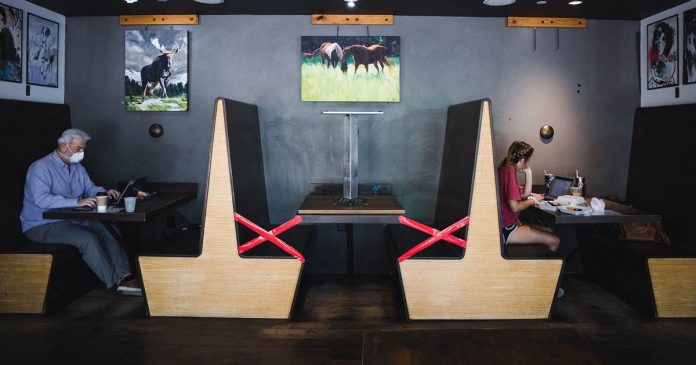 Teller County May Be Off the Coronavirus Scrutiny Hook, Temporarily

We are back in action, thank you Governor Polis.

That may be the response of local restaurant and bar owners and for many retail shop operators in Green Mountain Falls, Cascade, Manitou Springs and the westside of Colorado Springs.

In a surprise move, Colorado Governor Jared Polis last week requested a big change in the color-coded COVID-19 alert system, moving 33 counties now in the critical Redland to at-risk Level Orange. He cited the lack of hospitalization and state COVID-19 stats that have declined for nearly two weeks.

If everything proceeds according to his plans, the stage could be set for indoor restaurant dining to return to the entire Pikes Peak region, including El Paso County, early this week.   For weeks, eateries in El Paso, such as those in Green Mountain Falls, have  been forced to do take-out or opt for outdoor sections, which are difficult during the winter months.

In an interview last week, the governor indicated a problem with inconsistencies and  a patchwork network, leading residents and visitors to travel to Orange locales to partake in indoor dining. This has definitely been a trend in Teller County, with some eateries experiencing a big spike over the holidays. Locals say they would much rather partake in indoor dining and bar activity, rather than opt for a grab and go option, even if it involves a short drive to a neighboring area.

“We want to move as a unit,” said Polis, who expressed concerns regarding a lack of “regional cohesion.” “We are comfortable with pushing everyone in that direction,” he added.

This announcement comes in the wake of much criticism the governor received for a lack of communication with city leaders in Colorado.

Still, Level Orange restrictions aren’t a cake walk, with 25 percent capacity levels inside eateries and big limits for gatherings. It also will increase the mandatory mask and social distancing rules.  And if most businesses are at a Level Orange designation across the state, this could mean more scrutiny by health officials.

On the upside, the governor’s decision could take the pressure off Teller County, with the state’s Department of Public Health and Environment (CDPHE) looking over their shoulder in anticipation of authorities pulling the red button.  Teller officials had been conducting weekly meeting with CDPHE.  And for a short period, Teller officials were predicting that they would get slapped with a red designation, as their case load was heading in that direction in early December. This could have meant that  the casinos would have to be shut down again, which could spell economic disaster for the Cripple Creek/Victor area.

The saving grace for the county was that its hospitalization numbers were quite low and its positivity rates (for those being tested)  weren’t a problem.

The county is scheduled to meet again with CDPHE on Jan. 6. Regardless, county officials must  be expressing some relief.  If they did get slapped with a red designation, the county would have mulled a five-star program, allowing select businesses to operate at a lesser level of restrictions.  But this program comes with many rules, expenses and bureaucracy.

Despite the hassles involved with implementing the five-star program, the El Paso County commissioners agreed last week to take this move last week, regardless of the governor’s pending action.

As a result, restaurants in El Paso that qualify for the program, may obtain even more leeway as far as capacity levels.  If the county gets a Level  Orange, designation, then five-star applicants could obtain even more relaxed guidelines.

However, many of these details still have to  be worked out.

But for the first time in weeks, local businesses received a dose of positive news.  And to further add to this trend, Manitou Springs, elected leaders recently announced a grant program to help ailing restaurants. Manitou eateries and bars have been seriously impacted by the Level Red rating.