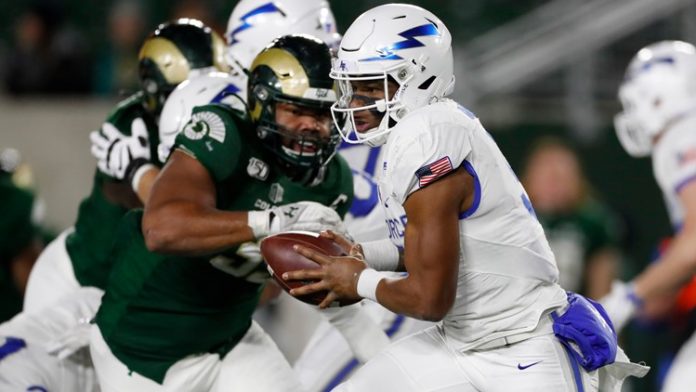 So far for college football fans the season has been hit or miss with most football buffs not knowing when or if their favorite team will play each week.

When their games haven’t been canceled, teams in Colorado have shown up and played some decent games. But(with the exception of CU whose success is still too early to tell) none of the teams are really looking stellar.

Unfortunately, last week the Colorado State Rams game against UNLV was canceled due to the increase of cases of COVID-19 in the Las Vegas community even though the football team had taken precautions and not seen an issue with the disease. For a second, there were speculations that the Rams would try to schedule another game last week and the first idea was to pair them up against Wyoming for a rematch that would not count as a conference game.

Another idea that was brought up was to have the Rams take on the Colorado Buffaloes since they are not a conference team. Plus, they did not have a chance to play their rival team like they have every year in the past. Ram team officials said that they would be open to playing Colorado, but they were unable to make it happen at least for now due to a rule set by the Buffs’ Pac 12 conference, saying that the teams could not play any out of conference games.

The Rams so far this year look pretty mediocre, as they have the last couple of years, with their 1-2 record. They did however win a big game against their rival the Wyoming Cowboys, which enabled them to take back the Border Wars trophy.

This week the Rams have a big game to look forward to as they play another in-state rival, the Air Force Falcons on Thanksgiving Day. This year, the teams actually looked pretty evenly matched, as they are tied in the Mountain West with 1-2 records after each team has had some games canceled.

Even though I think this game will be a good one to sit down and watch during the holiday, my thoughts are that the Falcons are going to come out on top. My main reason for saying this is that they have proven to play well in just about every game, Andin three out of four of their matches this year, they have scored 28 points or more.

A real positive for the Falcons offense is that they know how to get yardage on the ground. During the year so far, they have racked up over 1,300 rushing yards versus 268 passing yards. Therefore, I think that they will be able to break through the Rams defense with their stellar running game led by Running Back Brad Roberts and easily be able to score once their rushing team drives them down the field.

The Rams, on the other hand, are more comfortable when passing and keeping the ball in the air. And, they have been known to be explosive with big plays and the ability to put points on the board with their average of one passing touchdown and one rushing touchdown per game.

However, I do think that the Falcons defense will be able to put a damper on Ram Quarterback Patrick O’Brien and his favorite target Wide Receiver A’Jon Vivens. The Air Force defense has proven to be effective all across the field, especially after their 28-0 shutout against New Mexico last Friday.

I definitely believe that the Falcons secondary could prove to be too much for O’Brien, who only has a 67.3 quarterback rating. The Falcons defense this year has picked the ball off three times in their four games, so if the Rams stay in the air the whole game, there is a chance the Falcons secondary team will step in and take the ball away possibly more than once.

Overall, I believe that the Falcons will run all over the Rams defense and that the Colorado State pass-driven offense will not be able to score big numbers against the Air Force defense. I also think that the Falcons have good momentum after shutting out the Lobos last week, and that they will bring it with them to prevail on Thanksgiving Day.