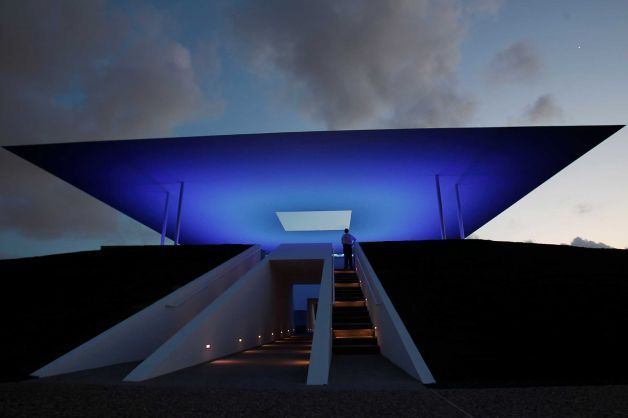 With only a handful of questions and concerns, Green Mountain Falls elected leaders have signaled the green light for the first step in bringing a major, multi-million-dollar, year-round, art and tourist attraction that could change the face of the community, to GMF.

The trustees last week gave the preliminary okay for a significant 30-plus-acre annexation bid by the Historic  Green Mountain Falls Foundation and Chis Keesee. A public hearing has been set for Jan. 5.

The annexation is the first step in an approval process that could change GMF from a sleepy town in the winter to a year-round hub attracting art, star and nature buffs from around the country and world.

“We are in motion,” said  Mayor Jane Newberry, following last week’s hearing. The mayor and the trustees expressed much optimism about the forthcoming project, expected to make an early debut this summer.

With the annexation action of the Red Devil Mountain area, in the northeast corner of GMF, the stage is set for the preparation for a year-round observatory-like attraction, featuring the newest skyspace installation of the famous Arizona artist, James Turrell.

These works, according to Turrell, are “about your seeing. There is a rich tradition in painting of work about light, but it is not light, it is the record of seeing. My material is light, and it is responsive to your seeing.”

Turrell’s most famous work involves the “transformation of a crater in Arizona into a naked-eye observatory. “ Many of his works focus on light installations that mesh technology with nature.  The result culminates with a rare, unobstructed view of the sky and the stars.

His newest work, slated for completion in Green  Mountain Falls by possibly this summer, will represent the first skyspace venture in Colorado.  There are more than 80 skyspace installations around the world.

During last week’s meeting, Jesse Stroope, a representative of the Historic Green Mountain Falls Foundation, cited the project as a potential boon for the community and for local businesses and area tourism. He earlier made a presentation before the board of the Pikes Peak Chamber of Commerce, and received stellar reviews.

“People travel all over the world and country to view these installations,” said Stroope, 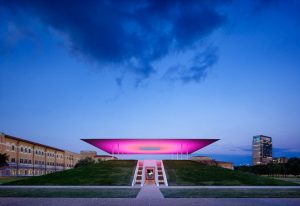 who said it could bring a different kind of visitor to the area. “It blends well with the environment.”

He cited the skyspace installation as a “naked eye chamber open to the sky,” and one that provides a “complete awareness of nature.” “It is a great place to meditate, added Stroope.

The actual nearly 1,000-square-foot installation also will showcase sunrise and sunset shows, according to project proponents.

Stroope in his comments drew some comparisons with a skyspace project done in Crystal Bridges, Arkansas.

As for the GMF installation Stroope said it would be maintained on a daily, year-round basis by staff from the Green Box Arts Festival group. It would mark the group’s first year-round venture. “It is the beginning of year-round programming for Green Box,” said Stroope.

Green Box is mostly known for their several week festivals done every summer around the July 4th holiday. They often have showcased major art works viewed in nationally-recognized museums. But their displays are usually just done for a temporary period.

That won’t be the case with the Turrell Skyspace project.

A Boom For Tourism and Businesses

Stroope continued to emphasize the positive business and tourism aspects at last week’s discussion. “This is something the chamber can really sink their teeth into,” said the Historic GMF Foundation representative, who often serves as the main face for the Green Box Festival. He also is a member of the new Parks, Trails and Recreation Advisory Committee.

During an earlier presentation before the Chamber board, Stroope emphasized the year-round benefits of the project.  He has noticed too a growing acceptance of the Green Box mission in Green Mountain Falls.

Besides the installation, the project calls for fully-handicapped nature trails, connecting the town hall area to the Gazebo, a scenic overlook, a restroom and enhancements of the Red Devil Mountain area, located in the backdrop of GMF. Part of the annexation also includes the old Joyland Church property.

Although not actively discussed, future plans mulled could include the development of a hotel in the Joyland Church area. This idea was once thrown out before the planning commission.

The trustees mostly gave the project a positive response. Their main concerns dealt with such issues as safety, security, maintenance and project timing. They specially inquired about the town’s responsibility.

Newberry asked that the project developers add an additional restroom in the Joyland area, citing restrooms as a big demand.  Stroope didn’t see this as hurdle, noting that this a “multimillion-dollar investment” and a very “aggressive plan.”

Also, Trustee Dyani Loo wanted more concrete numbers regarding the potential visitors to these sites. Admission to the installation would be free to the public, at least at the outset. Pending the development of the coronavirus epidemic, a reservation system may eventually be required.

A few comments were made by local residents, most of which were positive.  Resident David Douglas, a member of the fire mitigation committee, said, “I am in strong support of the annexation.  This is a huge value to our town. Everything they (Green Box) do is first rate.”

Former trustee Mac Pitrone, though, raised a laundry list of question marks. These dealt with concerns over additional traffic, trash and related problems. Plus, he wanted to know specifically about the tax benefits to the town. “There is no reason to rush into this,” said Pitrone.

Stroope and town officials, though, emphasized that the project has been anything but a rush job, as annexation plans have been in the works for more than a year.

As for specific tax gains for GMF, Stroope cited the use tax, applied for construction, as the initial big winner. He said he would provide the trustees with more numbers regarding a projection of visitors.

The trustees cautioned that their initial approval of the annexation petitions is just the first-step.  Their green light advanced the project to a public hearing on Jan. 5.