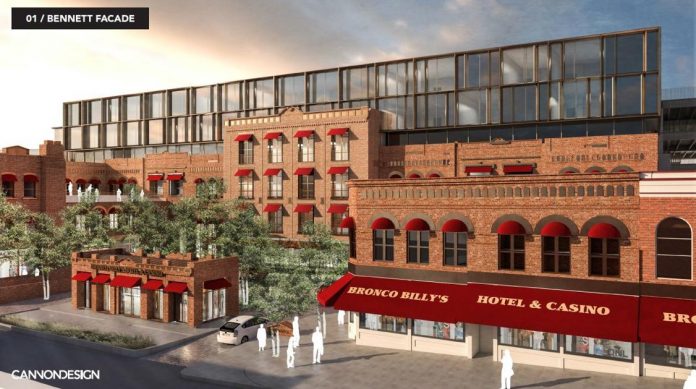 One of Cripple Creek’s most ambitious proposed casino/hotel projects may return to the public forefront.

Only this time, the council wants to see tangible progress, and not just elaborate conceptual drawings.

That was the theme of last week’s brief council meeting that focused on a key casino development issue. Dan Lee, chief executive officer of  Full House Resorts, owner of Bronco Billy’s, told elected leaders their company is committed to proceeding with earlier plans for a  huge hotel addition, but with a revised proposal.

And unlike a presentation last summer, .the Full House CEO expressed much optimism regarding their company’s future and that of Cripple Creek.

“COVID is still an issue,” said Lee. But on the upside, he said that since reopening in the middle of June, following a three-month closure,  Bronco Billy’s has done quite well.

He also cited hopeful financial signs. “The vaccine is right around the corner,” said Lee, who also mentioned a more favorable investor climate. “It’s a better project, if we have hotel rooms,” said the Full House Resorts CEO. And with the approval of plans to end betting limits and add new games, the picture gets even better, noted Lee.

Baxter Lee, general manager, of Bronco Billy’s, stressed similar comments later in the discussion. “We are still committed to the project,” he said. “The company’s commitment is 100 percent.”

An attorney for Full House Resorts, indicated that the new renderings, mentioned by Dan Lee, are just aimed at “making the project better.”

However, the council last week couldn’t officially address or even listen to any revised plans, unless a new application is submitted to the city. This restriction was echoed by Councilwoman Meghan Rozell and by city attorney Erin Smith.  “It wouldn’t be appropriate,” said Smith.

Both Rozell and Smith were referring to the fact that Billy’s previous multimillion-dollar hotel development pursuit, approved in 2018, was done through a quasi, judicial process, meaning that details weren’t presented until an official public hearing. If Billy’s wants to present a revised hotel expansion plan that alters from previous approvals,  then it needs to file the proper paper/permit work with the staff.

This previous approval followed a series of lively meetings, as the proposed nearly $100 million development was given the designation as a project of special merit. This allowed the company to take down a few historic structures and it  set the stage for the vacation of a major roadway.

But with the COVID epidemic, the project was officially put on hold last summer, and the city, in a rare move, agreed to relinquish a nearly $1 million performance bond.  A certain amount, estimated at about $150,000, was retained, to protect the city to do the  necessary infrastructure work, if the developer doesn’t do any aspect of the project.

In fact, the council at last week’s meeting was more interested in construction details with the new mega, indoor parking garage, the first phase of the Billy’s development.  Mayor Milford Ashworth urged the casino company to proceed with the first phase as soon as possible. He cited an erosion situation in the project site area, if work doesn’t occur. “If we get a rainy season, we will have a problem,” said Ashworth.

He described a needed amount of necessary storm drainage work.

Concerns were also raised if the reduced performance bond on the project is enough to cover the necessary infrastructure.

Jeff Regester, who has been hired to improve the current site and do the storm drainage project, stated that this amount is adequate to do the necessary work. Regester said he plans to work on the site shortly, in preparation for the parking garage construction. “We expect to crank up very soon,” said Regester.

The Bronco Billy’s representatives stated that the company hopes to get the start on the parking garage in late March or early April.

And in the near future, the company plans to unveil revised plans for their hotel.

That’s good news for the city council, which has received concerns about the lack of progress with this project after the elected leaders gave Billy’s a hefty amount of leeway from the current historic preservation guidelines in previous approvals.

During the earlier hearings in 2018, city officials and residents clearly favored the push for more hotel rooms and resort-like amenities, even if certain historic rules aren’t complied with.

No Big Surprises in 2020 Election

In other action last week, Solomon Malick of the Peak Government Affairs, the city’s head legislative lobbyist, gave an update on the 2020 election.

Malick told the council that the face of the state House and Senate hasn’t changed that much, with the results.

On the downside, he stated that the coronavirus has crippled state spending pursuits and that any bill with a fiscal note is as good as dead.  Unless fiscal legislation is tied to a stimulus package, it won’t get approved.

And on the upside, Malick touted the overwhelming state support of Amendment 77, the proposal to end betting limits and add new games in Cripple Creek, Central City and Black Hawk.  Malick believes this will serve as  big plus for the community.

He also -praised the recent cooperative effort to keep the Cripple Creek casinos open, giving kudos to gaming operators, city leaders and state officials. “It is going to have to be a team effort,” said Malick in citing the strong level of cooperation. “This is how we need to be working together.”

Similar sentiments were echoed by Interim City Administrator Ray White, who cited  this as a  prime team effort, and stated that many players were involved.

This more than doubled the number of voters (on a percentage basis) who picked the previous presidential  Democratic nominee, Hillary Clinton. In the heavily contested U.S. Senate race between Democrat challenger John Hickenlooper and Cory Gardner, state voters favored Hickenlooper by a nine percentage points.

“The state is moving in more of a progressive direction,” admitted Malick.