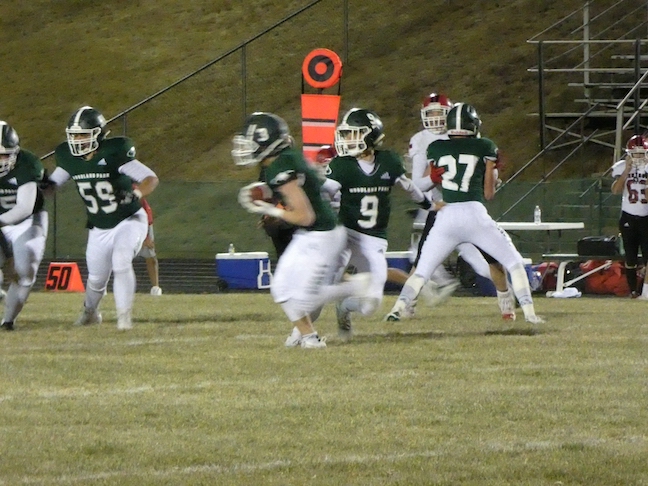 WP Team Squares Off Against Elizabeth For Probable Last Contest

In any case, The Woodland Park Panthers were dealt a fierce beating last week from an out-of-league team they never played before. It wasn’t the season’s home finale they wanted. 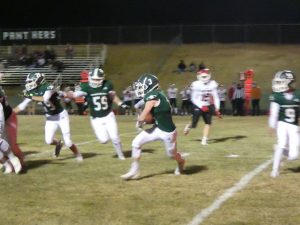 rescheduled game against the 1A Centauri Falcons, traveling up from La Jara, located south of Alamosa. The brutal bout ended in a 38-8 Panther loss as the Panther boys struggled to get points up on the board.

The Panthers were originally supposed to play Middle Park High School, which is located near Granby. But Middle School decided to opt out. According to school officials, the high school first was struck with elevated numbers of cases of COVID-19 early in the season which kept them from practicing.

Then, the town was threatened by the East Troublesome fire which was nearby and forced several evacuations in the area. As a result of all of the natural disasters sustained by the community, the boys on the team decided not to play football this year.

Instead, the Colorado High School Activities Association made the decision to reschedule the game and match the Panthers up with another team. The Panthers play in the 2A league and they were matched up against a school that plays in the lower 1A league.

However, Centauri proved to be an all-star team as they are now ranked as top powerhouse statewide in the 1A league. In fact, prior to last week’s game, they scored mega numbers and shutout the first three teams they played by 66 points or more.

Therefore, even though the Panthers took a devastating loss, they scored more than any other team has against the Falcons. The Panthers also kept the Falcons to the lowest amount of points per game.  Still, these stats didn’t offer the Panthers much consolation.

This was the third straight week, Woodland Park competed with a  football powerhouse.  So talk about bad scheduling luck.

The Panthers played a tough game that cost the team at least two major injuries, halting play for an extended amount of time. One of the injuries stopped the game for around 30 minutes, while paramedics surrounded the Panther player who was down on the field. The player eventually was hauled off the field and waved at the fans as he left.

Since the Panthers suffered that last loss ,their hopes to play in a seventh playoff game in 2020 have basically dwindled. The Panthers are currently fourth in their league with a 1-2 league record and even with a win against Englewood this week won’t would not qualify them to play in the postseason. 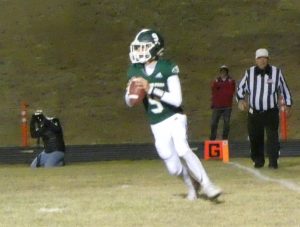 However, despite the setbacks the team has had this season, they have played quite well and many players on the team have put up stellar statistics. Junior Quarterback Mason Pyles has been the team’s lead QB for four games this season, passing for 431 yards and five touchdowns. Senior Quarterback Colin Kucera has also come in clutch during the  two games he assumed the QB saddle, earning141 passing yards and throwing two touchdown passes.

Favorite targets of the team’s quarterbacks include Senior Wide Receivers Bryson Cox and Tyler Baldus. Cox caught the ball 16 times, gaining a total of 179 yards and crossing the goal line twice. Baldus so far this season has had 11 receptions for 122 yards and three touchdowns.

The Panthers have also had a solid rushing game this season as they have earned a total of 564 yards thus far. Senior Running Back Braden Roskam leads the team on the ground this year with 64 carries for 361 yards and two touchdowns. Sophomore Aiden Hernandez comes in second place on the team in rushing with 17 carries for 54 yards.

For many of their games, though, the Panthers rough and tough defense has been what has carried them to victory. Roskam, when playing defense, has led the team in tackling the opponents by getting 28 solo tackles and nine assists.

When it comes to sacks, though, Hernandez leads the pack by getting the quarterback down three times this season. Cox has also got two sacks this season that resulted in a total of 12 yards lost.

In the defensive backfield, Baldus and Junior Andrew Harper have also been able to make some huge plays by intercepting the ball. Baldus has picked the ball off 4 times for a total of 38 yards which is an average of one per game. Harper has snagged two picks for a total of 17 yards.

The Panthers’ special teams has fared well, making some good plays that have helped turn momentum around this season. The group is led by Junior Kicker/Punter Alex Vonderharr, who has made three out of three field goal attempts, nine out of ten point-after attempts, and getting touchbacks for 13 out of 17 kickoffs.

This week the Panthers really need to focus on all aspects of the game as they play on the road during their last regular season game against the 1-3 Englewood Pirates. Even though Englewood only has a 1-1 league record they have a history of being a tough team to beat.