To begin with, it was looking pretty dim in Bronco country. The Broncos started the third quarter down by 11-points and had only converted three first downs in the game to that point. Their only score to this point was a field goal that was set up by a Justin Simmons interception of quarterback Justin Herbert.

The Broncos started that drive in the 15-yard line and couldn’t score a TD. It was a dismal failure that we’ve seen all too often this season.

Bronco Quarterback Drew Lock was struggling badly and looked like he was completely overwhelmed by the Chargers defense. By the third quarter, it was looking like a Chargers rout of the Broncos.

Here is where I have to defer to the friends, I watch these games with every week. I was pissed. I told my buddies I’m leaving in the third quarter. One of my friends, who is a staunch KC Chiefs fan and usually doesn’t watch the games with us said, “Don’t give up. It ain’t ’ over.” He tried to keep us in the game.

Well, the third quarter started with a Chargers 75-yard drive for a touchdown.

Broncos followed that Charger TD with a three and out. Then on the next Chargers next drive they scored a field goal. 24-3 Chargers. Uhg. I was about to start packing my stuff to leave.

Then when Phillip Lindsay ripped off a long run for a touchdown, there was a spark of hope. A dim one, but a spark. 24-10 Hmmm. OK I’ll stay a little longer.

The Bronco defense stepped up and held the Chargers to a three and out. Broncos got the ball back. Lock throws a pick. But wait, our Chiefs’ fan is still telling us we can win. WHAT? 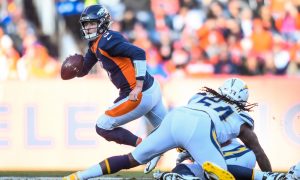 Boom. Next play, Herbert throws a pass to the end zone. Boom. Picked off by Bryce Callahan and the Broncos get the ball back on their 20-yard line. Four minutes later the Broncos are in the end zone. Touchdown Broncos 24-17 Chargers.

Now before I continue, I have to say, there aren’t a lot of games that end this way.

Chargers get the kickoff, drive down for another field goal. 30-24 Chargers.

Broncos answer with a 60-yard, 14-play drive that is set up on the Chargers 1-yard line after a Chargers’ pass interference call in the end zone. With one second left on the clock and one play to determine the win or lose, Drew Lock hits Hamler in the end zone for a touchdown. Kicker Brandon McManus puts the kick after through for the win. Broncos 31, Chargers 30. HOLY JESUS!!

During the pregame show on CBS, when the talking heads predicted this game, they didn’t even mention the Broncos. It was all about Justin Hebert and his excellency. Well, Hebert played a good game and lost another one.

After the game Head Coach Vic Fangio said, “This a game about players Our team is a 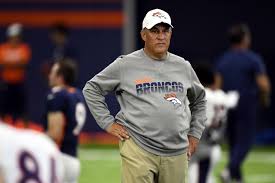 This was the first Bronco home game win.

Shooting Down The Birds

So, after a nail biter last week, the Broncos go on the road to face the Atlanta Falcons. Last week the Falcons beat the 3-5 Carolina Panthers to go to 2-6 on the season. Odd that, the once mighty Falcons have slipped so far as to struggle to beat the Panthers.

The Falcons still have one of the league’s best quarterbacks, in Matt Ryan. Ryan has one of the best, if not the best wide receiver in the game, in Julio Jones.

Last week Jones caught seven passes for 137  yards against the Panthers. Unfortunately for the Falcons, Matt Ryan is not the Matt Ryan of years gone by. He threw for 281-yards on 30 attempts last week with no touchdowns and one interception.

TMJ Pick: The Broncos have done well on the road, going 2-1 so far this season. The Falcons will be hungry, but so will the Broncos. This one is a tough call, but I think the weak Falcon defense will allow Lock and company to pull out another road win. The Bronco young guns on offense, KJ Hamler, and Jerry Jeudy, are stepping up. Hopefully, Wide Receiver Tim Patrick will be back next week to add to the Bronco offensive attack. Broncos win on the road 31-17.