Weatherman Bob Recalls Autumn Blasts of the Past

Last week’s snowstorm, which ravaged southern Colorado and parts of Teller, was the talk of the town.

But was it really that unusual? Probably not, as this is part of our region’s folklore, dating even back to the mid-1980s when our snowy October seizures made national television during a bizarre Monday Night football game that shut down the state. No one remembers who won that one, but they remember the snow.

Then, there was the infamous blizzard of October 1997 that resulted in a number of deaths 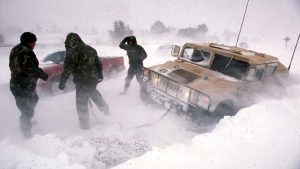 in the Pikes Peak region and made travel impossible even for those who owned 4-wheel-drive vehicles. That put quite a strain on local resources and tested the leadership of former City Manager David Buttery, who at the time served as the public works director.

I’ve been keeping snowfall records at my home in Woodland Park for over 15-years. The recent storm got me wondering just how unusual this was.

I checked my records going back 15-years and this is what I found. There were only two years out of the last 15 years that we did not get any snow in October. Those years were in 2014 and 2016.

Interestingly, since 2012, October snows have been less frequent and produced less snow. Climate change anyone?

As I mentioned earlier, in 2014 and 2016 there were no October snows. In 2012 there was only one October storm that dropped only 3-inches. 2013 also saw very little October snow with only 2-inches from 2 storms. 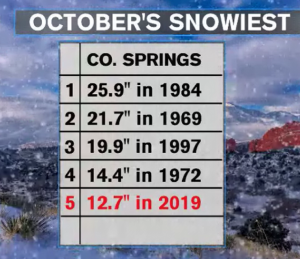 The snowiest October, according to my records was in 2006. That year we had five October storms that dropped a total of 45-inches for the month. The first snow that month was on October 7, and the heaviest of those storms dropped 21-inches on October 21.

While these records show a wide variation in snowfall for the month of October, they are not an indication of how much snow we can expect out of any given year. For instance, in 2015 we only received 3-inches of snow in October, yet 2015 was the second snowiest year of the last 15-years. According to my records, in 2015 there was a total of 155-inches of snow for the entire year. The snowiest year in the last 15-years was 2006 with a total of 201-inches.

For the record, the earliest snowfall in Woodland Park in the last 15-years was on September 2, 2009. We had two storms that month that totaled 9-inches. The latest snowfall occurred just last year when we had a storm that ended the snow year with a 3-inch storm on June 9.