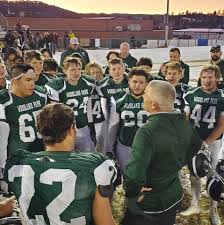 For the second week in a row, the Woodland Park Panthers clashed with a formidable football powerhouse.

Unlike their duel with  Delta, the Panthers came out charging, and played what head Coach Joe Roskam described as a very good game on both sides of the pigskin. 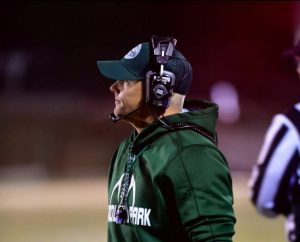 But it just wasn’t enough, as the Moffat County Bulldogs beat the Panthers in the waning minutes by a score of 27-23. A final Dogs drive proved to be the fatal stab, leaving WP with a four-point deficit with less than 40 seconds remaining. The win propelled Moffat to a 2-0 mark in the West League, and 2-1 overall.

With the loss, the Panthers are 2-2 and are facing elimination from any playoff prospects during a bizarre coronavirus-shortened season.  Still, the Panthers are fielding one of their most impressive squads in recent years.

“It was a  really tough loss,” said Roskam, in a post-game interview. “They played well and are a good team, but so are we. We are just going to have to lick our wounds and maybe sulk a little this weekend, but be ready to go back to work on Monday. We know what is at stake.”

The coach said he doesn’t see any major flaws in the team’s play, but stressed the importance of “working on the small things,” such as a missed block, pass, or tackle.  “Those are the things that determine whether you are a championship team or not,” he added.

The loss occurred in Craig, and it marked a homecoming bash for Moffat County. The Bulldogs celebrated their homecoming in a unique style, with a football delivered to the field, via a helicopter.

“It was a big deal for them,” admitted Roskam, who praised the play of the Bulldogs. Actually, it marked the first home game of the season for the Dogs.

In a game that featured a see-saw battle, the coach contended that the Panther team may have shown signs of weariness in the final quarter. “We just couldn’t close the door,” said Roskam.

The game actually started out good for the Panthers.

Woodland Park wasted little time in showing off their explosive offense and a deep pass to Woodland receiver Bryson Cox along the sidelines amounted to a 44-yard touchdown reception at the outset. The Panthers completed the surge too with an extra point, before five minutes were off the clock.

But Moffat County showed little signs of throwing in the towel.

An offensive drive, fueled by carries by Ethan Hafey, Caleb Frink and Evan Atkin did the trick, getting the Bulldogs within striking distance.   A short jaunt by Hafey got the Dogs on the board and tied up the game at 7-7 following a kick by Chris Cox.

The Panthers then took advantage of a key turnover and got great field advantage, just prior to the end of the half.  They scored on a 5-yard play to Tyler Baldus.  Although the point-after failed, the Panthers led at the half by a 13-7 margin.

At one point in the second half, they led by a 16-7 margin, courtesy of a 40-yard field goal execution.

But then the Dogs mounted an impressive comeback.

They scored two unanswered touchdowns and took a 20-16 lead.

The Panthers, though, refused to give up and re-grabbed the advantage 23-20, with less than seven minutes remaining.

But the Dogs got the final say in the game, with an impressive, melodical drive, capped by a short pass touchdown between Ryan Peck and Blake Juergens that nearly hit the ground. The Dogs made the extra point, and Woodland Park was left with only 32 seconds left.

Roskam cited the exemplary play of many offensive and defensive players, He classifies the game as one in which the Panthers performed well, but just fell short.  He said last week’s cliffhanger game was really determined by just a handful of plays.

However, Roskam lauded the fact that the team came back after the momentum clearly changed, in Moffat County’s favor in the second half.  Also, the Panthers clearly hit their stride after getting mauled by Delta the previous week.

This week, the Panthers play away again in Granby against Middle Park, a team it doesn’t know much about, in a non-league game.

It then plays Elizabeth the following week.

With the coronavirus schedule, Woodland Park is encountering many teams it never played in recent years. But unlike some in the region, such as Manitou Springs, at least Woodland Park is participating in “Friday Night Lights.”