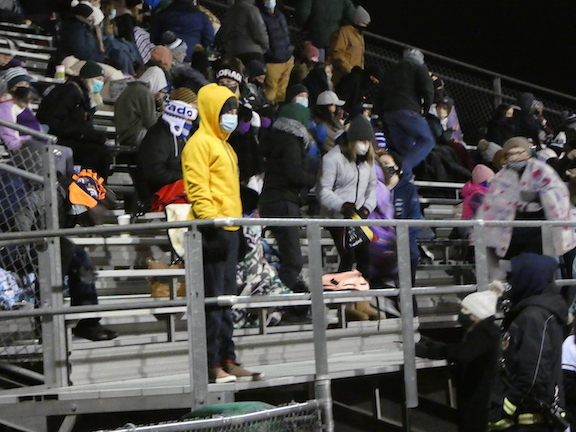 Woodland Park Faces Do or Die Scenario to Reach Playoffs

In front of throngs of television media cameras, the Woodland Park Panthers, enjoying one of their best seasons in recent years,  challenged the super-tough Delta Panthers during a frigid home game last week under Friday Night Lights.

It was the fight between two Panther teams, a showdown that captured much attention in 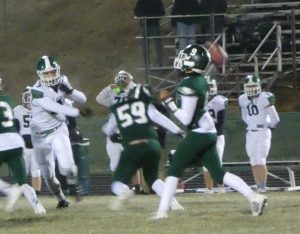 Unfortunately, as described by one well-known TV  sports commentator Friday evening, it just wasn’t Woodland Park’s night as they felt to the awesome  Delta team by 27-2. WP has now posted a 2-1 record.

Overall, Woodland Park gave it their all, and played a heck of a game. But they just got outdone by a team that appears more well-rounded offensively. It was also noticeable that the Delta Panther team sports much bigger players than Woodland Park.

The game started out close as Woodland Park had to punt on their first possession and then the stellar Delta offense drove down and threatened to score. But then the WP Panthers had a key play defensively when Senior Defensive Back Tyler Baldus intercepted a pass near the end zone.

The defense proved to be as good as they could be when they made several good game changing plays. The boys’ special teams were also on point all game, and near the beginning of the contest, put their offense in good scoring position.

But when it came to playing offense the WP Panther team struggled. It seemed as if every time they got close to the end zone or in the red zone, their quarterbacks threw interceptions due to strong pressure by the ruthless Delta defense.

The game at first went back and forth and the score was still close at the end of the first quarter. But then, the momentum quickly changed in Delta’s favor in the second quarter.

In the second quarter, Delta’s offense was able to put some points up on the board. During the quarter, Delta made two unanswered touchdowns and put the game up 14-0.

At halftime, Delta had a threatening 20-0 nothing advantage. Ouch! But, when Woodland Park came back after halftime, it looked like their defense started to step up their game.

In fact, Woodland Park’s defense played pretty well during the second half. They did give up one more touchdown, but that was it for the rest of the game.

At one point in the second half, after Delta intercepted, Woodland Park  got the ball back deep in their own territory. Woodland Park’s Sophomore Defensive Tackle Aiden Hernandez and Senior Linebacker Darren Genger then answered by sacking Delta’s quarterback in the end zone to earn a safety. And actually, that one defensive score would be the only time WP put points up on the board.

Even though Woodland Park lost, their coach Joe Roskam was still happy with the way the team played. “We played well on defense and we played well on special teams,” Roskam said. “And then offensively we just couldn’t get it going.”

The coach did say that he was impressed with how their defense played, despite giving up 27 points. “I think Eli Garner played as hard as anybody could play on defense,” Roskam said.

This week, Woodland Park hits the road and travels way up north to Craig, CO to take on the 0-1 Moffat County Bulldogs. The Panthers need to pick up a win on Friday if they want to stay alive in their league and they have a good chance to do so.

According to their coach, the team still needs to step up their game in order to be successful for the rest of the season. “We just gotta’ get better, that’s it,” Roskam explained. “We just played a really, really good team. There is no doubt that they are one of the best teams in the state.”

In fact, the Panthers basically need to win their next three regular season matches to qualify for a playoff spot. With the loss last week Woodland Park fell to second place in their league with only two league games left to play.

The Panthers are now 79thh  in the state overall and in 10th place in the state’s 2A league.

The 2020 coronavirus season, though, has been anything but normal. One of Woodland’s former rivals, the Manitou Springs Mustangs, called it quits for the year due to a school-wide pandemic threat. They will try to resume their season in the spring (see related story).