By now you know how the Broncos fared against the Steelers, so let’s look at the long-awaited Week Three home game against the Tampa Bay Buccaneers, the first Denver game that will feature actual fans.

In fact, the governor made a special edict to benefit the Broncos, so no pressure Mr. Elway.

Due to earlier press deadlines this week, I’m a little handicapped on this pick. That said, the prospects don’t look good for a Broncos showdown with the Bucs. Don’t bet against gentle or horrific Tom (Brady, the Bucs quarterback).

The Bucs almost pulled out a win against the New Orleans Saints in week one. It was Tom Brady’s first game in a Buc’s helmet since being dumped by the Patriots. Brady didn’t 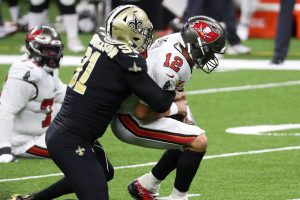 exactly look like his old self, but of course the Bucs aren’t the Patriots. Brady threw two picks, one for a Saints TD.

Unlike Patriot’s coach Bill Belichick, Buc’s coach Bruce Arians was not shy about criticizing Brady’s performance. Responding to Brady’s pick six, Arians said, “If you’re throwing an out-route, you don’t throw it low and inside, and that hadn’t been the case up until that one. He was a little late on it and probably better decision to go somewhere else with the ball.”

During the mid-week press conference after the loss to the Saints, Brady responded to Arians criticism with a curt, “ He’s the coach, I’m a player.” remark. But the look on Brady’s face told another story. He was pissed.

Later in the week Arians was a little softer on Brady and he walked back blaming Brady for one of the two picks. Arians said Wide Receiver Mike Evans ran the wrong route.

Prior to the season, NFL talking heads were high on the Buc’s chances to make a run for the Super Bowl. CBS Sports Writer John Breech, said, “Arians has been a head coach for seven seasons and in each of those seasons, he’s come up empty in the Super Bowl department, so to fix that problem, he brought in a secret weapon for 2020: Tom Brady. If the Buccaneers are going to win their second Super Bowl in franchise history, this feels like the season where it could happen.”

The Bucs have indeed beefed up their team in the off season. Besides bringing in Brady, the Bucs added Brady reception ally Rob Gronkowski (also a former Patriot) at tight end. Last year, the Bucs had the best run defense in the league. The team managed to retain nearly the entire cast of its defensive front despite the pull of free agency. High-profile veteran Ndamukong Suh and rising young star Vita Vea got a lot of credit for that solid wall up front, and deservedly so.

But Will Gholston filled out the three-man front in the base defense and quietly had an outstanding year in a defense that was well-suited for his size and skills. All three of those players are back to form the Bucs’ first line of defense against ball carriers.

Enough about the Bucs. As stated at the beginning of this article. With devastating injuries to the team defense, the Broncos are in a next man up situation. With Linebacker Von Miller out for the season and Cornerback A.J. Bouye out for several weeks, the Broncs are relying on two rookies in the secondary to pick up the slack. I’ll be interested to see how

The Bronco offense is also hurting due to the injury bug. Phillip Lindsay is out for a few weeks with turf toe, Left Tackle Garrett Bowles is nursing a bad elbow, Wide Receiver Courtland Sutton is dealing with a bad shoulder, and speedster K.J. Hamler is recovering from a pulled hamstring.

With all that being said, I don’t think the Broncos can overcome the Buc’s defense, and Brady is likely pissed enough to want revenge on the Broncos for past defeats he endured with the Patriots. This one goes to the Bucs and the Broncos start the season in a familiar hole.