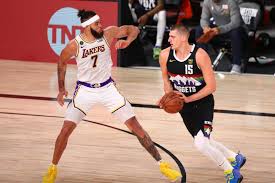 At first observation, many Denver Nuggets fans, including myself, thought that the team would be another victim of the COVID-19 choking curse, like other Colorado pro sports lineups.

However, to my surprise, I was wrong and am now eating crow. Last week, the Nuggets started playing the LA Lakers in the conference finals after two close playoff series victories, when they fooled the experts, such as so-called b-ball TV wizard Charles Barkley.  Hey Charlie, buddy, worry about your ailing golf swing and don’t try to analyze any Denver team any longer. Your anti-Nugget bias is pretty obvious.

The recent Denver accomplishment was big and lauded by fans because the team hasn’t won two rounds of playoffs and made it to the Western Conference Finals since 2009.

To remind folks a bit, that was in the old days, when the late Kobe Bryant of the Lakers clobbered then Denver star Carmelo Anthony and gave our little Nugs a fatal stroke of reality in 2009. We just weren’t ready for Kobe and Company who showed his competitive and killer b-ball spirit bigtime. Great Memories of Kobe and even the Nuggets, as it still was quite a run for Denver. Maybe, this time, our luck will change, but still my bet is on the Lakers.  Just too much recent inexperience in the big playoff showdowns, like the  Western Conference Championship.

The Nuggets have only experienced  the conference finals one other time in the history of the franchise in 1985. The Nuggets have yet to ever play in an NBA Finals game.

Gaining a place in the conference finals, however, did not come easy for the Denver team. The Nuggets looked pretty good during the season before the COVID-19 pandemic struck the nation and forced the temporarily halt of the sport as they were staying in third place in the Western Conference closely behind the second place LA Clippers.

Then, when the Nuggets came back to play after the unintentional break, they had their fans across the state worried as if they forgot how to play ball while being quarantined. The Nuggets looked anything but impressive during the league’s final regular season games after they started back up. But, since they had a good enough record before the season’s interruption, they were still able to earn a seat in the playoffs.

During the first round of playoffs against the Jazz, most Nugget fans at first thought they could easily conquer the series but then after game 2 the Jazz won two in a row and were up 3-1 on Denver. The team then kicked it in full gear when they came back and won three matches consecutively to take the series.

During the second playoff round, many of us thought that the Nuggets stood no chance against the tough looking LA Clippers. And at first, we were right and once again a team in the NBA playoffs got on top of the Nuggets when they led the series 3-1.

But, once again the Nuggets surprised everyone and prevailed on to the conference finals for only the third time in their franchise’s 43-year history. In fact, it was the first time that anyone in the NBA has ever won the first two rounds of playoffs when they started out a series in a 1-3 deficit.

During Game 7 last week, the Nuggets instilled a stellar play sequence where the team went only for three pointers. The Nugs found themselves behind in the third quarter and then they started lining up their players for field goals and were able to make several in a row. The multiple three-pointers gave the team good momentum and they were able to get on top of the Clippers from behind and stay in the lead.

If the Nuggets can pull off some good rhythmic plays like they did in Game 7 against the Clippers, I think that there is a small chance that they could pull ahead and beat the super-hot LA Lakers. Nugget fans everywhere would absolutely love to see their team advance to the Finals for the first time ever, but they all know it is going to be a tough road through the Lakers.

The Lakers, led by LaBron James, have been hard to stop all season and took first place in the Western conference. Most analysts have predicted that the Lakers will walk all over the Nuggets, but only time will tell and remember many said that about their last round against the Clippers.

During Game 1 of the conference finals, the Lakers proved most right by easily walking over the Nugs 126-114. The Denver team just could not seem to pick up any momentum against the hot Lakers and they were behind most of the game. However, the Nuggets are hungry for a win and they technically do still have time to turn things. Besides it has already been proven that absolutely anything can happen in the year 2020.