Nonprofit Groups Stepping Up to the Plate to Sponsor Events

Can the fiscal news get any worse for Cripple Creek?

First, the town got hit with the sudden closure of all gaming establishments for nearly three months; then the cancellation of virtually all special events and theater shows occurred as a result of COVID-19 restrictions, and a consequential financial guillotine came down hard, slashing the town’s budget by $2.2 million. This severely hurt many departments, such as marketing/special events and parks and recreation.

Now, the latest bite could come in the form of a  huge,  nearly 50 percent drop in related gaming tax revenue, with the main culprit identified as  bad timing.

Last week, Cripple Creek Finance Director Pau Harris delivered the bad, but not unexpected news. According to Harris, the closing of the casinos had a terrible effect. But another more serious sting has come due to an unprecedented cut in the amount of gaming tax revenue the town would receive from the state.

And the latest financial clobbering may go down as a case of just bad luck and timing.

The state of Colorado taxes casinos on a graduated basis, with different tiers established on an accumulated annual basis.  Licensed gaming establishments are taxed based on their accumulative annual winnings. The current system doesn’t tax these winnings much initially, but then eventually hits some operators with a 20 percent-plus assessment on their collective adjusted gross proceeds throughout the year.

So unfortunately, when the state ordered the mandatory shutdown of all casinos on March 17, this occurred when many gaming establishments locally would have entered into higher tax brackets, resulting in more tax revenue for the associated cities and counties. And when they closed, this resulted in zilch tax revenue.   Unlike the city, the state’s fiscal year runs from July 1 to the end of June.

“This was the worst time to be closed,” said Harris, in speaking about the mandatory closure of Creek casinos last spring. “This was an unfortunate factor.”

If the closings had occurred at a different time, such as the beginning of the state’s fiscal year, the financial sting would not have been nearly as bad, according to Harris.

Preliminary estimates indicate a slicing of gaming tax revenue by 41 percent, compared to previous years, according to Harris.

The Creek finance director had been predicting a dire loss of gaming revenue, but not to this extent. The situation is also compounded by the fact that many large gaming companies split their operation into individual licenses, meaning less tax dollars for the city.

The sting only adds to the financial pressure facing the city, setting the stage for some interesting budget meetings in early October. The town has already been hit by a record 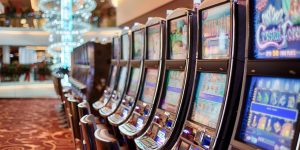 low number of betting devices due to the COVID-19 restrictions. Device fees constitute the main funding source for the city of Cripple Creek.

On the upside, the picture may get  better in the near future.  A variance has been sought for a return to more normal casino activity with table games and 24/7 alcohol service. Plus, the tax-related scenario may work better for the city in 2021.

Also, despite some activity in COVID activity in  Woodland Park and along the U.S. Hwy. 24 corridor, the epidemic so far has spared southern Teller and local casinos, noted Harris. Creek casinos are batting zero, as far as any positive COVID infections. The southern Teller area is only constituting about six percent of the total cases accumulated in Teller County, since the epidemic struck the region.

And on a county-wide basis, the COVID-19 scare has been greatly reduced since a big hike around the July 4th holiday.

Harris didn’t announce any specific financial changes, as  a result of the cut in tax revenue. But this topic may take center stage at the forthcoming budget hearings set for Oct. 7 and Oct. 8.

City officials last week also announced one big staffing change. Bill Gray, the city’s planning and community development director for the last several years, has resigned to take a job with the city of Colorado Springs.

As a result, this position will become and may remain vacant.

According to Interim City Administrator Ray White, these services will be contracted out initially and handled by current staff  members. White wished Gray the best and conceded that his services will be missed. Gray played a key role in orchestrating the recent housing study and trying to simplify current regulations to open the door for more development.

The reduced revenue will probably force the city to run a tighter ship when it comes to hosting events. Last week, several representatives of nonprofit organizations made presentations and announced an interest in stepping up to the plate.

The city’s annual Fall Festival is being converted into the American Legion Fall Festival, with a variety of activities scheduled at the Pocket Park next to city hall (see related letter to the editor). A number of local organizations, such as the Two Mile High Club, American Legion, American Legion Riders, Victorian Society and the Teller County Marksmanship and Self-Defense group have joined forces.

Local   resident Michael Lindsey, a decorated Vietnam War veteran, urged the city to consider that the city do events that benefit the community and the stakeholders involved. He hinted that some events are not benefitting the community, and that’s not a good scenario under the current budget restraints.

In other nonprofit action, the  local Faith Fellowship Church in Cripple Creek has agreed to act as the main entity to support the efforts to keep the Gillette Springs, located off Hwy. 67, open. A long-term plan has been negotiated between the Gillette Flats Springs organization and state officials to maintain this water source for many unincorporated residents in the region. This followed an emotional appeal at a recent council meeting.

No one disagrees with the intent of the group, which has sought to get a nonprofit to support their cause.

“The response has been overwhelming,” said pastor Brian Cooper of the Fellowship Church. He said their organization has agreed to sponsor the effort, which has gained many followers. He cited the many benefits for the region and area residents.