Miller injury escalating fears of another season of doom

Last week my projections for the season, with the Broncos expected to make the playoffs as a wildcard contender, took a major hit. 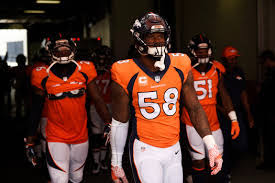 Team captain and star linebacker Von Miller suffered a probable season-ending ankle injury. Plus,  Wide Receiver Courtland Sutton suffered a shoulder injury, which may force him to miss the first game of the season against the Tennessee Titans.

Miller went down with a freak injury on the last play of practice. He has a tendon injury and is expected to undergo surgery. The loss of Miller will hurt the team’s chances of winning severely. Sutton’s injury may or may not affect winning chances over the long run, but even missing one game could affect the final win/loss column.

To add to the  Bronco woes, Bradley Chubb is still feeling the effects of last year’s season ending injury and throughout camp has been treated with kid gloves. He may not be one-hundred-percent against the Titans and I fear he may wind up re injuring himself.

What makes matters worse is that the Broncos depth at linebacker is lacking. With the release of Todd Davis ,a couple weeks ago, the linebacker corp. will be relying on Malik Reed and Jeremiah Attaochu to pick up the slack. Both guys played well last year when Chubb went down, but neither is the quality of Miller.

The Broncos are bringing in a few free agency linebackers to add to the roster, but that field of players is not very good. Denver will likely add another outside linebacker to the

roster. One candidate to watch is former Chicago Bears edge defender Isaiah Irving, who has played under Broncos coach Vic Fangio. Irving bounced back and forth from the Bears’ practice squad to the active roster, though he did appear in 13 games in Fangio’s final year season with Chicago.

The Broncos were also courting former Green Bay Packer, linebacker Clay Matthews, but that didn’t pan out. Source vary on why Matthews won’t be a Bronco. Some say Matthews snubbed the team while other say he doesn’t want to play at all. It doesn’t matter either way as Matthews would not be game ready for some time.

Sutton was evaluated for a shoulder injury, and it revealed he suffered an AC joint sprain. The latest on his injury is that it is not as bad as it could have been and will not require surgery.

Sutton went for a ball and sustained the injury during practice, which forced him to leave. Sutton never returned to practice and was officially listed as limited in the team’s daily injury report.

So, where does this leave the Broncos? 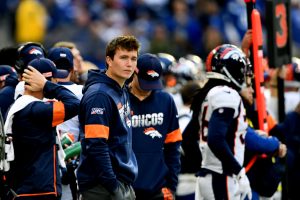 is if Quarterback Drew Lock, and his host of weapons can score at least 31 points per game. It’s not impossible, but remember, Lock is still basically a rookie. Sure, he played five games last year, but that is not enough of a sample size to evaluate his potential.

What was once predicted to be a top five defense is now completely thrown out the window. Miller gained a lot of muscle in the off season and was pumped up to make this season the best of his career.

Chubb is now a complete unknown, since he is still feeling at least a little bit of pain from last year’s ACL injury. I don’t have a lot of confidence that he can make it through the season unharmed.