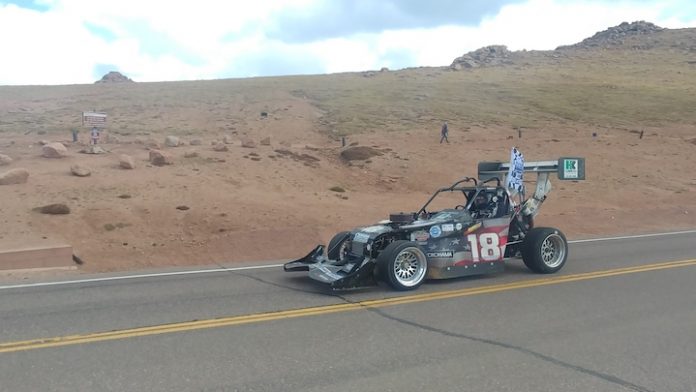 In a feat that surprised some race insiders, Vahsholtz was crowned the King of the Mountain in 2020 for the first time ever. Even though Vahsholtz, who owns a local and popular auto repair shop in Woodland Park, is the most successful race car driver in the hill climb’s history of the race by winning 23 titles out of his nearly 30 runs. Still, he was never named the King of The Peak until Sunday afternoon. But he now holds the designation as the fastest racer on the mountain.

However, Vahsholtz’ victory didn’t come easy as he only beat his toughest competition Open Wheel racer Paul Dallenbach by half a second. In fact, the top three racers that day (Vahsholtz, Dallenbach, and David Donner) all finished within a second of each other. 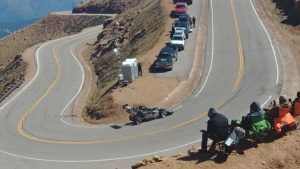 Vahsholtz also surpassed several challenges in order to take home his newest and possibly sweetest victory. In fact, he broke the record in the Open Wheel Division, and clocked his best personal time on the mountain. Due to the coronavirus pandemic, Vahsholtz was not able to race the Flying Lizard Racing team McClaren F1 and did not have Toyo Tires sponsoring him this year like he has had for the last two years.

After the news hit that Vahsholtz would not be racing the same car he had for the last two years, the local race hero decided to spruce up his Vahsholtz Racing Open Wheel car that had not seen America’s mountain since 2017. After spending more than $10,000 out of his own pocket on Yokohama racing slick tires and other expenses, Vahsholtz was able to enter the race with his older car. The work was worth it as he put out his best time ever by averaging 75 miles an hour over the 12-mile uphill course that contains 156 turns.

His victory was also significant because he is the first American-born racer to take home the King of the Mountain title for the last 15 years. Due to the recent pandemic restrictions, most foreign competitors with the exception of one could not compete this year .  And the one foreign driver that competed, Pikes Peak Open Division Driver Akio Kobayashi, did  just because he happened to be in the country before the pandemic struck.

However, Vahsholtz may have had some luck on his side because the racer with the fastest qualifying time did not end up finishing the race. Time Attack 1 Division driver David Donohue was the fastest during practice and he sped through the picnic grounds (which is the course’s longest straightaway) at speeds exceeding 135 miles per hour (MPH), a speed that was 10 MPH faster than Vahsholtz in the same section. Donohue had a good run until he blew a tire which forced him to pull over just above Glen Cove, which is the race’s halfway point.

Other racers had success on the raceway as well including Exhibition Division driver Randy Pobst, who wrecked his brand-new Tesla during practice last Wednesday. But Pobst was able to rebuild his car using another Tesla just before race day. Most of the racers had a successful finish with the exception of only three racers out of the 40-plus drivers that did not finish. Even though the three had to stop before they made it to the summit, the race ran from start to finish without any red flags. 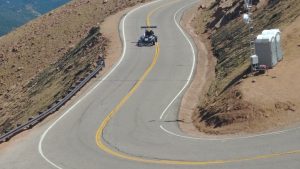 Mother Nature also blessed the course during the race’s 98th running as those at the start line saw a warm and sunny day with brief moments of cloud cover. Higher up the mountain, above timberline, temperatures mostly stayed in the low 50’s and it only tried to rain/snow during a couple of instances that didn’t last long.

The only setback to the race this year was the lack of energy coming from the raceway’s sidelines since this year was the first time in history the race ran without fans due to the global pandemic. And, the no fans rule was so strict that during the race up at Devil’s Playground, a handful of Teller County Sheriff’s deputies were walking up and down the rocky hillside at 12,000-plus feet in elevation just after the race started and kicking off spectators who snuck onto the mountain by foot by taking the trail that starts at the Crags Trailhead located south of Divide.

“If you walked all the way up here, go ahead and walk back down,” a deputy was heard saying to spectators that were illegally attempting to watch the race at Devil’s Playground. “Hey, at least you got to watch a couple of cars go up!”

However, to make up for the lack of fans, the crew members of several different racing teams at the start line tried as hard as they could to pick up the slack. They could be heard cheering, screaming and ringing cowbells as each drive left the start line.