In a move that didn’t provide too many surprises, Stan Bishop will again assume the position as the Teller County Undersheriff.

Bishop, who most recently worked as the jail’s commander, has served with the sheriff’s office for the last 35 years and actually held the undersheriff position in the past under a previous administration.

Bishop first started his law enforcement career when he put on a badge for the sheriff’s office in 1981. After a couple of years, he got hired on by the Cripple Creek Police Department where he served as chief  for a short time. He then went back to work for the sheriff’s office in 1987 where he worked a combination of patrol deputies and  to played a lead role in manning the county’s jail. 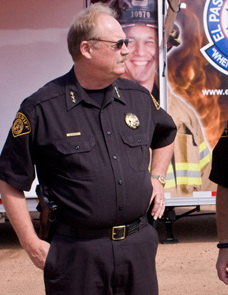 Bishop has gone back and forth from being the jail commander and the undersheriff for the last several years. Throughout his career at the department, he has worked under six different sheriffs.

During his career, Bishop has worked in both the old jail in Cripple Creek, which is now a museum and the 100-plus-bed facility in Divide.  The new undersheriff took command of the jail when the sheriff’s department assumed control of the facility,  following a several-year operation by a private company.

“In 1999 I was appointed the administrator of the jail to take over and run it, and that was a challenge” Bishop said. “It was a lot different from when you look at working the little jail in Cripple Creek where I started my career and then nearly 20 years later stepping into a bigger facility. I remember back in the early ‘80s all the food that was served was Swanson’s Hungry Man dinners. We served those for breakfast, lunch and dinner every day. I remember the people that were going to court from the jail in Cripple Creek they would chain them up and walk them right down the street to the courthouse.”

Bishop also said that prior to gaming, the county experienced some limited crime activities, such as burglaries of houses in the region that were used as summer homes. In the post-gaming ear, he said the county grew from 9,000 to nearly 30,000 people over the last few decades. As a result, the sheriff’s department confronted a much wider array of crimes.

Bishop said that the crimes committed in Teller now represent many different offenses. But he stressed that the department still deals with many domestic violence complaints.

As for future challenges for law enforcement in the future,  Bishop said that marijuana grow operations will remain a problem for the county.  He also said that he believes that the county will experience more protests, like the one that took place in Divide nearly two weeks ago.

This incident turned into a bizarre brawl between supporters of the Teller Sheriff’s Department and ICE (Immigration and Customs Enforcement agency) protesters, with two outside groups holding a rally.

However, the new undersheriff said that he is looking forward to working in his current position once again in the future. “We have a great command staff and employees right now,” Bishop said. “We are full with employees and that is something that has not happened at this agency for about 10 years.”

Bishop is a similar face at the agency.

He has worked with the sheriff’s department longer than any other person working within the agency. When asked if he had aspirations to run for sheriff one day, the undersheriff quickly replied without any hesitation, “no.”