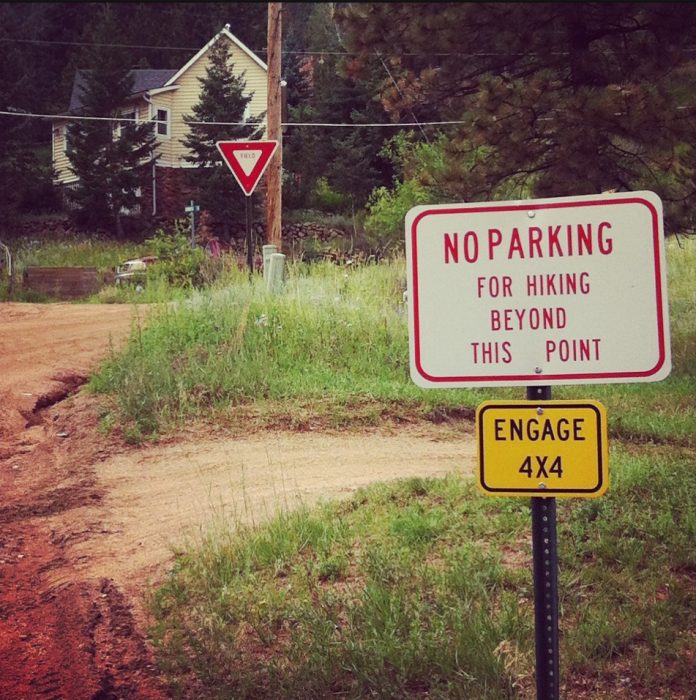 In yet another several hour public hearing regarding the future of the extensive trail network in Green Mountain Falls, the elected GMF Trustees voted last week to keep the current hiking routes fully open—at least for now.

They unanimously agreed to kill a proposed resolution that would have closed all GMF trails and trailheads due to the coronavirus pandemic.

But at the same time, the trustees conceded the town is facing major problems with crowds, parking, trash, loose dogs, trespassing and disruptive hiker behavior. One of the big problems with the trail routes in GMF is that the trailheads must be accessed mostly through residential streets.

This has created recent conflicts between trail advocates and long-time residents.

While agreeing to keep the current trail system—representing 12-plus miles of local trails, 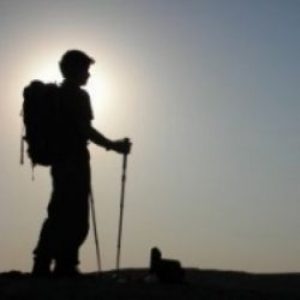 with some linking into extensive regional loops—open, the GMF Trustees want to establish a volunteer trail ambassador program, aimed at educating hikers. And in the future, some alternatives may be explored, such as setting up a reservation system for the trails, or closing portions of the routes to give local property owners near the trailheads a break.

Last week’s meeting, held virtually on the Zoom videoconferencing setup,  attracted nearly 100 participants, which may go down as a record in GMF. Not surprisingly, the forum wasn’t short on public comment.

But for several hours, the trail proponents clearly outnumbered the detractors, who supported the plan to close all trails and trailheads.  Trail supporters cited the closure plan as way too severe of a measure and one that would harm business and clash with the town’s reputation as a hiking gem.  Trail use opponents, though, contended that  the closure would give town officials and leaders a necessary time-out to develop a better plan for access and to come up with a more comprehensive trails’ system.

Prior to any public comment, Mayor Jane Newberry made it clear that closing the trails was the most drastic proposal, and that the board was mainly looking for solutions. She cited a growing problem since the coronavirus epidemic and even previously, with growing crowds and an influx of more hikers due to the closure of the Manitou Incline route and the Waldo Canyon area.

She said  many comments on social media have falsely accused the board of  being anti-trails. “This is a continuation of a previous meeting,” said Newberry, in describing last week’s hearing. “Don’t panic.  We are listening to the people.”

Those cautionary words, though, did little to quell the overriding “don’t shut our trails down” sentiment from many area residents and hiking enthusiasts. The trail buffs  clearly had the advantage in numbers and comment at last week’s hearing.

Dick Bratton, a nearly 40-year resident and the grand-daddy of the local trails’ movement in GMF, described the closure plan as too severe and asked for a delay in any action to shut down the trails.

“That would be a terrible thing to do,” said Bratton.” It just doesn’t make any sense…That is not the way to go. It is just too severe.”

He and other trail buffs urged the board to assemble a working group to consider alternatives to combat “bad hiking behavior.”

Mike Frey, co-owner of the new Painted Bear gift shop went further and classified the closure plan as a fatal blow to the local economy, which would slice sales tax revenue for GMF. In addition, he stated that closure action clashes with GMF’s recent comprehensive plan that advocates use of the local trails and encourages more specialty shops, such as the Painted Bear. Plus, he said once you shut the door to hikers, they may not come back.

“Is there a plan to reopen (the trails)?” asked Frey. “If we chase these hikers off, then we may  not have the opportunity to bring them back.”

The pro-trail sentiments also were supported by one of the  leading trails and open space representatives in the region, Susan Davies. “You folks are legendary,” said Davies, when lauding GMF for its trail development and safety program. “We will help you with a volunteer safety program. A lot of what you are talking about is bad hiking behavior,” added Davies, who serves as executive director of the Colorado Springs-based Trails and Open Space Coalition.

The Growing Price of Trail Use

The local trail-loving affair, though, has some detractors, as evident at last week’s hearing. And several supporters of the resolution to close the trails are former trustees and civic 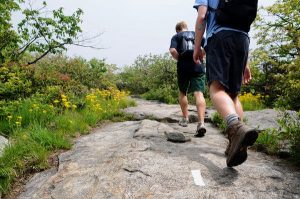 leaders, who wield much influence locally. “In my opinion, these trails need to be closed until we have a safer access,” said resident Mac Pitrone, who has served as past trustee for 20-plus years. He criticized the antics of hikers, accusing them of littering and not cleaning up after the pets, and questioned how much they contribute to the local economy.

Pitrone, who lives near the Mount Dewey trailhead, said the entire trail system needs to be reviewed and to  better respect the rights of actual GMF residents. “There is a cost to keeping the trails open,” blasted Pitrone.

Similar sentiments were voiced by property owner and former trustee Ralph LoCascio.  He questioned if current GMF policies favor hikers over the citizens of GMF. He urged the board to support the current trail closure resolution to protect the residents. “Safety is not to be compromised,” said LoCascio.

And Clay Gafford, a property owner and former president of the local chamber of commerce, questioned the legality of some of the trailheads and routes, noting that a few of them are located on U.S. Forest Service property. He also noted that current residential roads are now being used as hiker trails.  Gafford had earlier proposed shutting down the trails as a temporary move to enable town leaders to develop  a better long-range plan. He cited the community of Palmer Lake as a good  model to follow.

His earlier comments prompted the board to temporarily shut down GMF’s newest hiking route, Mount Dewey. This route, which offers hikers a more mountain-like climb, features probably the shortest link from the downtown area to the trailhead.  (At last week’s meeting, though, the trustees agreed to reopen this route due to a new agreement between the property owners.)

Supporter of the “shut the trails down” resolution argue that the current crowd situation is uncontrollable and beyond the current resources of GMF.

Some suggested a few compromises, dealing with more restrictions.

Rebecca Ochkie, a member of the former trails committee, proposed a possible compromise, suggesting that certain trail routes get closed occasionally to give property owners in that area of town a needed break. “We hate to hear the unhappiness of people living near the trailheads,” said Ochkie.

Prior to last week’s discussion, Trustee Dyani Loo researched what other communities are doing in grappling with growing crowds of hikers, who are using their trails. She suggested a reservation system or even a way certain people could use the trails on certain days, based on the letters of their last names.

The mayor stated too that the town could not  ban use from out-of-town residents. “That is discriminatory,” said Newberry.

In their final deliberations, the board made it clear they didn’t want to close the town trails. At the same time, they toiled over an end-game to deal with the issues surrounding growing crowds of hikers.

Trustee Margaret Peterson wanted to continue the discussion onto the next board meeting and keep the trails closure resolution alive. She expressed concerns about going back to square one.

But this plan wasn’t supported by the majority of trustees.

“I like the idea of a volunteer trails ambassador program,” said Trustee Chris Quinn.  “I don’t support closing the trails at this time.” “Again, it is hiker behavior,” added Trustee Kathryn Guthrie.

This was the main  view echoed by the majority of the trustees.

The future of an ambassador program will be explored by the newly formed Parks, Recreation and Trails Advisory Committee.  The town’s former trails committee has been disbanded, an issue that still conjures up some bad blood in the community, with mixed opinions about the role of this former group. Some town leaders accuse this group of being too independent and not accountable to the trustees.

Former group leaders, though, laud the work they performed over the last few decades and contend that you can’t argue with success.

In other action, Town Manager Angie Sprang stated that the town has been awarded close to $70,000 in CARE (Coronavirus Aid, Relief and Economic Security Act) funds. The trustees believe a portion of these monies could go to help with an unbudgeted law enforcement officer to help with some of the illegal parking and trail use complaints and help rally more community support for their compliance efforts.

“Community policing is not about the marshal. Community policing is about  community involvement,” said Marshal Virgil Hodges, who said he is very particular about whom he hires to help man the town’s law enforcement work. He believes some of these funds could  be paid to current volunteer reserves, who currently don’t receive any money.