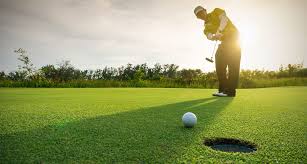 The Shining Mountain Golf Course and Event Center will be hosting a golf tournament to support the Woodland Park High School football, with a tee-off time slated for this Friday at 8 a.m.

This year the tournament is being sponsored by two former students and football players, Nick Brown and Mike Schommer, who have made efforts to give back to the school and to the community.

Brown played in several sports during high school and was part of the last team that experienced a state championship game in 2001. He now owns High Country Healing, which has four marijuana dispensaries across the state. In addition,  he also recently bought the football team a new trailer to haul all of its gear.

Schommer was also a high school graduate who played sports during high school and now operates Schommer Construction. He has been donating for the Coach D Foundation for a long time that gives scholarships to kids who make a difference in the community. The foundation is dedicated to the late Panther football coach and teacher,  Coach Richard Dispenza, known as “Coach D.”

It was important to the two former players to sponsor this year’s tournament because of the untimely death of two previous coaches, Mark Sampson and Dan Makris. They both passed away last spring.

Schommer and Brown both played under all three former coaches–Sampson, Markris and Coach D– and remember what these football skippers taught them.

Brown specifically remembers the coaching styles of the three teacher/coaches.

“What those guys taught me alone was gigantic for my life,” Brown said. “The purity those men loved children with is unmatched. And they did it with a fiery, passionate personality as well. They really left a big impression on me as I’m sure they did with all of the children that were lucky enough to be part of life with them in Woodland Park. They taught me to wake up every day and be the same person every day for one. It didn’t matter what was going on in their lives. I knew exactly what kind of guy I was going to get every day they walked in the door for practice or as teachers at school. They were pure with their love for what they did, for children and just for being good to people. I love that about them and I take that with me every day.”

Schommer agreed that skills the coaches taught him have helped sculpt who he is today. “Playing here in Woodland Park has taught me self-discipline; it has taught me how to care about others and how to be a team player,” Schommer said. “Honestly, I don’t think I would have the success I have today if it wasn’t for people like Coach D (Dispenza), Coach Holley, Coach Makris, Coach Sam (Sampson). They all had an impact in my life back in the day that I reflect on even when I am making decisions today.”

Both former players want to help keep the football program running strong so that kids of the future can have the chances they had. “I would say that sports helped shape my character and shape my work ethic,” Brown said. “Anything you do in this world you are going to need a work ethic and a backbone for. That’s what sports really taught me.”

As for the keys to having a championship-worthy team again in Woodland Park (like the two played on in the early 2000’s), the two former players agreed that times have changed in the local prep football scene.

Both former players said that they have faith in the team’s coach Joe Roskam, and think he is very good for the program. But unfortunately, they note the Woodland Park football skipper is facing issues that did not exist 20 years ago.

Brown said more students now have the option of going to schools in Manitou Springs or Colorado Springs  to play sports with better opportunities for certain students. As a result, Woodland Park may be losing players to other schools down the pass.

Schommer said that when he played on the team,  there were more students wanting to play football. Now, with the fear of concussions looming, many parents may not want their children to play pigskin.

The golf tournament is scheduled for this Friday for a shotgun (best-ball-type format) start at 8 a.m. All of the proceeds of the event go towards equipment and costs associated with the high school football team.

According to football coach Roskam, there are still several openings for teams of four golfers to play. To sign up for a team in the tournament, e-mail Roskam at jroskam@wpsdk12.org or go to the Woodland Park Football Facebook home page at facebook.com/wppantherfootball/.  There also is a sign-up sheet at Shining Mountain.