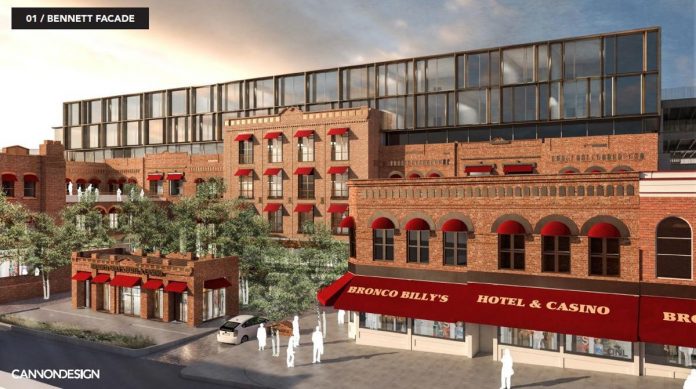 The most complex and elaborate casino/hotel and resort expansion project proposed in Cripple Creek has been put on hold due to the COVID-19 pandemic.

As a result, the owners of Bronco Billy’s, Full House Resorts, has sought the release of its nearly $1 million project performance bond for the first phase of the development due to financial concerns they have encountered.

Following a hearing last week, the company got its wish, except for a small portion that must remain in place, in case the developers walk away entirely.

“It is a serious decision for the city,” said Cripple Creek Community Development Director Bill Gray during last week’s meeting. He admitted that past policies frowned on city officials from taking this action. 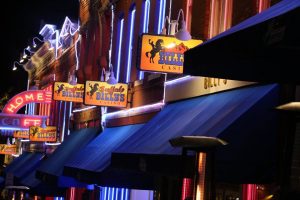 At the same time, he admitted the city and the entire nation is confronted with an unprecedented economic time, especially for the Las Vegas-based Full House  Resorts. “Everyone is talking about a return to normal. We want to have a successful Full House Resorts,” said Gray.

Gray proposed releasing the majority of the performance bond, except for approximately $150,000, which would foot the bill for projected infrastructure costs that may have to occur in this area, if the project doesn’t happen. In addition, he requested an amended development agreement and regular six- month reviews of the project. “We don’t want this hanging out there,” added Gray.

The development director maintained that relinquishing performance bonds was a stance that the city normally didn’t advocate.  During the early years of gaming, the city was sometimes plagued by casino projects that started and then were abandoned. This gave the city a  black eye, and became an obstacle for their historic preservation pursuits.

In a detailed presentation, Dan Lee, chief executive officer of Full House Resorts, made it clear that the company was clearly committed to the project, but just could not proceed with it right now due to the current financial situation. “We still intend to build this,” said Lee. The Full House Resorts CEO said the company had dealt with all kinds of natural disasters, but never experienced anything like the coronavirus pandemic. “I never envisioned all casinos would be closing across the country,” said Lee. “The pandemic is unprecedented.”

Moreover, he said it put a big strain on their company, which sports casinos in five different markets.

In a letter to the city, he asked for a spirit of mutual cooperation. “In a crisis like this, none of us can go it alone.  We must all work together to make it through these challenging times and solve the problems exacerbated by this unprecedented pandemic,” stated Lee.

He was asking for the temporary release of their $700,000-plus performance bond, until they resume construction. The company, in turn, would improve the site by constructing a temporary outdoor casino parking lot and do other needed enhancements in the site area.

When will the Grand Hotel Get Built? 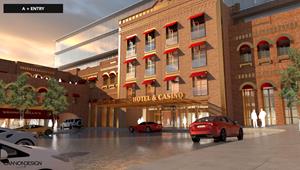 The council greeted the request with a sense of understanding, but with some angst. For the most part, elected leaders were more concerned about the timetable for the proposed $100 million-plus development, highlighted by a four-star hotel and an elaborate parking garage. This development marked probably the most intensive expansion pursuit proposed in Cripple Creek’s post-gaming history, with the vacation of a key roadway.  In fact,  leaders in 2018 granted a project of special merit so the development could move forward. Their original bid sparked a spree of  lively city meetings, with most residents favoring the development.

At the time, city leaders and the project developers cited the proposed Bronco Billy’s hotel as a sign of changing times, with Cripple Creek needing to take the next move towards becoming more of a vacation, resort area and a destination place that welcomed several-day stays and featured a lot more overnight lodging accommodations.

“What are the assurances?” asked Councilwoman Meghan Rozell, in inquiring about the request. She indicated that many people in the community, even prior to the pandemic, were “feeling very nervous” about the project’s future. She indicated rumors were circulating that the project wasn’t going to happen.

“I don’t want to walk away from the project,” replied Lee, who cited his background in finishing development projects he started. He said the company has already invested $5 million to $6 million in design costs for the development. “We just can’t do it today.”

More specifically, he cited problems in the financial market scenario, as a result of the coronavirus epidemic.

In his letter to the city, Lee emphasized that with the release of the performance bond, the company could put more money towards their employees and operations.

Investing money into their employees needs to be a priority, according to Councilwoman Melissa Trenary, if the request is granted.

Lee said the request would help the company gain much ground from an operational standpoint, and assured the council that it would construct a parking lot for the summer season and make needed improvements to the site.

And with the reopening of casinos in most markets across the country, he said business has been quite good, even in Cripple Creek. The company, in fact, was earlier going to shut down the Christmas Casino. But with the social distancing rules, it agreed to keep this facility open.

He admitted the original opening date of 2021 for the hotel would be set back slightly, with the decision to temporarily halt construction.  Lee didn’t mention a definite completion date.

“I want to see this project,” said Rozell, in making a final plea. “I don’t want my heart broken.”

She told Lee that the council gave their company a lot of leeway in granting the original project of merit designation, allowing them to bypass many of the city’s stringent historic preservation rules. As a result, she emphasized that city leaders and residents didn’t want to be deceived.

The council unanimously approved the request to temporarily rescind the performance bond, except for a $150,000 amount for remaining assurances. It also agreed to get regular status reports of Full House Resorts’ progress with the project and require them to amend their original development agreement.