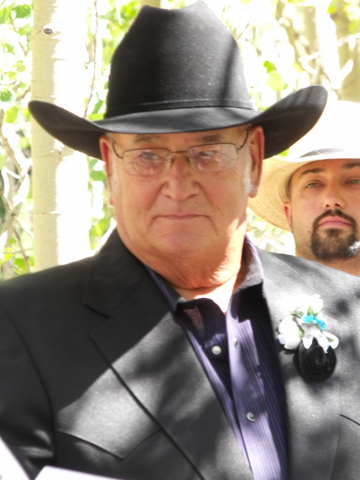 Beloved husband, father, grandpa, uncle, brother, friend…passed away
unexpectedly at home, in the presence of his wife, Brenda. Many of you knew of his 2- year battle with spinal cord damage, a battle he was determined to conquer. Den, as everyone knew him, lived a life that was full of adventure, saying often that he “had done everything in his life he wanted to do”. A cowboy first, he had a big heart and was known for reaching out to anyone in need. He was stubborn, independent, ornery and had little patience for things that didn’t make sense. His sense of humor was rich, his knowledge about so many things, wide and large, and he loved nothing more than using his brilliant mind to solve problems and seek resolutions. His beloved bass boat, the Tressa E. was his truest passion. Bass fishing was what he loved and he never stopped seeking a way to be in his boat once
again. His beloved dogs, one always with him, were a delight. Den played guitar, and had a gift for playing and singing. He had a successful band for 25 years and was working on a music project to share in church. An avid bow hunter, he shared, with his sons, a passion for all things outdoors. He could find his way out of anywhere, and some of the best memories left behind are of those days hunting, fishing
and tromping through the woods. Den was an experienced horseman, excellent marksman, pilot, scuba diver, the owner of numerous businesses, a trapper, fisherman and so many other things. He was a superb fly fisherman; in fact, anything he did he did with a level of excellence hard to replicate. His many close friendships were a delight-he had a knack for convincing everyone to buy the best baits or
gear for every situation-and he loved being asked for advice. He loved challenges, he loved his wife, he loved his life. His children, all of them, were deeply loved by Den. He was known to tell anyone who would listen of their accomplishments, where they worked, what they did, how proud he was of each of them. Den took things straight on, facing challenges with a ‘get it done’ attitude. He was tough and to
the point but he never held a grudge and would do anything for anyone. His later-in-life marriage to his wife Brenda was, as he said, “the best decision he ever made”. She is, as he is to her, his heart. Their journey of the past two years was one of difficulty, but was always, always filled with love and laughter. Their deep love, friendship and faith will be what sustains her in the years to come. He leaves behind the best part of him-the children he fathered, adopted, fostered, raised and cared for-they were his heart and soul. Den was a strong, complex and yet simple man who never let life keep him down for long. His faith in God was infinite and he knew when all was said and done where he would go. He adored being a grandpa, Pop-Pop Riley…and will truly miss the little ones. Den is no longer here, but his presence will
remain. Rest in peace my love, good journey. A celebration of Den’s life is being planned at a later date.