Home Front Page News Locals Show Support for Divide Bar and Restaurant
Facebook
Twitter
Pinterest
WhatsApp
~ by Trevor Phipps ~
As a result of recent actions taken by the Teller County Health Department against local bars and restaurants, a group of locals decided to schedule two multiple peaceful protesting events.
On Thursday, a crowd of 80 to 100 locals showed up at Russ Place bar and restaurant to protest the fact that the business recently received a cease and desist order from the county officials. Many thought the tone of the letter was inappropriate and decided to launch a public protest to support Russ’ Place and all local restaurants. 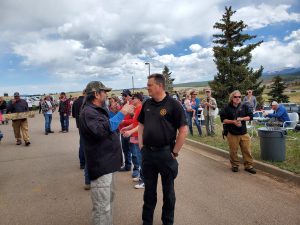 After hearing the news the owners of Russ’ Place decided to shut down their establishment and offer drinks, burgers, and hot dogs on a donation basis only for the protesters that showed up to support their nearly decade-old business.
During the event, several people from different counties including many who are running for political office in Teller, Park, and Chaffee counties made appearances at the event. The protesters could be seen toting American flags and pro-freedom signs.

hands of the people that were there. Mikesell said that the rules the county has been forced to follow came directly from the state and that he did not feel that it was within his authority to put forth measures to stop any sort of peaceful protest or assembly because such actions were protected by the U.S. Constitution.

Another peaceful protest is scheduled for this Saturday starting at 9 a.m. at the Woodland Station property in the downtown part of the city. At noon the Historic Ute Inn is planning on making a re-opening during the same day after the protesting event.