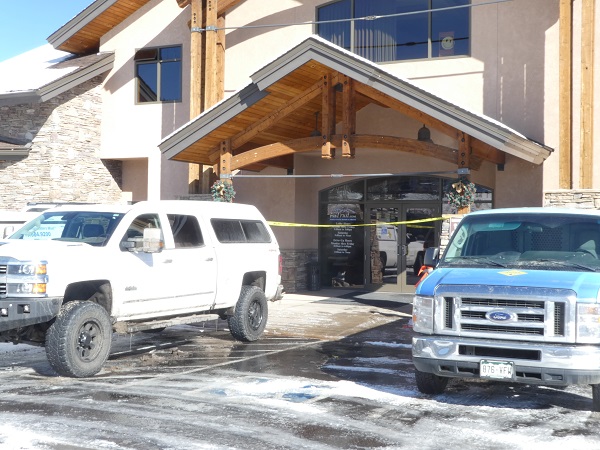 An investigation continues into an internal fire that occurred inside the Park State Bank & Trust facility on the early morning hours of Jan. 27.

Authorities still haven’t determined the exact cause of the incident, which didn’t result in any injuries.

On the upside, the bank has returned to normal operations, after undergoing some intense mitigation efforts for several days.

According to Park State bank officials, the fire occurred under a soffit on the east side of the building shortly after 3 a.m. on Jan. 27. The fire damage was mitigated by the bank’s sprinkler system. In an official statement, bank president Tony Perry said, ‘The sprinkler system did such a great job that we are now assessing the damage, root cause, and have begun mitigation efforts.”

The fire, though, did cause extensive damage in parts of the facility.

After being closed on Jan. 27, only the drive-through was operating both Tuesday and Wednesday, as teams were assessing interior damage and air quality was low, according to bank officials. All first-floor flooring has to be removed and will be replaced. As of Thursday, operations resumed for team members with all employees working on the second floor.

Yellow tape was displayed in front of the bank entrance during much of last week to allow experts to assess the damage.

In a statement on the Woodland Park Chamber of Commerce’s Grapevine page, the bank offered thanks to emergency service officials, insurance and damage exerts and    local customers.

“PSBT wishes to thank Chief (Tyler) Lambert and the NE Fire Protection team for responding quickly and preventing the fire from spreading throughout the building. Thanks are also due to both Joy Pickett of The Insurance Center, who quickly had a team out to assess the claim, and Michael Whittemore and his 1-800-Water Damage team which immediately began mitigating damage and preparing to return the building to full service as quickly as possible Thank you also to the city of Woodland Park and the many, many bank customers who offered help. It is a privilege to be a part of this wonderful community.”

The one casualty is the forthcoming Woodland Park Chamber of Commerce After Hours gathering, originally planned at the bank next month.

Due to building repairs, the Chamber After Hours event for Feb. 18 will still be hosted by PSBT, but the event will occur at the Ute Pass Cultural Center. This is the third time the site for the forthcoming February After Hours has been changed.