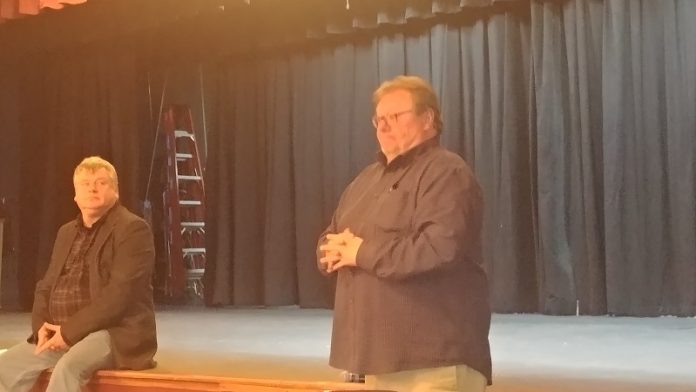 Last Saturday, officials from the city of Cripple Creek offered a sneak peek of the upcoming 2020 Butte Theater season and addressed questions by community residents.

Earlier last week, the Butte Theater manager Mel Moser sent out a mass e-mail inviting the public to the meeting in order to clear up some rumors that the theater was shutting its doors. The rumors occurred  after the city recently made the move to switch theater production companies by discontinuing the Mountain Repertoire Theater Company’s contract, and resigning the Thin Air Theater Company to put on shows at the city funded Butte Theater. TATC previously did shows at the Butte for 10 years.

Moser started the meeting, held in front of a crowd of around 50 people, by introducing other city officials, including City Administrator Mark Campbell and Jeff Mosher, the city’s new marketing and special events director. 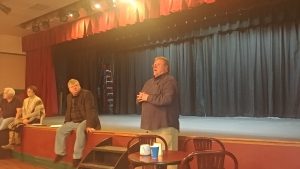 The theater manager then addressed the crowd and passed out a list of the shows that the theater will be putting on for the 2020 season. He told the meeting attendees that the schedule was developed to go back to having more classic melodramas, but he assured everyone that the Butte would be hosting other performances such as musicals.

Moser said that he has heard community concerns, hinting that the city was turning its back on their arts program and the theater. Moser stressed that this rumor was not true. In fact, Moser said he was the main person that led the recent changes, rather than the city. More importantly, he said the city has offered strong support for the Butte.

The theater manager said the impetus of the changes was to have  theater go back to producing more locally historical classic melodramas, citing the fact that the majority of their funding comes from historical preservation funds.

“I want to touch on one more point why it is important that we remember our history and we remember the classic melodrama,” Moser explained. “We receive 100 percent of our funding, let me say that one more time, 100 percent of our funding comes from historical preservation funding. The reason they are supporting the Butte and the reason the city is using their historical funding for the Butte is because we are a historical building yes, but we are one of four houses (in the country), there are only three other houses that are involved with the classic melodrama.”

Moser also talked about the history of the Butte theater and his involvement with the theater.

The city officials addressed a number of questions from the audience regarding the theater’s new direction.

Questions were raised about the old Star casino building, located next door to the Butte. Campbell told the crowd that the city had recently bought the building towards the end of last year, just a few weeks ago.

He said that the city had been leasing the building and paying for its maintenance for quite some time. As a result, it made sense that the city purchase the building. The city administrator also said that not much would change with the building and that it would still be used to build sets for the Butte. He did say though, that there have been ideas to use a portion of the building as housing for the professional Butte Theater actors, but they have yet to move forward with the plan.

The rest of the questions asked during the sneak peek session had to do with programming, and how children and others in the community could be involved with performances at the theater. The crowd also made some suggestions referring to how children in the community could get paid to perform in the productions. They also gave ideas of community events to have at the theater before the professional season starts, including a showing of the old country-western movie from the 1950s entitled “Cripple Creek.”

During the sneak peek session, Moser said the upcoming season will have two separate schedules including a community schedule and a professional season. According to Moser, the community season will run from Jan. to May and the theater will host a talent show, a performance by a mind bender from Las Vegas, and it will show several classic movies such as Disney films and famous musicals.

The professional schedule will have at least five productions that will run from mid-May through December. During the Christmas show, children and other members from the community will have the opportunity to audition to perform.

Here are some of the highlights of the forthcoming professional season:

Under The Colorado Sun

This classic Victorian melodrama was written by Thin Air Theater Company’s playwright Chris Sorensen and it is a new adaptation of Quida’s “Under Two Flags.” The story is about a man from New York who fakes his death and flees to Cripple Creek for a new life. The production will be accompanied by an all new olio that will entertain the audience during scene changes.

This classic musical was first produced for Broadway in 1949 and then it was later made into a film in 1953. The performance will feature classic songs such as “Diamonds are a girl’s best friend” that was most famously performed by actress Marilyn Monroe.

I Ought To Be In Pictures

This famous comedy-drama play was the 18th written by Neil Simon and it originally opened at Broadway in 1980. The play was later made into a classic film in 1982 that starred actors Walter Matthau and Ann Margaret. This production that will be shown during the late summer season is about a struggling writer, his daughter and his on-again / off-again girlfriend.

Haunting At The Old Homestead

The Thin Air Theater Company’s own playwright Chris Sorensen comes back this fall for another performance that is set in the famous mining town. The production is about spirits that start scaring away guests at Cripple Creek’s famous brothel the Old Homestead. Famous prostitute from the gold rush era Pearl DeVere then decides to recruit three “ghostbusters” to help her rid the property of spirits.

The final show of the season will feature local actors of all ages as well as the professional crew. This unique holiday-themed performance is producer Armbrister and playwright Sorensen’s rendition of a Dickens classic and it will take the audience through a “perfect past, present, and future holiday experience.”