Last week the girls Woodland Park b-ballers challenged opponents on the courts for the first time of the 2019-2020 season. The team didn’t start off their season on a bad note, as they carded a 1-1 record. More importantly, they trounced a recent Pueblo opponent by a nearly two to one margin.

The Lady Panthers started off their season on December 2 during a home game versus George Washington High School. The girls struggled during their first match as they lost by a large 68-22 margin.

The girls then played their second home game last Thursday night and they prevailed big time. The Lady Panthers dominated when they went up against Pueblo Centennial on their home court when and won by a convincing 67-36 margin.

So far, the team’s leader on the offense is Sarah Iskra as she has averaged over 12 points per game during the team’s first two matches. Defensively Sage Drummond has taken charge by averaging seven rebounds each game.

Next week, the girls only play one match which is their first home game against the 0-2 Pueblo County Hornets. Hopefully the Lady Panthers keep up their momentum as the Hornets remain winless.  They then play more non-conference games this month and practice for their league matches that count towards playoffs later on in the season. 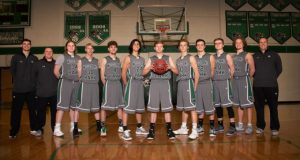 The boys’ Woodland Park basketball team also started playing on the courts last week and they tipped off their 2019-2020 season with a home game against Pueblo County. The Panthers fought hard during their season opener but they still fell behind and lost by a close score of 51-48.

The team’s start to the season was not as good as it could have been, but the fact that they kept  the score close is a good sign. The male basketball team has a similar schedule to their lady counterparts as they practice during the first part of their season by playing teams that are not in their league. This means that the first few games of the Panther season do not count towards their chances of seeing post season play in 2020.

During their first game, senior guard Markus Eiselein took control of the team’s offense,  tallying up 15 points,nearly double the points any other player on the Panther team earned. Seniors Joey Babin and Hunter Peel also had an impressive start to the season as they racked up eight points apiece during their inaugural match for 2019.

This week, the boys have more time to fine tune their skills as they travel to the mountains up in the northern part of the state to play a tournament in Steamboat Springs. The Panthers play a total of three games during the tournament this weekend, and they kick off the b-ball action by challenging the 0-2 Steamboat Springs Sailors.

The Lady Panthers hit the pool last week as they competed in two tournaments.

The rather new swimming team, which started its second season at the high school this year, plunged into the competitive waters during a tournament on the road in Salida last Wednesday.

he girls then held their first home tournament against Platte Canyon last Saturday. The girls continue on their 2019-2020 season by challenging Englewood at home this Saturday at 10 a.m.

The Lady Panthers had a rough inaugural season last year as the team was rather inexperienced and they swam against tough teams that have well-established programs. This year, the girls have more practice swimming for competition and their schedule is planned out better in 2019 and 2020 than it was last season meaning. This means they will compete against schools that are more on an equal swimming foot as Woodland Park.

The Panther grapplers have had pretty impressive seasons the last two years as they had a presence at the state championship tournament in early 2019. Last year, the boys proved that they have some competitive wrestlers on the mats and they are back again to show their opponents that things haven’t changed too much in the WP high country.

Wrestling coach Keith Sieracki returns to the forefront this season. He  is looking towards another successful year, perhaps with more stars on the mats than last year. The training the coach provides off-season has helped him build star wrestlers for his team.

The Panther wrestlers get their first chance to pin their opponents this week when they start off their 2019-2020 season on the road against Elizabeth. The boys then travel to Pueblo East this Saturday for a mat battle the second time this year. Optimism is running high that the WP boy grapplers stay tough this season, and send fellow wrestlers to state for the second year in a row.

This year the Ice Panthers return to the frozen rinks for the third time since the team has existed. In their inaugural year in 2017/2018, the WP ice fanatics had trouble winning games as they played well-established hockey teams.

But last year, the boys showed that having a little experience behind them pays off. The boys barely fell short of making it to the playoffs as they earned a quite impressive 4-5-1 league record.

This year, the hockey team should be even better, since most of the Panther players come onto the ice from club teams that offer competitive leagues. Moreover, it is a safe bet to say that the Panther team will get more  competitive in their league play and make a run at the  CHSAA’s frozen post-season ice battlefield.

his season, the team did make a change with their head coaching position. When the high school first decided to add a hockey team to their winter sports lineup, Chad Mason was drafted as the team’s first head skipper. After being the man in charge for the team’s first two years, he has passed the reins onto Travis Seabolt who will be leading the team for the 2019-2020 season.