Even with a still lean gaming device lineup, the city of Cripple Creek has adopted a 2020 budget that runs on par with previous years.

And once again, the town boasts of one of the lowest tax rates in the region, with residents getting hit with a whopping 2.13 mill levy. This is much lower than the tax rate set in such municipalities as Woodland Park,  Green Mountain Falls and Victor.

These are some of the highlights of the final fiscal discussion for the 2019 year.

With little discussion, the city council last week signed off on a fiscal blueprint for next year, calling for a $12.15 million spending package, with a general fund of $8.57 million.

According to Finance Director Paul Harris, this runs parallel to past years. The city will spend considerably more next year for capital improvements on Bennett Avenue. But the finance chief cites few changes from the current budget.

The big stumbling block for the city is the lack of betting devices, with statistics indicating the local gaming community is still registering a 30 percent decline in devices and games of chance from the peak period about 10 years ago. That’s a big factor for the city’s budget process. The city is only projecting about 3,590 betting devices at the outset of next year. Device fee revenue is the main funding tool for the city government.

The city is generating some more money for lodging revenue, with the city taking in about $240,000 annually, based on the new lodging tax. The bulk of this goes towards marketing and special events.

However, the city is still in limbo land as far as major lodging expansions. If several casino expansion projects come to fruition, the town government could experience a substantial hike in lodging tax dollars. Three big lodging endeavors have been proposed by the Wildwood, Bronco Billy’s and Triple Crown casinos. Out of these, the Wildwood is the only one that has hit initial pay dirt.

The other big fiscal unknown is the impact of future sports betting, which will be allowed at licensed casinos probably around late spring or early summer of 2020. How this will impact the city from a revenue standpoint is still a big question mark.

Harris said the city will save a little money too on its new theater contract with the Thin Air Theatre Company, which did shows at the Butte for 10 years. 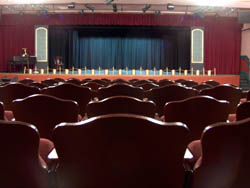 However, bad blood is still circulating between the group that ran the Butte for the last two years, the Butte Theater Foundation, and the city.

City officials disagree with this assessment, contending a clause existed for cancellation.  Moreover, officials maintain they want to return to the way the theater operated in the past, with the city taking a larger management role. The city does plan to purchase the Star building, located adjacent to the Butte theater, to give the Butte more room and to offer a better outlet for storing equipment and sets. The city also wants to deal directly with the Thin Air Theater Company, giving them a set amount for producing shows, with the city keeping all the proceeds.

The Foundation leaders are still reeling over getting the boot, following the 2019 season. “It is unfortunate that the city of Cripple Creek has elected to turn the clock back on a vigorous performing arts program advocated by the Foundation. The program was well on its way to making Cripple Creek a known performing arts center with attendant increases in general business for the city and significant community participation. This paragon was the result of the Foundation’s vision for Cripple Creek, its professional theater management, financial grants and the dedicated efforts of Foundation officers, directors and trustees,” concluded the group.

But Foundation critics have accused the group of “biting off the hand that feeds you.” In previous interviews, City Administrator Mark Campbell indicated the previous arrangement between the city and the Butte Theater Foundation just wasn’t working and cited duplication of costs.

Other than the theater showdown, the 2019 budget season was rather uneventful in Cripple Creek.