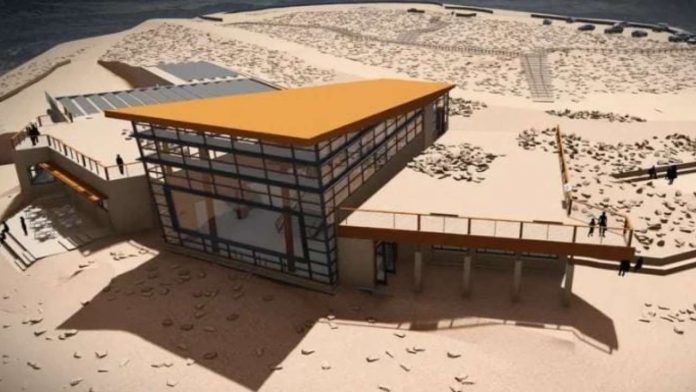 crews have been working on the interior of the new Pikes Peak Summit House Complex.

The $20 million project is slated for completion for late summer, 2020, according to most estimates. The success or failure of this effort could play a major role in determining the future of tourism in the Pikes Peak region.

One fact remains certain, the new Summit structure is unique and unprecedented for a visitor center located on top of a 14,000-foot-plus peak.

Work was completed on the exterior in November to allow for the work to progress. Part of the

process involved closing all exterior openings and installing the roof.

Because of the severe weather conditions, which include extremely high winds and

sub-zero conditions, the work location is unique, which required workers to take extra

precautions to ensure that all small openings and cracks are sealed. The overall goal is to

prevent wind from blowing snow into the interior of the 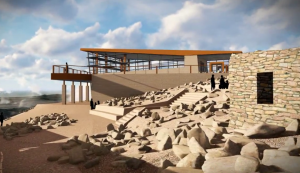 Propane heaters have been installed to keep the interior warm. The bottom floor, which

houses the mechanical operations, is kept warm with one heater. Other heaters are keeping the

second floor warm, where the administrative offices, kitchen and dining room will be located.

Structural window testing was completed in September and passed the stringent

requirements for the summit’s extreme conditions. The construction company has also finished

a second revision of the exterior envelope to coordinate final details of windows, waterproofing,

steel-plate sills, and shutter design. The foundations are complete and the walls were placed in October.

The precast panels are 14 inches thick with eight inches of geo-foam insulation in the center.

Insulation is also sprayed into the ceilings. The amount of insulation has an R40 rating, which is

extremely high for commercial construction projects, which normally have R18 in the walls and

handrail supports will be installed in the spring. Structural steel for the building frame and roof

was installed in November.

The structural steel is 90 percent complete, but the roof decking and grand staircase will be

installed in the spring.

Temporary window assemblies have been installed, which will facilitate building the

Before the end of the month, crews will complete installation of roof slabs, interior slab and

temporary window assemblies, which will help build the mechanical and electrical rooms.

Now that the building has been sealed against the weather, interior finishes, such as office

space, the kitchen and dining hall can proceed throughout the winter.

Heat systems are scheduled to be installed in January 2020. This will help prepare the

building for significant developments over the course of the year.

The existing Summit House remains open throughout the construction.

Once completed, the 33,000 square foot building will live in balance with the summit’s unique

environment. Nearly 750,000 people visit the summit each year, contributing $30 million to the

During the construction period, a shuttle system was set up to take visitors up and down America’s famous mountain. Local business leaders have cited the importance of this project, with tourism numbers in the region heavily dependent on Pikes Peak Highway traffic and Summit House visitation.

The facility is designed to comply with the Americans with Disabilities Act standards,

ensuring that the center will be accessible to all citizens, regardless of age or disability. It will

the design of the new Pikes Peak Summit House.

A one-story form seemingly carved from the southeast side of the Peak, the new Summit

House offers unobstructed views to the east. Reminiscent of the crags and rock formations

found above the tree line, the design uses shade, shadows and fragmentation to coalesce into

the Peak. Clad in material similar to Pikes Peak granite, the modern hue seamlessly blends into

the mountainside. Viewed from below, it is one with the mountain, yet as one arrives at the

Peak, the modest entry pavilion is a clear destination.

Upon approach to the summit, visitors take in the expansive and pristine views, just as

capped with weathering steel emerging from grade. Sited to frame the view of Mt. Rosa, the

location from where Pike viewed the Peak in 1806, the pavilion’s lobby will provide a sheltered

area to view the surrounding landscape, while affording access to the main level of the Summit

Accentuating the relationship between the two landforms, the angle from Pikes

Peak to Mt. Rosa will be reflected in the downward tip of the lobby walls. That same angle will

be mirrored in the upward slope of the roof acknowledging the expansive views to the east. To

the left and right, rooftop terraces will become an extension of the summit, blending with the

to “America the Beautiful”.

An extended platform to the north will provide optimal views of the ruins of the original 1873 Summit House and embraces the relationship with the cog. Inside, visitors will be taken aback by the boundless sky and perfectly framed views of Mt. Rosa. Stairs to the main level will appear to fold down out of the mountain as visitors descend to the main floor to access exhibits, dining, a gift shop and restrooms. Warm, rustic colors fortified by the ceiling’s beetle kill pine will uniquely tie the interior to the region.

Those arriving via cog (once it reopens in 2021) will be given the choice to explore the Peak, interpret the ruins, or enter the Summit House via the main level. Providing access to these multiple destinations will naturally disperse the crowds, resulting in a more enjoyable individual experience.

Captivating, but also functional, the building is sited to take advantage of the unique

environmental conditions present on the top of Pikes Peak. Nestled into the mountain, exposure

to the harsh winds will be minimized, while the mass of the building will provide sheltered

outdoor areas from which to enjoy the views.

The orientation of the building to the south takes full advantage of the enhanced solar gain at altitude, including daylight harvesting and the incorporation of photovoltaics to generate electricity. In addition, the thermal mass of the building’s stone cladding helps capture and radiate heat generated by the sun to the interior of the building. Other sustainable features include composting toilets and low flow fixtures to conserve water.