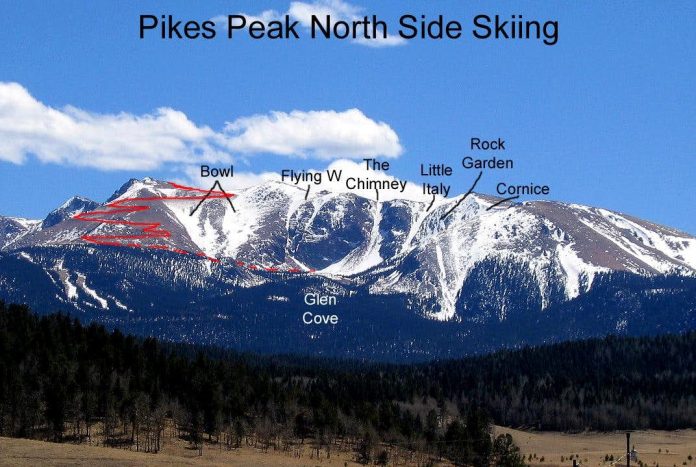 ~ by Bob Volpe ~
Tired of paying exorbitant prices for lift tickets at the resort ski areas?
If you have the gumption and a sense of adventure, you can find free skiing on that big rock just to our south, Pikes Peak.
Or, you can test your more moderate Nordic legs at such ideal playgrounds as the Crags, Muller State Park and Dome Rock.
There are a number of places on the peak you can ski, but perhaps the most popular and most dangerous is the couloir known as “Little Italy.”
Little Italy is not for the faint of heart. It is a dangerous descent with the potential to kill. Over the years several experience skiers and snowboarders have lost their lives trying to navigate this run.
While Little Italy is the best known run on the north face of the peak, there are several other couloirs on the north face, but these others are rarely skiable and are at 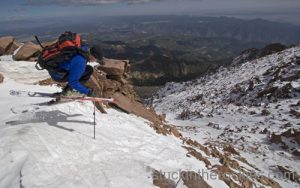 least as dangerous as Little Italy. For the sake of conversation I will mention their names, but be aware you will have to do your own research as to conditions and best times of the year to ski these runs. The runs are: Y Couloir East, Summit House Couloir, Railroad Couloir, Couloir Direct, and Y Couloir.
I should mention that while it is the winter season, the best time of the year to ski any of the peak runs is early spring. Most of these reported “death runs” are accessible around the Devils Playground pull-off area, and often involve a little cross-country trekking to reach your slope of choice. A variety of slopes shoot off to the Glen Cove halfway point, a few of which are tamable if you try them with a large group. But with the current highway summit project, check with the Pikes Peak Highway for the best way to access both the Devils Playground and Glen Cove destinations, especially in the spring.
The north face of the peak is the most recognizable of the runs on the peak as seen from Woodland Park. But these are not the only places you can ski.
The east face of Pikes Peak is the face seen from Colorado Springs. This is the face that nearly half a million people see every day. This is by far the easiest way to ski 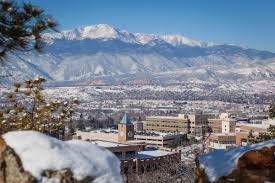 Pikes from the summit. Due to its low angle, lack of wind loading, and eastern exposure to the sun, this face is of minimal concern (note that I did not say “no” avalanche concern). Let me explain the term “easiest.” None of these runs is without risk and should only be attempted by seasoned experts and at the right time of year.

The East Face. This slanting gully that slashes the east face of Pikes begins just to the south of the summit and drops you off near treeline. The corniced convexity at the top has slid in the past and killed people, so BEWARE.

Once you drop off the summit, the angle gets less and less steep as you descend the face, picking your way down the gully. On a good snow day, this would afford some excellent skiing. However, due its aspect, this line gets baked by the sun and rots out early in the spring. This run is rated intermediate/difficult.
Another east facing run is Dogleg Couloir. This run is is rated intermediate/difficult. You access Dogleg Couloir from Old Stage Road.
Now for some runs which are more manageable for the less experienced skiers. The first I’ll describe is High Drive. High Drive is a forest service road that is closed to vehicles in winter. This area is the closest place to Colorado Springs to find low angle skiing with a dependable base through the winter months. Cross country skiers will need to skin up to climb to a spot as high up High Drive as you like or until you run out of snow. Once you’ve made it up as far as you’re willing to go, simply turn around for a pleasant and mellow return trip.
Another less difficult place to ski the peak is the old Pikes Peak ski area. The Pikes Peak Ski Area was in operation from 1939 to 1984. At one time it featured several rope tows and even a triple chair. However, poor snow conditions and financial issues forced the area to close. Now the clear cut trails are slowly being filled in with saplings.
A very easily accessible area right off the Pikes Peak Highway that allows for lots of low-angle skiing. Also, the aspect of this area usually keeps the snow soft long after storms. 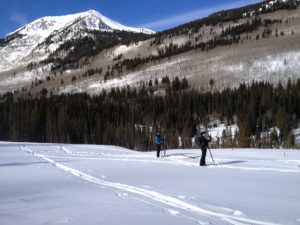 From the Pikes Peak Highway, you can see all of the old ski runs and choose to skin up whichever one looks best. In general, the lines on the looker’s left side of the resort are steeper. Skin all the way to the top, rip your skins, and pick your way down through the trees back to where you started.
This is only a sample of the possibilities to ski the peak. There are a meriad of other runs but to list them all would take a book to write about.
The caveat to free skiing the Peak is, you still have to pay to drive up the Pikes Peak Highway. The adult fee is $15 per adult. A car load of up to 5 people is $50. The road is now open to the top even while construction of the new summit house is still going on. Please note that weather conditions determine if the Pikes Peak summit is open, call 719-385-7325 to check for road conditions. The road is open from 9 a.m. to 5 p.m. daily. Don’t get caught leaving the peak late or you’ll be fined.
No matter where you ski in the back-country there are a few things you should know. Never ski alone, be prepared for changing condition in the weather and the snow pack, learn all you can about avalanches, carry a collapsible shovel and an avalanche beacon with you when skiing the back-country, always let someone know when you expect to return home in case something happens to you, and it’s also a good idea to have an emergency kit along with you. This kit should include the above mentioned shovel, avalanche beacon, and a space blanket, fire starter, a headlamp (in case you wind up out after dark unexpectedly), extra gloves, a closed cell foam pad, extra batteries, some duct tape, a multi-tool, and don’t forget your cell phone.
And remember, winter is a serious season. Always check with the proper authority as to avalanche conditions before you go. Don’t do anything beyond your skill level or your physical ability.
Experience the Crags and Mueller State Park
For those of you of a less adventurous bent, the Crags campground, operated by the U.S. Forest Service, is another place cross country sliders can find to spend a day enjoying the silence of winter. With the recent heavy snows we’ve had the Crags road is likely closed at the Mennonite Camp, located just south of Divide off Hwy. 67. So you’ll have to ski the road to get to the trailhead. The Crags, though, thrives in ideal snow conditions, if you can get there. Due to where it is located, the snow lasts there for a longer period than other parts of Teller. Also, the Crags sports the most direct route up to the top of America’s famous mountain.
It also is a great place to take your dogs for winter treks.
Another nice place to cross-country ski is Mueller State Park. Again since we’ve had such a great snowfall already this year, this is a great option. There are miles and 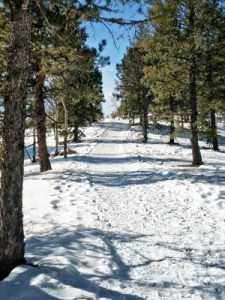 miles of trails and open meadows for skiers of beginner to intermediate level. Call the park at (719) 687-2366 for current conditions. They conduct scheduled hikes and ski treks on the weekends.
Another good option is Dome Rock, located off the Four Mile road, via Hwy 67. Dome Rock is actually considered part of the Mueller State Park system. It serves as one of the best-kept ski and hiking secrets in the area, and is the hangout for herds of big horn sheep.