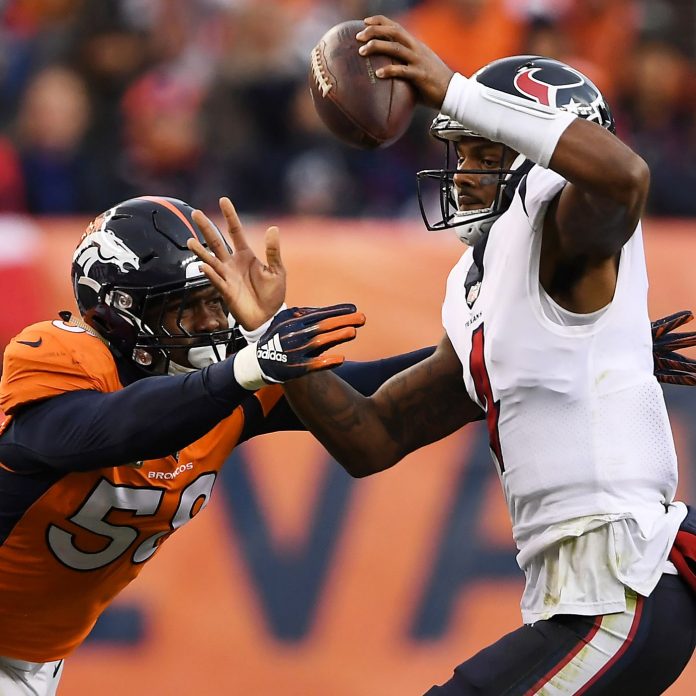 Next week the Broncos travel again. This time to the Lone Star State to take on the Houston Texans.

round pick quarterback in last year’s draft. Was it an oversight? NOOOOO. The Bronco coaching staff has been playing footsy with playing Lock since Flacco went out with a neck injury in week 8.

For the Broncos, the play of backup quarterback Brandon Allen started with a bang and ended with a whimper. Allen’s record as a Bronco starter is 1-3. In his first game as a Bronco, Allen had a QB rating of 125, but he progressively devolved, (is that an oxymoron?), sinking to a 61 rating against the Vikings, and bottomed out with a rating of 32 against the Bills in week eleven. The 20-3 loss in Buffalo was the worst offensive showing by the Broncos in 27 years.

Last week, the Broncos put down Phillip Rivers and the Chargers once and for all this season. In week five the Broncos, still with Flacco at the helm, beat the Chargers 20-13 in LA.

Now we have Lock under center for the remainder of the season, barring an injury or complete rookie melt down. In his first NFL start the young feller showed great confidence and poise. He threw 2 TD passes to Courtland Sutton in the first quarter and managed the rest of the game like a pro.

As I mentioned last week, this Charger’s game was one of 3 possible wins for the Broncos for the remaining schedule. Next week against the Texans ain’t one of the remaining 2.

The Texans at 7-4 hosted the New England Patriots last Sunday night and toasted the Pats 28-22. The final score was not even close to the beating the Texans put on Brady 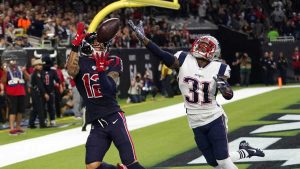 With Deshaun Watson under center the Texans are one of those NFL teams with a quarterback who can run the ball in a pinch or deliver a strike to one of the Texan’s premier receivers.

DeAndre Hopkins is Watson’s primary receiver. Last week he was getting as wide open as the Montana skies against the Pats. Hopkins added to his stats with a little razzle-dazzle 6-yard touchdown pass to Watson as well. His career reception average is 14 yards per catch.

Watson is no one receiver quarterback though. He’s an equal opportunity passer. While Hopkins kept the chains moving with third down catches, Watson was busy throwing touchdown passes to his tightend Darren Fells, running back Duke Johnson, and wide receiver Kenny Stills.

When it comes to rushing, the Texans have Duke Johnson who is averaging 5.8 yards per carry. Last week against the Pats, he didn’t have to run much. Watson was having so much success with the pass they didn’t need to run the ball. That doesn’t mean they can’t do it if they need to when they have a guy averaging over 5 yards per carry. 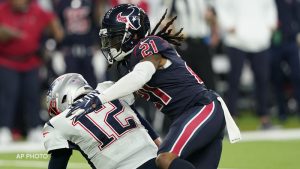 On defense, the Texans put the wood to Brady last week. They pressured him constantly and sacked him 3 times.

The Texans are now in first place in the AFC South at 8-4, one game ahead of the Titans and they aren’t going to give that first place up without a fight next week.

The question is, can Drew Lock pull off another win in his second NFL start?

The answer is likely not, but what the hey, this season is all about draft position for the Broncos now. So all we Bronco fans can hope for is a good showing from Lock and for him to continue on his growth path.

As a side note, the Broncos benched left tackle Garrett (holds) Boles and the O-line didn’t give up a sack against the Chargers dynamic duo outside rushers Melvin Ingram and Joey Bosa.

So who knows? It ain’t over till the fat lady sings.