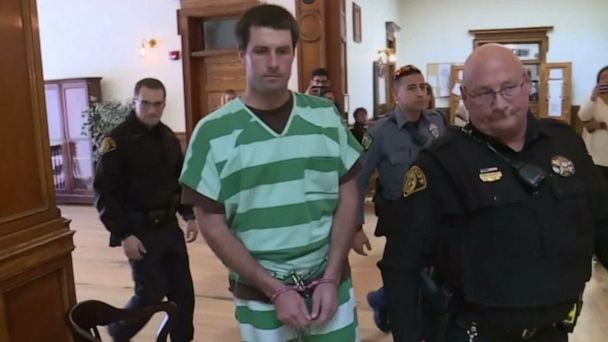 The second week of the Patrick Frazee murder trial ended last Friday after the prosecution summoned a slew of witnesses, including Frazee’s ex-girlfriend and mistress Krystal Lee.

Lee is one of the prime witnesses who is testifying against Frazee, accused of brutally beating his fiancé, Kelsey Berreth, to death last Thanksgiving in her Woodland Park condo with a baseball bat.

Last week, the prosecution presented the bulk of their evidence against Frazee. This was highlighted by the testimony of Krystal Lee Kenney, who now just uses the name Krystal Lee. She had an on and off-again relationship with Frazee for a number of years.

During Lee’s two days of emotional testimony, little new information was provided and she basically told the same story that has been released to the public for months, and that was highlighted in pre-trial hearings. While she was on the stand, however, the prosecutors did show pictures of Kelsey Berreth’s home and asked Lee to describe exactly what she had seen as soon as she walked into Berreth’s house, following the killing.  Frazee had reportedly asked Lee to clean up a mess he had made by beating Berreth with a baseball bat to death on Thanksgiving Day of 2018.

Lee used a laser pointer to show the court exactly where inside Berreth’s home that she saw blood spattered. Lee pointed to places inside Berreth’s condo, including Berreth’s floor and high up onto her walls where she said she cleaned blood stains. 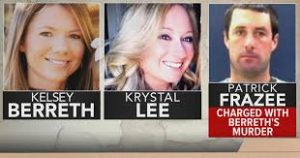 During her testimony, the prosecution team also showed a picture of Lee showing investigators a place on the floor where she said she had found one of Berreth’s teeth that was dislodged during the brutal murder committed by Frazee. The prosecutors also showed a picture of a bent curtain rod that Lee claimed she had bent while she removed blood stained curtains from Berreth’s home.

As a part of Lee’s testimony, the prosecutors showed videos of Lee leading investigators through the Nash Ranch where Berreth’s body was temporarily stored and around Frazee’s property, where Lee says the Florissant rancher burned Berreth’s dead body. In the videos, Lee pointed out where Frazee retrieved the tote containing Berreth’s body from the Nash ranch, and the exact location where she alleges that Frazee burned Berreth’s remains.

Lee told the court that she decided to tell the story of what had exactly occurred so that Berreth’s family could know the truth about what happened to the missing Woodland Park mother, who was missing since Thanksgiving Day, 2018.

During the second week of the murder trial, the prosecutors have called up several witnesses to give testimonies that prove the integrity of Lee’s story. During opening arguments, the defense said that they believe Lee is fabricating her story to avoid going to jail. They also question why she didn’t contact authorities earlier.

Following Lee’s testimony, District Attorney Dan May’s team called two people to the stand that said they worked at the Frazee ranch. Both of Frazee’s former ranch hands claimed that Frazee paid them to cover up an area on Frazee’s property where burnt material existed.

During court last Friday, the prosecutors continued to call witnesses in attempts to help back up Lee’s story. The prosecution called to the stand a K-9 police officer who works for the Elizabeth Police Department and who belongs to a nonprofit organization called Necrosearch.

The officer testified to the fact that about two months after Frazee was arrested, he was asked to go to the Nash Ranch with his bloodhound named “Radar” to use his dog to search for signs of human decomposition.

The officer said that when he and his canine unit arrived at the Nash Ranch, he was asked to use Radar to search for the scent of human decomposition. He said that he 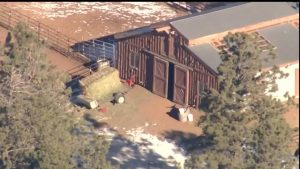 began searching a barn on the property and that Radar indicated that he may have picked something up at the bottom of a section of hay that appeared to be discolored at the top.

Once they were at the top of the stack, the police dog began searching the tops of all the haystacks.  Radar then indicated the presence of a decomposed human scent in the area that was noticeably discolored. The prosecutors then showed a picture of a haystack that was obviously discolored by what almost appeared to be some sort of black liquid staining.

After videos of the bloodhound detective Radar’s search were shown to the court, the prosecutors continued to present other witnesses that helped corroborate Lee’s story.

The prosecutors called to the stand an FBI agent who was involved in the case. The agent said that at one point investigators used canine units to search the property and that it wasn’t until Lee pointed out the exact location of the burn spot, they were able to recover the first possible known remains of Berreth.

The agent said that they dug in the spot Lee pointed out that looked discolored as if new dirt had been placed there. After the surface had been dug up, the team of investigators noticed burnt materials. During this search, investigators found a tooth that could have belonged to the missing woman.

A friend of Frazee’s also took the stand and described a conversation he had had with the Florissant rancher. He said that at one point he asked how Berreth was doing, and Frazee responded by saying that he figured out how he was going to kill Berreth.

The friend said that he told Frazee to stop thinking about that, and Frazee responded by saying, “no body, no crime.” The friend also said that Frazee was shocked when Berreth’s case made national attention, and said that “people go missing all the time.”

Before Frazee’s murder trial began, District Court Judge Scott Sells set strict rules as far as what would be allowed inside the courtroom. The Decorum of Order issued by the judge outlaws any sort of live reporting inside the court as well as any photographs, recording or sketch drawings.

During the trial, spectators can only enter when there is a break in court. Only reporters from verified media outlets can using laptops or cellphones to take notes during court proceedings.

These orders came into play last week, with Judge Scott Sells giving a member of the court audience a stern scolding, with the threat of possible jail time for violating this order.

Last Thursday, the judge ordered a recess and after he released the jurors he addressed a possible violation in the court’s rules. He said that he heard someone sitting in the general public section was drawing pictures of people on his notebook.

After the individual was pointed out by others inside the courtroom, the judge asked the person to go to the podium. The judge asked his name and asked him why he was drawing pictures. The person just said that he was “doodling” while taking notes.

The judge had deputies search his entire notebook and they found multiples drawings that looked like people. The judge ordered the deputies to tear out the sheets that contained drawings and told the person that he was going to hold the notes until the end of the trial.

He told the person that no drawings of witnesses or jurors were allowed at all, and that if he was caught drawing anything during the trial again, that he would be held in contempt of court and that the judge could sentence him up to six months in jail.

The trial resumes for the third week on Tuesday, with no court scheduled for Veterans Day.