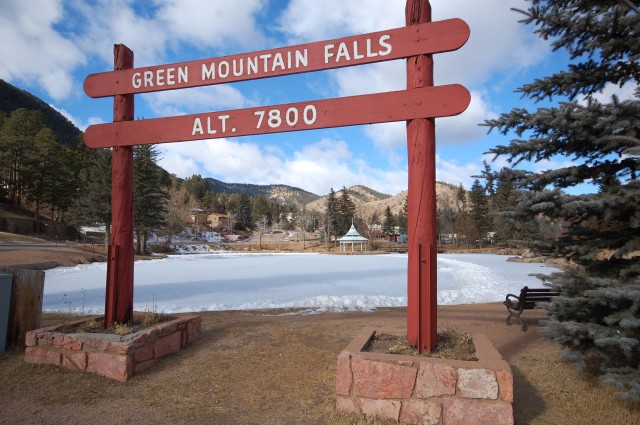 With the help of state officials, the town officials and leaders of Green Mountain Falls were given their marching orders for the next six months regarding major problems to address.

And the list is pretty ambitious, as officials must hit the ground running with new head manager Angie Sprang.

In a recent GMF workshop, Clay Brown, the regional director of the state Department of Local Affairs, who played a big role in the development of an $800,000 town hall facility for GMF, stressed the importance of setting realistic and long-term goals, and examining what the town can afford. He also relayed DOLA’s support of the town manager form of government. “You have to be a team,” said Brown, who also has done much consulting for the town of Victor.

Brown didn’t get any arguments from the trustees. “We have been reactionary for a long time,” said Trustee Margaret Peterson.

“We want to put into place manageable goals,” said Mayor Jane Newberry, who complimented the previous administration of Interim Town Manager John Pick several years ago. During Pick’s term, the town first experimented with the town manager form of government. Newberry said it gave the town a sense of confidence that it hasn’t been able to regain.

As for the top goals in the next few months, roads, roads and roads were stressed. New Town Manager Angie Sprang said the town wants to hire a public works manager and secure staff for that department. They have already interviewed one candidate for the position, but Sprang expressed a desire to have full staffing for that agency.

Road maintenance has become a sore spot for GMF for the last five year. The town has  mulled a variety of approaches from contracting out more work with El Paso County to reorganizing the agency, to securing grants. But no solutions have been met with much satisfaction among local residents.

Other than roads, a slew of issues were stressed including compiling a budget, updating ordinances, fixing the park, increasing/enhancing cell phone service, pursuing recommendations of their comprehensive plan consultants, addressing the growing bear woes, engaging more with social media, having amphitheater seating at the Gazebo, considering paving certain roads and mulling a central sewer system. A number of these ideas were thrown out by the new town  manager

That’s well and good, but unless fire mitigation is addressed, GMF may not survive, noted long-time resident Dick Bratton. “We may not have a town,” said Bratton. “It is a very serious and urgent problem.”

Bratton requested that the trustees select a committee to address this situation immediately.

“You are really situated in a hazardous place,” added Brown.

As a result of Bratton’s comments and those of other workshop attendees, the trustees agreed to emphasize strategies for wildfire mitigation as a top priority for the next three months.

Another key challenge is addressing recommendations from the town’s comprehensive master plan, recently adopted by the trustees. According to Bratton, the plan has a laundry target list of 261 recommendations. These recommendations are currently being addressed by the planning commission. Planners want to target immediate and short-term priorities from this $100,000 master plan blueprint, which was finalized several months ago.

These deal with a variety of ways to provide better economic development, commerce, land use, community cohesiveness, central services and amenities and environmental protection and much more. An important part of the new plan deals with hazard and wildfire mitigation.

That is extremely important, as GMF has been identified as way behind the curve in preparing for future disasters, such as the Waldo Canyon fire.  This horrific blaze forced the complete evacuation of the town for nearly two weeks and served s a wake-up call. Since then, fire and  emergency preparedness officials and tree experts have been trying to educate residents on ways to mitigate their properties.

In other news, Green Mountain Falls’ leaders spoke highly of their recent town potluck dinner at Sally Bush Community Center. According to Newberry, between 70 and 80 people attended, and the forum also offered a good insight into the wildfire dangers facing the community.

Many potluck attendees also volunteered for a number of committees.