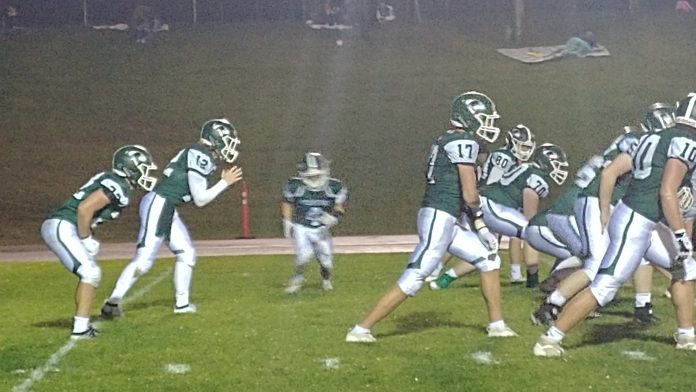 The Panther football team hit their home field under Friday Night Lights for the first time this year to kick off the start of their 2019-2020 pigskin season.

Unfortunately, Woodland Park was jolted by the cruel tricks of Mother Nature and by a tough and menacing Conifer team. The game was delayed twice due to lightning and foul weather, factors that may have tested the nerves of the Panthers a bit too much

After the delayed 8:15 p.m. start, the Panther boys seemed to be thrown off by the late starting game and ended up losing by a score of 35-6.

The boys were ramped up for the game all week. But when they were ready to take their first try of the season under Friday Night Lights, Mother Nature decided to display her own show as the sky was lit up with lightning. 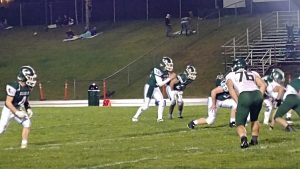 Late thunderstorms last Friday riddled the Woodland Park area with rain and thunder that could be heard rumbling over the town. The game was first delayed 15 minutes due to traffic delays the visiting Conifer Lobos team faced on their travels to the mountain town. Then, as lightning kept flashing and the thunder kept roaring at 7:15, the officials decided to suspend the game another hour.

At the scheduled late start time of 8:15, the rain had stopped and the storm had passed leaving behind only cool temperatures in the low 50’s. As soon as the two teams got on the field, the Lobos quickly started dominating the field.

The Lobos’ offense was on fire in the first part of the game as they quickly drove the ball down the field to score in the first quarter. The Lobos then scored a second time in the second quarter putting the Panthers into a 14-0 hole.

After the Lobos scored in the second quarter, the Panthers started showing some promise when they got the ball and made some good offensive plays driving the ball down past the 50-yard-line. But once they were in Lobos territory, they failed to get a first down and gave the ball back to the Lobos.

During this next possession, the Lobo offense took the field and quickly made a mistake that the Panther defense capitalized on. On second down, a bad snap sent the ball flying out of the hands of the Lobos’ quarterback. The ball bounced around for a second before the Panther defense fell on it giving the team a much needed turnover.

The Lobos’ offense got the ball back, and successfully drove down the field and scored another touchdown. The Lobos would score one more time before halftime putting the score to 28-0 at the game’s halfway mark. Ouch, as this conjured up memories of  last year’s season, when the Panthers failed to win a contest.

Too Little Too Late

During the second half of the game the tides changed a little in favor of the Panthers but it proved to be not enough. The Panther defense figured out how to better put a stop on the Lobo offense as they only allowed one touchdown in the second half.

The Panther offense did find their way in the end zone eventually but their efforts proved to be too little too late when they ended up only putting six points on the board all game.

With the opening loss, head Panther Coach Joe Roskam should know what areas the team needs to work on in practice this week. Devising a more potent offensive attack and doing better in the red zone would help are two goals the team may strive to improve.  The Panthers play their first game on the road this week against the Sierra Stallions. This is a school that appears to field a decent team every season.